The Shakespeare Project debuted on November 30th and December 1st, 2012 at Watertown High School. The play was about some of Shakespeare’s plays and sonnets all put together as one big play. The Shakespeare Project was created at Arizona State University, and first premiered at Parkland College in 2004. When entering the auditorium, there was a big picture of Shakespeare for the backdrop of the play, and many people attended. When it was time for the play to start, the director, Ms. Peters, came out and spoke to the audience about how hard the students worked and the purpose as to why they did this play. Ms. Peters hoped that students would develop an appreciation for Shakespeare’s works. The types of plays that were mentioned in The Shakespeare Project included The Tempest, Romeo and Juliet, Richard III, The Taming of The Shrew, A Midsummers Night’s Dream, Julius Caesar, The Merchant of Venice, Macbeth, Hamlet, Henry IV, and Henry V.

When the play finally started, some of the audience seem to enjoy it whereas others did not. Many members of the cast played many roles throughout The Shakespeare Project. A member of the audience, Jordan Terhune, said, “I found it entertaining, but not for the right reasons.” Another member of the audience, Olivia Murphy said, “it was a good play, I liked it.” People were laughing and having fun watching The Shakespeare Project, especially when there was a boxing match during part of The Taming of the Shrew. But some parts of the play were confusing when they moved from one of Shakespeare’s plays to another. Parts of the play were modernized like in the Romeo and Juliet section of the play Romeo was using a cell phone to communicate with Juliet. Another part was in the Julius Caesar section and there were reporters getting information from Caesar.

When the play ended there was a Q&A with the cast of the play. Cast member Anthony Russo said, “stress and lot of hard work was put into the making this play.” Many of the cast would agree with Anthony, especially Carina Taufiq, when she said, “even though we had some rough times, in the end we came together to give our best performance.” 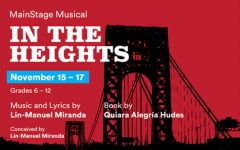 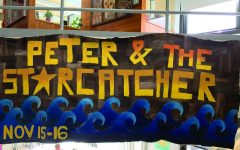 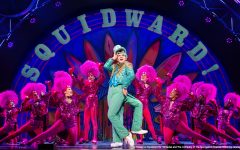 ‘The SpongeBob Musical’ a silly idea, so wonderfully done 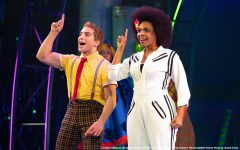