“Finding Neverland” a musical overflowing with joys of play

Enchanting story behind "Peter Pan" at A.R.T. in Cambridge through Sept. 28 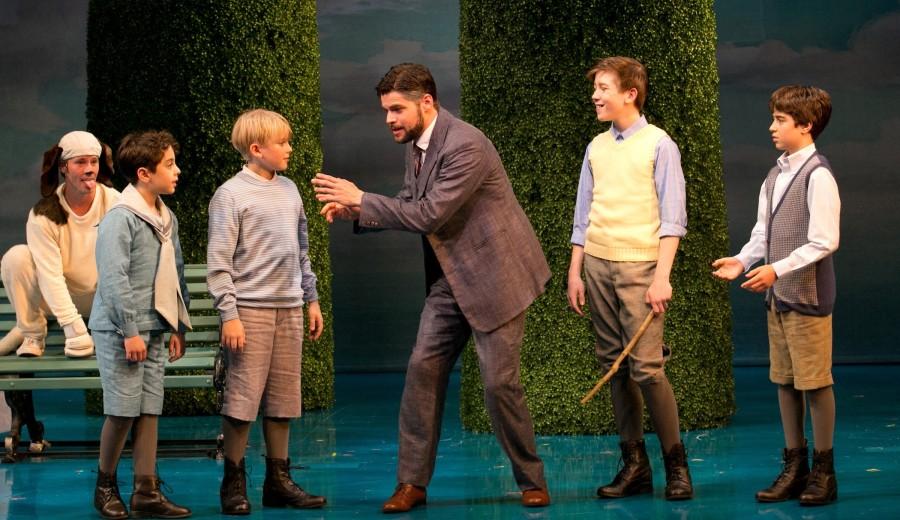 J. M. Barrie, Porthos, and the Llewelyn Davies boys play in Kensington Gardens in "Finding Neverland" at A.R.T. in Cambridge.

“Finding Neverland” is a show revealing the lesser-known story behind “Peter Pan.” It follows a famous but struggling playwright and his attempts to stay true to himself while creating another masterpiece.

This musical at the American Repertory Theater in Cambridge contained the perfect blend of tragedy, romance, and comedy. The best part of this musical was its  theme: The innocence only experienced through childhood is one that should never be lost too quickly. The show brought back memories of a more carefree and playful time, filled with dreams and imagination, and is reminiscent of classic pieces of children’s literature such as Dr. Seuss’s “The Cat in the Hat” or “Where the Wild Things Are” by Maurice Sendak.

The show showcased how “play” — which is often thought of as childish and immature — is necessary to everyones prosperity and happiness. It should never be looked down on. Even adults should experience “play” from time to time.

Alternating between fast- and slow-paced music, the show flowed seamlessly. From the servants to the Llewelyn Davies family, the casting was spot on.

Jeremy Jordan compassionately played Mr. J.M. Barrie making him extremely relatable and worth the audience’s sympathy. His duets with Laura Michelle Kelly, who played Sylvia Llewelyn Davies, were visually, lyrically, and emotionally beautiful. Michael McGrath did a wonderful job as Charles Frohman opening the show and being the slight villain and friend.

All four Llewelyn Davies boys were wonderful and the actors and servants performances only added to this amazing show!

The whole show was visually striking, from the appearances of beloved characters, like Peter Pan and Captain Hook, to the jubilant bar scene. The cast and crew definitely used the small stage to its full capacity. Flips and jumps could be seen everywhere by everyone.

The cutest scene had to be the Llewelyn Davies boys’ song “We’re All Made of Stars.” Other favorites include “We Own the Night,” “Rearranging the Furniture,” “Believe,” and “Better.” Surprisingly, every song had a message, making them heartfelt, memorable, and worth hearing again.

The choreography was tasteful — but who would expect less from Mia Michaels? The jaw-dropping special effects were exciting and drew eyes in every direction.

“Finding Neverland” is a wonderful show for people of all ages, with or without knowledge of the story of Peter Pan. It’s definitely worth seeing once, twice, maybe even three times!

(“Finding Neverland” at the American Repertory Theater in Cambridge through Sept. 28, 2014. For information and tickets, go to http://americanrepertorytheater.org/events/show/finding-neverland)