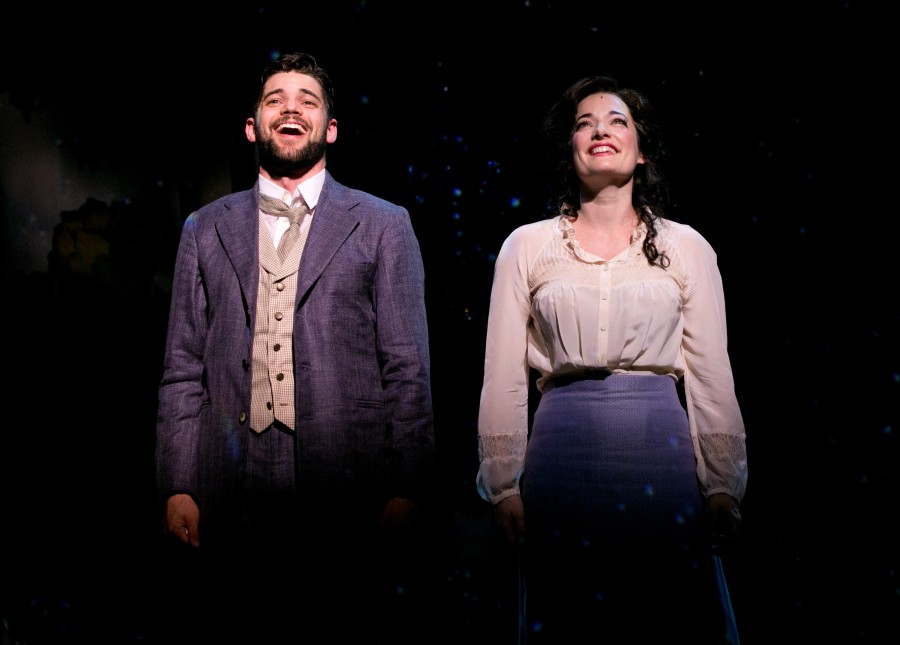 J. M. Barrie (played by Jeremy Jordan) and Sylvia Llewelyn Davies (Laura Michelle Kelly) have a musical moment in "Finding Neverland" at the American Repertory Theater in Cambridge through Sept. 28, 2014.

Following the recent movie-to-musical trend along with productions of  “Legally Blonde” (2007), “Shrek” (2008), and yes, even Bono’s “Spiderman: Turn Off the Dark” (2011), “Finding Neverland” undoubtedly belongs with them on the stages of Broadway.

Based on the 2004 film of the same name, “Finding Neverland” follows J.M. Barrie, a struggling playwright looking for his next source of inspiration, and his path toward creating his next theatrical hit, “Peter Pan.” Through loss, jealousy, and sacrifice, Barrie and the Llewelyn Davies family learn the importance of staying true to yourself, and the magic of one’s own imagination.

Told through song and dance, this production is wildly enjoyable. Not only is the story entertaining in itself, but the technical work and music are flawless as well. Featuring a live band, “Finding Neverland” is graced with incredibly talented musicians drawn from prestigious ensembles like those found on Broadway, and quite a few players can be found among the Boston Pops. And for those theater-goers who enjoy a more modern sounding musical, you’re in for a pleasant surprise since “Neverland” features more pop-oriented music — a nice contrast the the early 20th century storyline.

Don’t get too caught up in the almost unreal perfections of the music though, or you might miss some of the musical’s visual delights like the gorgeous costuming and quickly transforming set pieces. Also make sure to look for the whimsical choreography of “So You Think You Can Dance” judge Mia Michaels, who has incorporated ballet-bees, dancing crocodiles, fearsome yet light-footed pirates, and of course, Barrie’s hip-popping dog, Porthos.

This star-studded cast, featuring Jeremy Jordan as J.M. Barrie, and crew make for one magical performance that will leave you breathless (especially the young actors playing the Davies boys; seriously, how are they so talented already?!).

Catch the show before it leaves in late September, and make sure to stick around after the show to meet the cast!

(“Finding Neverland” at the American Repertory Theater in Cambridge through Sept. 28, 2014. For information and tickets, go to http://americanrepertorytheater.org/events/show/finding-neverland)