Legacy of Ella Fitzgerald comes to life in Watertown 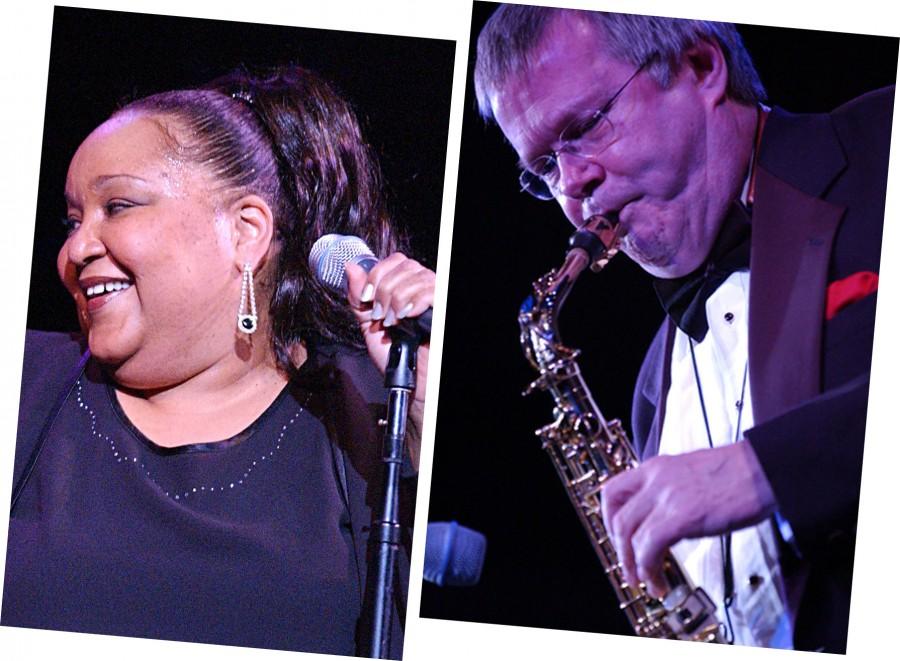 Donna McElroy (left) and Larry Monroe, both members of the Berklee College of Music faculty, were front and center at the Ella Fitzgerald legacy concert at the Arsenal Center for the Arts in Watertown on Oct. 18, 2014.

The audience applauded as five men in suits and ties, and one woman in an elegant black and pink dress with hair pulled back in a tight bun, entered the dark  theater. The musicians settled in at their microphones and began to play “A Tisket, A Tasket.” As soon as she opened her mouth, Donna McElroy’s huge voice and stage presence completely filled the black box theater.

She riffed, she scatted, she belted, and her range was incredible. Even when her voice was barely above a whisper, she seized the audience’s attention.

My message is: Learn lots of styles of music. Learn artists, learn composers.”

McElroy was the center of the Legacy of Ella Fitzgerald Concert on Oct. 18 at the Arsenal Center for the Arts in Watertown. The concert featured hits such as “Can’t Help Lovin Dat Man Of Mine,” “I Could Write A Book,” and “Imagine My Frustration,” and it was only the beginning of a lineup of great American Songbook concerts that are being offered in the 2014-2015 season.

The musicians accompanying McElroy were no less skilled. Reliably incredible solos were given each and every song by alto saxophonist Larry Monroe, pianist Russell Hoffmann, string bassist John Repucci, trumpeter Jeff Stout, and drummer Ron Savage. The performers were very relaxed and comfortable; they laughed, joked, and made fun of each other between songs.

All of these musicians, including McElroy, are Berklee College of Music faculty members who came together to perform jazz music in honor of the late jazz legend, Ella Fitzgerald.

Ella was an celebrated and well-loved singer who was discovered at the Apollo Theater in Harlem in 1934. Her tremendously successful career spanned more than four decades. Fitzgerald’s “songbook” albums, which almost exhaust all of the great ballads, jazz, bee-bop, and pop songs of her time, remain treasured classics to this day.

Judging by quality of the Ella show, this concert series at the Arsenal Center is a must see. Upcoming events to look out for are performances remembering the work of Louis Armstrong, Sarah Vaughan, and Nat King Cole.

McElroy talked with the Raider Times after her performance.

Raider Times: Where did you grow up?

RT: Where and what did you study?

RT: Do you perform other genres of music, or just mainly jazz?

RT: Is jazz your favorite?

DM: Music is my favorite. I don’t have a favorite style.

RT: That’s a good answer. How do you find jazz vocally different from gospel?

DM: Vocally, in jazz you’ve got to think more like an instrument. And many notes, and you have to have the technique to be able to go to those notes at will, and your intonation has got to be really on pitch. In gospel, you can slide around, you can wiggle, you can have a lot of vibrato. In jazz, you don’t have time for a lot of vibrato because the notes are going by so fast you have to have a technique of precision.

RT: With the scatting, do you improvise some or have you memorized all the sounds you make?

DM: Well what I do is I shed, which means today I got up at 7 a.m. and I started listening to Ella Fitzgerald. And I wrote out maybe one or two little ideas that she did that stuck with me. Like the ornithology melody, that’s traditional, I’ve known that melody all my life, and its played over those chord progressions for “How High the Moon” and I just listen to how she phrased them, where she placed them in her improvisation. One thing about Ella Fitzgerald is they gave her lots of choruses; this concert was not so giving. There were lots of breaks for the musicians, but not so many for the singer, but I think its because this is not Ella Fitzgerald, this is Larry Monroe, Jeff Stout, etc., and everybody’s got to have a little piece of the action. But when Ella was on stage, everybody was just mesmerized by her. She had endless ideas, was endlessly flowing with ideas. So they couldn’t get enough of her.

RT: What message do you have for young people hoping to become singers or musicians?

DM: My message is: Learn lots of styles of music. Learn artists, learn composers; make the difference between when you’re announcing your song, whether you’re saying I’m going to sing “How High the Moon” by Ella Fitzgerald, or I’m going to sing “How High the Moon” by the person who wrote it, because that’s who you should be saying. Now if Mariah Carey wrote the tune, then you say Mariah Carey, but if Mariah Carey didn’t write the tune, she’s just singing the tune, then you need to find out who the writer is. Because just like that song attracted Mariah Carey to it, those writers may have written more songs, and you as a young singer can listen to more of their music. So as much as you’re interested in the artistry, be interested in the composition.

Kira Peterson is in her third year as a member of the Raider Times staff (2013-2016). She has previously served as the Arts and Entertainment editor.