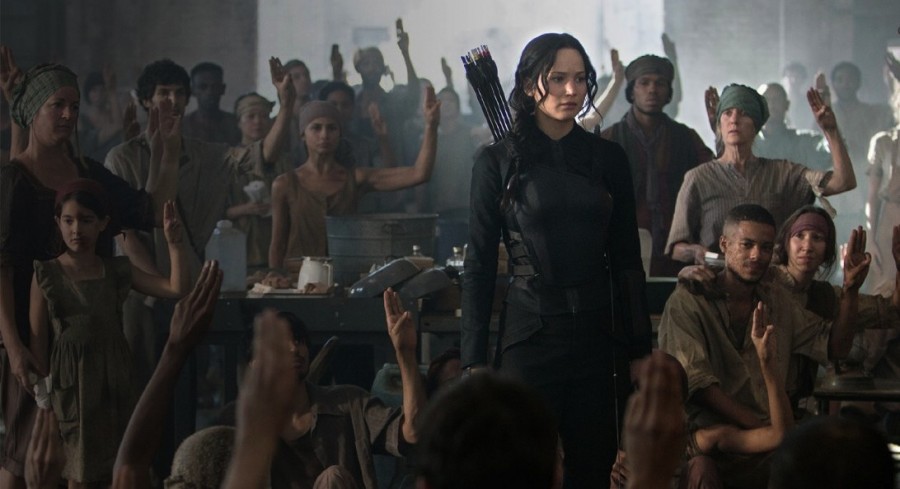 Katnis Everdeen (Jennifer Lawrence) is in the middle of the rebellion in "Hunger Games: Mockingjay, Part 1."

Part 1 of the final installment of the “Hunger Games” came out Friday, Nov. 21, and “Mockingjay, Part 1” is the best movie of the series. At the turn of a scene, there is suspense, humor, tension, sympathy… it’s one movie no one should miss out on.

The movie starts off where the story let off, after Katniss Everdeen (Jennifer Lawrence) shoots the arrow of defiance in Hunger Games arena, she finds herself in District 13. This is the city of rebellion, all the citizens and leaders in here are against the Capital.

They ask Katniss to be their “Mockingjay,” a symbol of rebellion to the Capital, and also a symbol to gather up all the districts in rebellion. The Capital in return uses Peeta Mellark (Josh Hutcherson) to advocate and tell people to back off on being rebellious.

They are not going to back down, it is war, the people vs. the capital. Who will stand?

The director, Francis Lawrence, has a whole new setting, many new and less of old characters. So for those who have not read the books (like me!) or have not watched the first two movies, do not worry. As long as you have heard of the movies and the books, you will not have a hard time following along or enjoying the movie.

I watched the movie with someone who had read all the books, and she was so impressed with “Mockingjay, Part 1,” saying, “All of the previous movies were good, but this one was off the chains!”

I give this movie a 4 ½-star movie rating (out of five). And I recommend all kinds of people to go watch it, young and old.