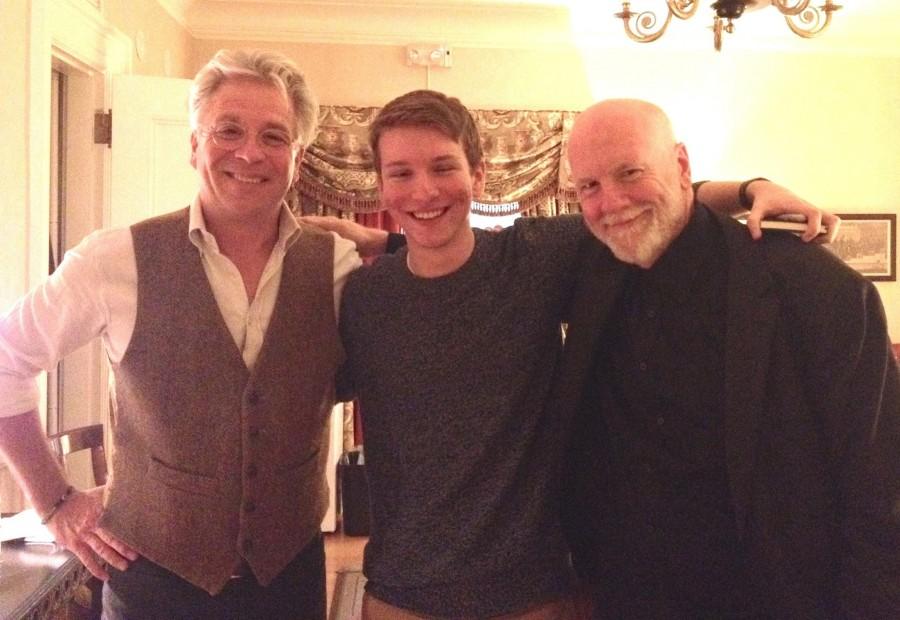 Trumpeter Håkan Hardenberger (left) and composer Brett Dean (right) with a reporter from the Raider Times at Boston Symphony Orchestra on Nov. 15, 2014.

On the night of Nov. 15, 2014, the Boston Symphony Orchestra had the privilege of performing the American premiere of composer Brett Dean’s new trumpet concerto, “Dramatis Personae.” Håkan Hardenberger was the soloist featured in this piece.

This concerto is far from the conventional works usually played by the BSO and other major orchestras as it depicts the life of a superhero, based on modern films and comics.

Hardenberger, the soloist for whom the piece was specially written, is one of the most famous virtuosic trumpet soloists of all time. The whole 30-minute-long concerto is a wild and dramatic showcase of every facet of the trumpet’s character.

The first movement of the concerto, “Fall of a Superhero,” establishes the trumpet as protagonist of the story, the embodiment of good. The orchestra plays the role of the antagonist, trying to squelch the superhero. The movement is rich with chaos and excitement from the jarring themes that are aggressively passed back and forth between the orchestra and solo trumpet in a combative tone.

The middle movement, “Soliloquy,” acts as the equivalent of a Shakespearean monologue. The trumpet’s tone switches from combative to pensive as the theme of reflecting on oneself is developed.

The final movement, “The Accidental Revolutionary,” is based on the old Charlie Chaplin film “Modern Times,” in which the main character accidentally becomes the leader of a group of striking workers.

In the midst of the hectic and slightly humorous mood of the last movement, the solo trumpet completes his story by walking across the stage to join the orchestra’s trumpet section, symbolizing the Superhero working with the people.

There is a relatively limited solo repertoire for the trumpet, so Mr. Hardenberger looks to today’s composers to expand it, often commissioning pieces from composers that feature the trumpet.

After the concert, I had the chance to meet Mr. Hardenberger and ask him what it’s like to premiere a piece and play something that’s never been heard before, to which he replied, “You’ll understand when you’re a father.”

Mr. Hardenberger is truly a trailblazer in the world of classical music and even more so in the trumpet subculture. His virtuosic technique has made him able to play things that nobody else in the world can.

Mr. Hardenberger’s capabilities have taken away almost all limits to composing for the trumpet and has given the instrument free reign to live to its full potential.

(To purchase a High School Card from the BSO and get free tickets to many concerts just like this one, visit the BSO box office or go to http://www.bso.org/brands/bso/education-community/young-musicians/highschool-card.aspx.)

Chris Rohlicek is a member of the Raider Times staff in 2014-15.