“Moana” is a triumph!

Newest Disney film blows "Frozen" out of the water 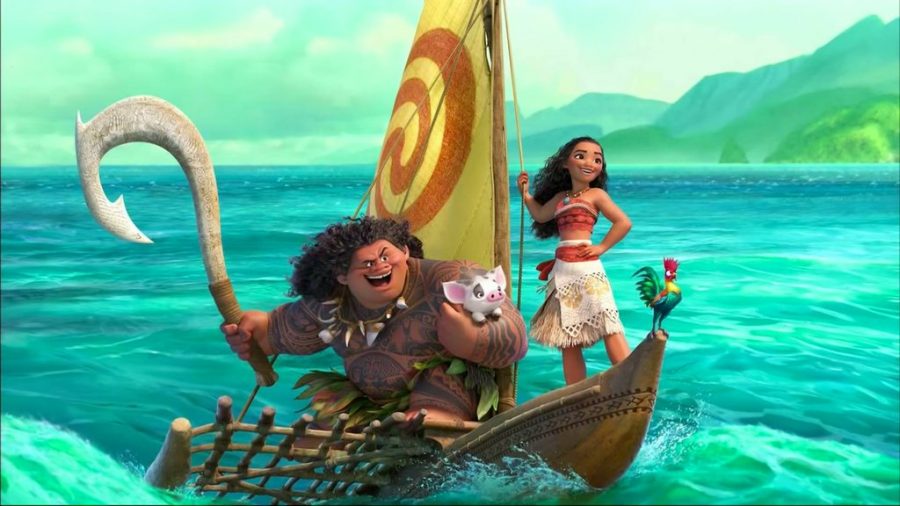 “Moana” is a triumph on Disney’s part. The film as a whole is wonderful, with beautiful animation and cinematography, music that will stick in your head for hours, and characters that you can’t help but feel a personal connection to.

The movie as a whole is outstanding, blowing “Frozen” out of the — pardon the pun — ocean. (If you don’t understand: “Moana” means “ocean or large expanse of water” in Polynesian). Everything about “Moana” is inviting and opening and I can think of no one who wouldn’t like it.

Moana (voiced by Auli’i Cravalho) is the young daughter of the chief of her island and has responsibilities that cannot be ignored, namely, taking care of her people. That doesn’t stop Moana from dreaming of leaving her home island and adventuring across the oceans. When it becomes clear that her island is in danger, Moana sets across the ocean with her chicken best friend, Heihei (Alan Tudyk), to find the demi-god Maui (Dwayne “The Rock” Johnson) and help him restore the heart to Te Fiti, the goddess who created life and the islands that Moana lives on.

“Moana” not only shows us a beautifully flawed heroine, but gives people laughs and moments that could warm the hearts of anyone. ”

Moana herself is a wonderful, strong female character. She is smart, and loving, and passionate, and she shows how strong people can be. She is also flawed, she is stubborn and sometimes refuses to listen. It’s time that people are shown a strong woman of color who is shown realistically and with care. The filmmakers obviously put a lot of time and effort into making sure the cultural aspect of Moana was correct and real to the Polynesian people it represented.

Maui, the demigod that Moana finds to help her with saving the world, is big and loud and will make you laugh so hard you will almost fall out of your seat (which, might or might not have actually happened to me). Maui is a demigod who had stolen Te Fiti’s heart, and must put it back.

Maui, at first, refuses to help Moana, and even when he does, he is not the most agreeable person. But, over time, Maui learns humility and how to be a friend. He and Moana form a friendship that obviously runs deep.

The music of “Moana” is a strong point of the movie. With some musicals — especially Disney musicals — the songs do not further the plot, and only stand to be music for the sake of music. The songs in “Moana” have depth, and teach people things that would have been much harder to explain without said music. Not only that, the music is incredibly catchy and fun.

While yes, there is an obligatory sad song — “I Am Moana,” which is sung with incredible vocals and made me shed more than a few tears — a lot of the songs are fun, catchy tunes that you could imagine hearing on the radio. The catchy pop tune “Shiny” sung by the giant crab-monster Tamatoa (Jemaine Clement) is probably the highlight of the soundtrack.

The cinematography and animation were beautiful. As a cinematography nerd, someone who looks for good camerawork in a movie more than a good plot, I have to say if this movie was judged based solely on it’s cinematography, it would be one of the best movies of all time. The shots of the scenery were honestly life-giving. The attention to detail — not just which Moana’s hair, which I could go on about for hours — but with every character.

“Moana” not only shows us a beautifully flawed heroine, but gives people laughs and moments that could warm the hearts of anyone. “Moana” caters to all ages and gives people the opportunity to explore a rich culture without giving stereotypes or preaching false truths (this is not to say you, or I, will know everything about the Polynesian culture, I encourage you to look into this vast and rich culture).

“Moana” is deserving of a 9.3 out of 10 rating, which I still think is undershooting a bit.

Michaela Kinnear is a veteran member of the Raider Times staff.