Actress talks with Watertown students about her role in the "The Color Purple" -- and sings a little, too 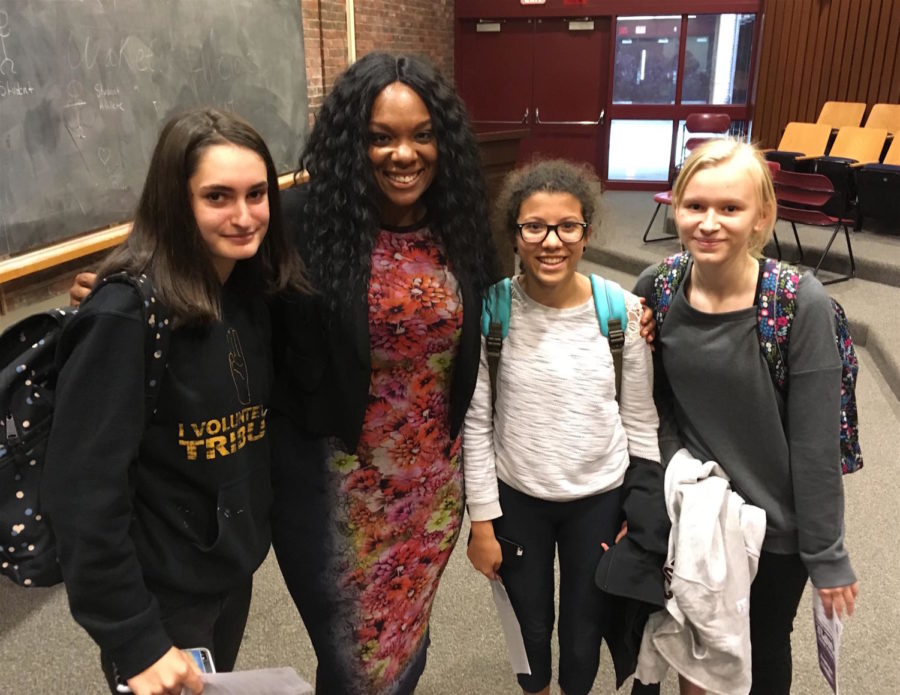 Broadway performer Carrie Compere (second from left), who plays the role of Sofia in the national touring production of "The Color Purple," poses with students during a visit to Watertown High School on Oct. 23, 2017.

Carrie Compere will soon be playing on the Boch Center stage playing Sofia in the Tony Award-winning revival of “The Color Purple.” Last month, she stopped by Watertown High to talk with students and answer questions about the show, her path to Broadway, and her role in “The Lightning Thief”.

She even sang a little something, too.

Q: I’m wondering with “The Color Purple” and “The Lightning Thief” that have both been a book and a movie, they are stories that have been presented before, so how do you bring new life to it?

A: When we closed”The Color Purple”on Broadway, I was going right into “Lightning Thief” which was amazing for me. I played Sally, who was Percy Jackson’s mom .. and I played several different characters [Going from one to the other] wasn’t really hard because both women have actually have a lot of depth. As an actor, I think you just have to tap into what’s the story. As an actor I think you need to figure out who your character is. Who is this person and what do you want people to take away from their story. So, for me, it’s never difficult finding those places.

What’s the more challenging part is making sure I’m not “playing” it. I have to “be” that. … When I get up as Sofia every night I’m not bringing on the fact that I have a husband and two children at home. When you first see Sofia on stage she’s a teenager and she’s pregnant with babies and she’s in love with her boyfriend, Harpo. And I have to live in the truth of that moment.

Q: Do you ever struggle with your character?

A: Yeah, that’s where the struggle is. There’s this one scene for Sofia she ’s gotten beaten up by a cop — you don’t see it, but it plays out in a very special way onstage — and she can’t talk. She can only see out of one of her eyes. And in that moment I have to live in that place.

It is a very deep and emotional place to go to. But as an actor I have a responsibility, not only to tell Sofia’s story, but .. I take it on to represent the many women — and men, too — who have suffered in silence who have been beaten up and couldn’t say anything about it. … So in that moment, I’m not Carrie with a husband and my two kids and my son off to college,  I’m representing this life that has been beaten down and can’t say anything. In every single performance, I have to make that choice to live that moment out truthfully.

Q: When a performance is done, do the characters linger with you?

A: Sometimes it’s easier … but with Sofia, I carry her around a little bit, especially after the show’s over and you’re meeting people. There will be the times especially when the show’s over and you’re meeting people back stage and they are telling you how your performance has in some way changed them or transformed them. That’s goes with you. And I don’t think I’d ever want that to be any different. … It keeps me grounded..

Q: How did you start off and what did you have to do to  become so successful?

A: Well I don’t know if I’m successful yet! [laughs] I was going to be a lawyer. I had no intention of getting into this business at all … I actually got pregnant and married at a very young age. So life just happened for me. I didn’t really have a choice other than to go to work. I didn’t finish college … I had to work. My husband and I were extremely young. … So I was a worker bee. I was out there working in offices, I worked at a dental place. I was putting dentures in people’s mouths …

[We moved to Tulsa, Okla.] I started to get involved in  community theater out there. I started small. I said, “I kinda want to get on stage and do a little something.” … Then my husband came home one day and said, “You need to go to New York and let’s see what happens.” It was random. It was out of the blue. It wasn’t even on my radar at all. … I auditioned [for everything], 6 o’clock in the morning, standing in lines for four hours. Crazy time. Crazy, crazy time. But I was persistent, I wanted it so badly. I wanted to see what would happen.

Eventually I got a manager and an agent and a manager, and I got my first big gig with “Shrek: The Musical” I was on the road for 14 months [as the dragon]. I knew what I got back to New York, I was going to book EVERYTHING, they are going to want me, they are going to be calling — and crickets. Crickets for a very, very, very long time. And a I had to get back on the line. I was back in the grind auditioning again.

I think the formula, if there is one, for success or the way to success is one, be passionate about what you are doing. You got to love it. And second of all, that passion will be the catalyst to you sticking in it when everything else is falling apart. I think in the business you really have to ride until the wheels fall off if you want to see any measure of success.

Q: What advice would you have for people who want to get into this business?

A: Learn as much as you possible can. Whatever your strengths are, really, really educate yourself. Take classes, go to workshops, get a vocal coach. take dance classes, get an acting coach. I didn’t graduate college for this, but I was in every workshop I could possibly get into …

Soak in as much as you can, and be around people who are doing what you want to do. If you want to get into acting and there’s theater here at the school, get involved. If there’s a community theater around here, get involved. … Be around the people and get in the environment of the people that are doing what you want to do. My pastor always says, “If you are the smartest person in the room, you’re in the wrong room.” You should always be learning from somebody.

(“The Color Purple” will be at the Shubert Theatre / Boch Center in Boston from Nov. 21 to Dec. 3. For information or to buy tickets, go to http://www.bochcenter.org/buy/show-listing/the-color-purple.)