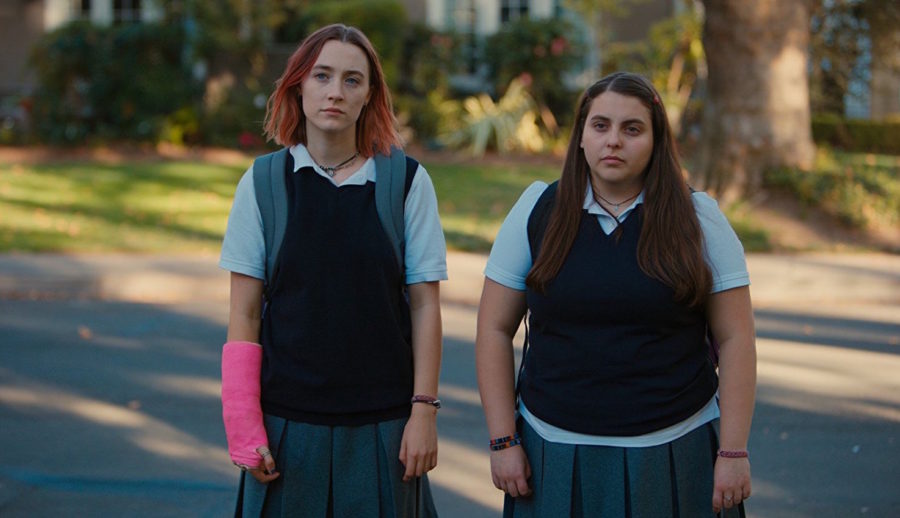 “Lady Bird” is a formulaic, well-crafted screenplay, a recipe made up of typical and commonly found ingredients: teen angst, rebellion, escapism, friendship, high school, and elements of the Bildungsroman literary genre.

Despite the clichés implied with such classic and almost predictable elements, “Lady Bird” proves to be engaging, riveting, and emotionally charged, making up for its so-called faults in plot.

Audiences first meet Christine as she enters her senior year at a Catholic high school; the pristine uniforms, class divisions, and pleasant surrounding neighborhoods each emphasize Christine’s disdain and utter resentment toward a cookie-cutter suburban lifestyle. Indeed, she does not fit the mold; Christine comes from what seems to be a lower-middle-class family, has pink-tinted hair, and insists on calling herself Lady Bird in a desperate attempt to solidify her own individuality and differentiate herself from her peers.

Throughout her senior year, her relationship with her mother and best friend declines rapidly, and Christine ultimately finds herself alone excluding the few insincere friendships she clings to in order to keep herself afloat. As the question of college approaches, Christine wants to be nowhere near her current place of residence, Sacramento; she dreams of attending a liberal arts school in the Northeast, an “East Coast school.”

Much to the surprise and distress of her mother, Christine does end up in New York City, attending a liberal arts school. But things are not as happy as Christine had hoped they’d be: her relationship with her mother is in tatters, she is completely separated from her family, and she eventually lands herself in the hospital for alcohol poisoning after drinking too much and experiencing an extremely awkward encounter with one of her new classmates.

Overall, the film’s themes of teen angst and suburbia provide an excellent commentary on American class divisions, social pressure in adolescents, and the film itself majorly demonstrates that the grass is always greener on the other side.