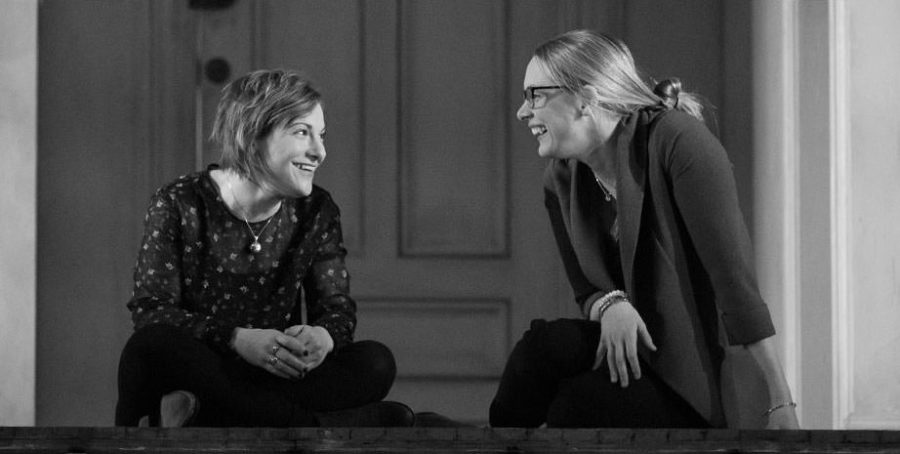 The national touring production of “The Humans” — which will be at Boston’s Shubert Theatre through March 25, 2018 — includes (from left) Daisy Eagan and Therese Plaehn.

“The Humans” written by Stephen Karam and directed by Tony-winning Joe Mantello began its run at the Boch Center Shubert Theatre on March 13. After winning Best Play at the 2016 Tony Awards, it comes to Boston as part of its first national tour.

The play followed the Blake family, whose two children are all grown up and independent, in real time during its Thanksgiving dinner. One ancient Irish prayer, some uneaten dessert, and a blackout later, the entire theater broke into applause. So powerful was this short, sharp play that it earned a standing ovation from its uproarious and largely teary-eyed audience.

I promise you that “The Humans” will offer you something you’ll carry with you long after you leave the theater. I can make you that promise because at 16, I left the theater promising myself to respond to my mom’s texts more often. I can assure you this because three seats across from me, a middle-aged woman sobbed as the play came to an end, and because, after the show, the women’s bathroom was filled with mutterings of “He reminded me of my father” and “Let’s talk about that ending!”

Though never explicit, the play’s heavy topics may fly over the heads of younger audience members, so the it’s best suited for teenage audiences and older.

There are no action scenes, no shocking twists, no dramatic light cues — just one, crappy New York apartment”

Intimate and sincere, “The Humans” takes a simple set and understated premise to tackle the most extravagant of feats: It asks you to evaluate your life and yourself. There are no action scenes, no shocking twists, no dramatic light cues. No heroes, no villains, no fancy sets — just one, crappy New York apartment.

This earnest and unpretentious play doesn’t need any such frills to remain compelling; it’s consistently gripping because it draws its audience deep into the Blake family. It’s complex in its simplicity, offering six vastly differing characters and one middle-class family that’s simultaneously dysfunctional and enduring.

The play’s Thanksgiving dinner premise proves instantly recognizable, complete with a generous dose of uncomfortable laughs, unwanted maternal sermons, and unfunny jokes (“Your sense of humor is the worst!” was my favorite line, mainly because it’s been tossed around verbatim at every family reunion I’ve ever known). It’s this easy realism that allows “The Humans” to feel natural, even while it probes at many a weighty issue. It unpacks, in a play about a financially struggling family, the “Depression is for rich people” stigma surrounding mental health. It highlights the ideological disagreements within the family — religion, marriage, career pathways — and somberly depicts aging and illness.

The Humans” touched me, made me smile, or made me profoundly sad. You’re better off, however, seeing this heartfelt play yourself”

“The Humans” grapples with all these complex issues at once, yet at no point does it lose its sincere tone. Rather, it paints a picture of a family and the issues that plague it. You watch the Blake family go through so many ups and downs that regardless of which note the play ends on — an uncertain one left to the audience’s interpretation — it tells so realistic a story that it’s clear it’s not an ending at all.

There’s a promise in the air that the Blakes will continue on to have 10 more happy endings and 10 more unhappy ones. This play chooses not to tell you one story, but to show you one family. In doing so, it encompasses all the millions of stories they have experienced and will experience together.

Amidst the teasing and one-liners you’ll watch this family scream at each other one moment and and whisper sweet support the next. Realistically nuanced, “The Humans” doesn’t deign to simplify any of its six characters. It shows you each of their flaws, their dreams, their failures, their personal tragedies. And it’ll do so with such artfulness that they’ll stop feeling like characters and start feeling like real people.

Somehow, in just 99 minutes, the play manages also to fit in a heart-to-heart between each of the possible character pair and will highlight every beautiful and broken relationship among the six characters.

The actors embody these characters beautifully. Their ability to make a fictional Thanksgiving dinner enjoyable to watch, when real Thanksgiving dinners can be so difficult to get through, is a testament to their acting. Combined with the acting, the easy dialogue creates the impression that you’re not watching a performance, but rather a series of real conversations. At any given point, nearly all, if not all, characters are on stage, and watching them fumble around one small New York brownstone only heightens the familiarity factor.

I could write another thousand words about each of the ways “The Humans” touched me, made me smile, or made me profoundly sad. You’re better off, however, seeing this heartfelt play yourself.

(“The Humans” is at Shubert Theatre, 265 Tremont St., Boston, from March 13-25. Some scenes contain mature content that may not be appropriate for students younger than in high school. For information or tickets, go to http://www.bochcenter.org/thehumans.)