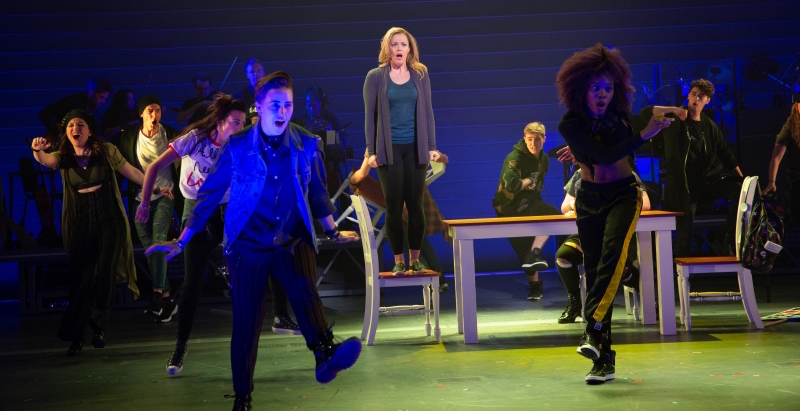 The three words “Jagged Little Pill” may elicit different responses and emotions from those who hear them.

Alanis Morissette fans will immediately recognize these words from the music icon’s album of the same name. Broadway aficionados and lovers of theater will automatically think of the title of a new musical. And yet the majority of people who hear these words will be left in utter confusion.

What on earth is a Jagged Little Pill?

In fact, Jagged Little Pill refers both to Morissette’s album and a new musical; the two are blended together in an artistic vision that tells the story of a family in modern-day society through the soundtrack of an award-winning album.

Last week, I was fortunate enough to speak with two of the talented cast members about the making of a new production at American Repertory Theater in Cambridge. Yeman Brown and Kelsey Orem are the show’s two swings — perhaps the most integral positions that an actor can have in a production. A swing’s job is to learn the parts of several characters in the show, and to be prepared to go on stage at a moment’s notice.

The job of a swing is often forgotten or overlooked, yet it is infinitely hard to prepare for this part; as part of the interview, Yeman and Kelsey shed some light upon the difficulty of learning five parts in the exact same time.

Both swings emphasized the quote “Hold on tightly, let go lightly,” a catchy phrase they have been learning since the very beginning of the rehearsal process.

They spoke about the importance of being constantly alert and aware of the changes being made in the show, especially during tech week — the week leading up to the show’s first day of previews May 5. It is imperative that the actors “hold on tightly” to the recommendations of directors and the new changes, but also that they “let go lightly” of scenes that are cut or songs that are altered.

With a new show that is completely “built from the ground up,” it is likely that changes in the script will be made every single day of rehearsal to ensure the show’s success once it is finally ready for the world to see. Despite these constant changes, the actors are more than thrilled to keep up with the quick pace of a new creation.

Kelsey described the whole process of creating a show as “amazing and beautiful,” and stated that “Jagged Little Pill” truly “has its finger on the pulse” of today’s world.

This image of a pulse stuck with me after the interview because it is reminiscent of a beating heart, which is, for me, the best way to describe a new musical. A musical is originally comprised of words and songs on a page, yet it is given life when the actors, set, lights, sound, and technical elements are added to the show; then, the words that were once an abstract idea in someone’s brain become a tangible reflection of our world.

I am beyond excited to see this show, and I will be extremely mindful of the effort put in by all the actors, crew, and creative directors. As I learned from Yeman and Kelsey, “Jagged Little Pill” is so much more than just a musical; it is the product of months of hard work, creativity, and overflowing passion for the magic of theater.

As audience members watch the show, may they, too, remember to “hold on tightly” — in this case, to the messages and the lessons conveyed about life in our modern, ever-changing society.</div>

(For information about “Jagged Little Pill” or to buy tickets, go to https://americanrepertorytheater.org/.)