“Jagged Little Pill” an alternative take on a “perfect” family

The chorus has a prominent role in "Jagged Little Pill" at the American Repertory Theater.

Are you interested in alternative rock music? How about musical theatre? Or, better yet, both?

“Jagged Little Pill” is the final mainstage production for the American Repertory Theater’s 2017/2018 season. The show is based off Alanis Morissette’s Grammy Award-winning album of the same name, and features 22 songs by Morissette, including popular favorites such as “Ironic” and “Hand in My Pocket.” The A.R.T. developed and produced the musical’s world premiere run, which goes until July 15. 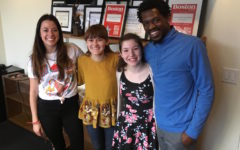 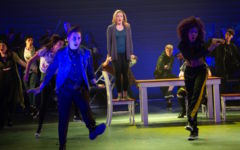 The original fictional story centers around the Healys — a “perfect” family who each has their own struggles. Mary Jane Healy is a mother struggling to make her life seem all put together and ignoring the traumas of her past … all while she gains addiction to opioids. Steve Healy is a father/husband who works too much and doesn’t know how to handle the lack of intimacy in his marriage. Frankie Healy is a teen activist, who struggles with her adoptive mother not seeming to be understanding of her race or sexuality. Nick Healy is planning on going to a top college when he’s faced with moral decisions that could drastically impact his future.

Add in the subjects of rape and rape culture part way through Act 1, and no one can accuse “Jagged Little Pill” of trying to stay away from tough topics. But the musical touches on the topics in a respectful way. The cast met with a rape crisis center as part of their work on the show. Information on places to get help and healing from sexual assault, rape, and addiction is listed in the show program, as well.

The show itself works to portray the complexities of the topics and how they affect everyone involved. Importantly, they don’t villainize any group of people. The musical also tends to stay away from politics.

Of course, there are still some people who aren’t fans. During a talkback after a matinee performance on June 6, 2018, Celia Gooding (who plays Frankie) shared how she had overheard some audience members referring to the show as a “PC play” (PC = politically correct).

Part of the cast went on to discuss how they think the show would be received in different areas from the liberal Cambridge, Mass. Sean Allan Krill, the actor who plays Steve, felt that it is important for a variety of people to have the chance to be impacted by the show. As he put it: “They might not like it, but they need to see it.

The cast had powerful vocals and gave real emotion to their characters. My personal favorite was the character of Jo, the genderqueer best friend of Frankie. Jo is played by Lauren Patten, who plays up the humorous spark in the character and moved the audience to their feet in applause during her rendition of “You Oughta Know”. Patten has previously played Medium Allison in the musical “Fun Home” on Broadway.

The people behind the creation of “Jagged Little Pill” are also rather experienced. The music is by Morissette and Glen Ballard — who were co-writers on the original album from 1995. Morissette is a singer, songwriter, and actress. She’s won seven Grammy Awards. Ballard has written songs with and for a variety of singers, from Shakira to Van Halen to Michael Jackson. He also has past musical experience from being a music co-writer for “Ghost the Musical”.

The book was written by Diablo Cody. She’s known mainly as a screenwriter, having written the scripts for movies such as “Juno” and “Jennifer’s Body,” along with being a creator for the TV show, “The United States of Tara”.

Diane Paulus is the director for the show. She became the artistic director for A.R.T. in 2008. She’s directed shows such as “Finding Neverland” and “Waitress”. She also was a co-creator of “The Donkey Show.”

(If you’re interested in seeing the production, it is being performed at the American Repertory Theater from May 5 to July 15, 2018. Tickets can be bought at https://americanrepertorytheater.org/shows-events/jagged-little-pill/.)

Kirsten Aucoin is a member of the Raider Times staff.