“Hamnet” doesn’t need the “L” to make itself known 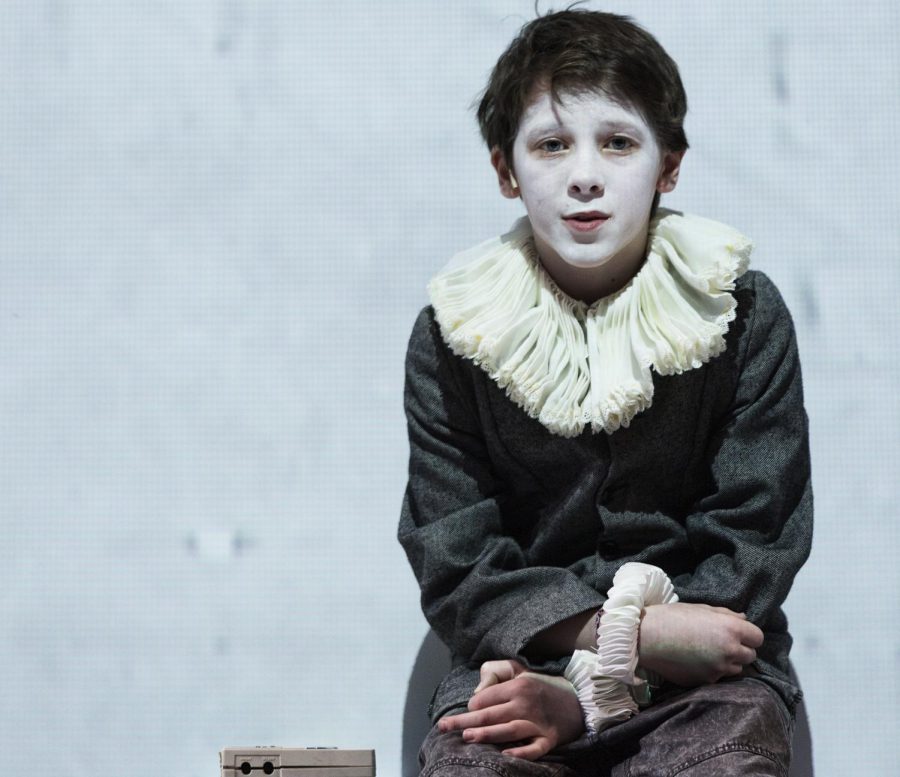 Ollie West as Hamnet, the 11-year-old son of William Shakespeare.

When people hear or see the word “Hamnet,” their minds instantly go to “Hamlet,” William Shakespeare’s famous play that everyone reads at some point during their education. Many don’t associate the name with Shakespeare’s mysterious son, because many don’t know about him.

Hamnet was Shakespeare’s only child, who sadly died at the young age of 11 from an unknown illness. After Hamnet’s death, Shakespeare published some of his most upbeat comedies, leaving many to believe that he had a distant relationship with his son and wasn’t very affected by his death; however, with his comedies came his tragedies, containing allusions to his forgotten son.

“Hamnet” at the Emerson Paramount Center through Oct. 7, brings an interesting new story of their father-son relationship to the stage. The show consists of only two characters, Shakespeare and Hamnet. Ollie West plays Hamnet, and leads the audience beautifully through the show, perfectly capturing the naiveness and awkwardness of an 11-year-old.

West’s performance is not only impressive because of his heartbreaking presentation of the lost boy searching for approval and love from his father, but also because of his maturity and power he holds on stage for such a young actor. (Aran Murphy will take over the role beginning Oct. 3.)

Playing opposite West is Bush Moukarzel — who is also one of the writers and directors of the show — as Shakespeare. Moukarzel portrays Shakespeare as distant, yet caring for his only son, taking his place as the father that he never was for the boy.

In addition to the superb acting, the staging and use of lighting and sound create an eerie tone, keeping the audience on its toes as to where the story was going to go. A screen was set in the back of the stage, constantly filming and projecting the audience, and was used in the show to introduce the characters, with ghost-like images of them floating down the aisles, only for the lights to turn on and the actor to suddenly appear on stage. The screens were also used as a metaphor for the different worlds Shakespeare and Hamnet live in, with Hamnet being dead and Shakespeare being alive, by projecting a recorded image of the actors on the screen, as if they were a ghost on the stage that the audience couldn’t see. This effect also made it so neither actor was on stage at the same time.

The play, performed in the United States for the first time by Ireland’s Dead Centre theater, has its adult moments as there is a brief scene of nudity that may not be fitting for younger viewers.

The Emerson Paramount Center’s “Hamnet” brings an interesting new look into the story of the mysterious son of Shakespeare. The breathtaking acting, interesting use of lights and sound, and the intriguing story makes “Hamnet” a must-see for anyone interested in learning more about the 11-year-old boy who inspired a literary genius.

(“Hamnet” is playing at Emerson Paramount Center through Oct. 7, 2018. For tickets or information, go to https://artsemerson.org.)