“The Hate U Give” is a must-see 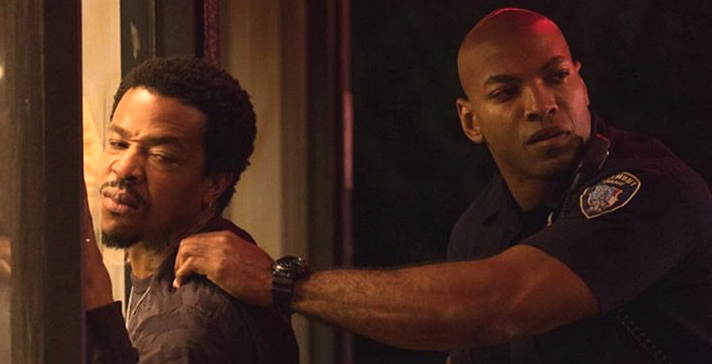 Russell Hornsby (left) in "The Hate U Give".

T.H.U.G.L.I.F.E — The Hate U Give Little Infants (bleeps) Everyone. This is the saying (originated from a Tupac song) echoed throughout the 2018 film, “The Hate U Give.”

Whether or not this story is one that you can relate to, it is an important one to see. This movie sheds an inside perspective on one of the most controversial topics in America today. This is more than a coming-of-age story about accepting your background, but a political statement and an important message.

This movie follows the internal struggle of Starr Carter, an African-American 16-year-old, as she bounces between her life at school and her life at home. Starr lives in the projects due to her father’s request, but attends a predominantly white and private high school upon her mother’s request. On an unfortunate night after a party, she witnesses her childhood friend, Khalil, get shot by a white police officer. This sparks a large debate and rising tensions among her two worlds, eventually ending in their collision.

This dual perspective sheds an important light on how police brutality affects everyone. The movie gives a very intimate insight on the aftermath of a racially motivated shooting, and how it affects the community surrounding it. “The Hate U Give” touches base on many of the societal pressures African-Americans experience, from their reputation in media to their relationship with the justice system in America.

The movie signifies the difference of Starr’s two worlds through a creative use of lighting and filter. When Starr appears with her family or neighborhood, a warm (almost red) tint is shown, while when Starr is with her school or boyfriend, a cold (almost blue) tint appears. These two colors also appear, together, when police are around due to the coloring of police sirens. It is clear that the lighting may have been intentional in order to show Starr’s two lives merging into one.

On top of creative lighting, the acting in the film is phenomenal within this large cast, especially by the youngest members. Despite the diversity in age, the maturity does not waver from actor to actor. Each actor delivers a unique and personal presence to the movie and creates a beautiful film that delivers real pain to the audience.