“The Hate U Give” will show you exactly why #blacklivesmatter 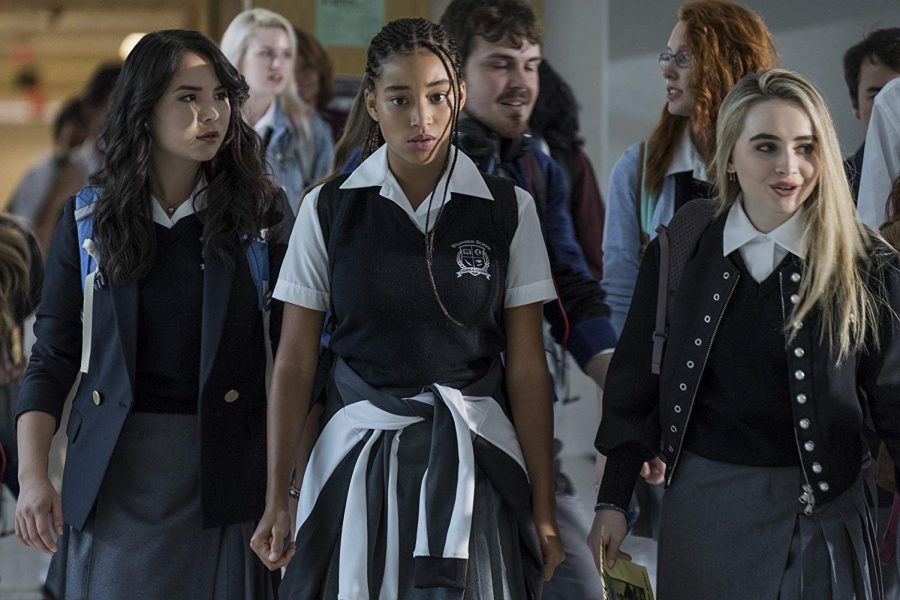 Megan Lawless (left), Amandla Stenberg (center), and Sabrina Carpenter in "The Hate U Give."

“The Hate U Give” is perhaps one of the most heart-wrenching, yet realistic and important pieces of social commentary in recent memory. It paints and demonstrates a vivid picture of the black experience in the United States, particularly the ugly side of it. It shines a light on the all too familiar and all too painful police brutality that continues to plague black communities in the United States, and does so with a stunning level of realism, emotion, imagery, and cold truth.

Based on the 2017 novel by Angie Thomas, the story follows a 16-year-old black teenager named Starr Carter (Amandla Stenberg), and Starr is constantly torn between two worlds.

This movie is an experience and it’s a difficult one at that. ”

She lives in Garden Heights, a poor, gang-infested, black neighborhood, home to her family, culture, and entire life. Here, she is Starr Version 1. But every morning, she wakes up to go to school and slides on a Williamson Prep school uniform, a school located in what seems like an entirely different world.

Williamson is the exact opposite of Garden Heights in almost every single way. Williamson is an upper-middle class/wealthy district, Williamson is safe, but most importantly, Williamson is white. Her friends are here, her education is here, and her boyfriend is here. Williamson, is where she becomes Starr Version 2.

For most of her life, Starr is able to keep these two worlds separate. Starr Version 1 and Starr Version 2 never cross into each other’s territory and she makes sure that her life in Williamson and her life in Garden Heights never overlap.

This all changes one fateful night when she witnesses her best friend Khalil Harris (Algee Smith), an unarmed black teenager, get shot and killed by a white police officer after being pulled over for a traffic violation. Starr’s delicate balance of these two worlds is shattered as she faces pressure on all sides, from both communities, and she is faced with the choice of remaining silent, protecting herself and her identity, or speaking up and fighting for justice for Khalil in a final act of friendship.

Though my feelings on Amandla Stenberg are mixed at best, she was absolutely phenomenal in this movie. Her display of emotion, as well as her complete absorption of Starr’s personality and character was beautifully done. Besides Amandla, every actor in this movie completely masters their role and is an irreplaceable part of the movie.

As a young, black American, being just a year older than Starr and Khalil, I felt the fear they felt when the officer pulled them over”

In addition to the acting, the cinematography of this movie was also gorgeous. The way light and color were used to demonstrate a difference between the poor and the affluent, as well as to signify the mood change, was very well done and clever. In some shots, you are forced to sit back and admire the aesthetics of the film and you’ll begin to see how the coloration of shots in reference to the actors’ expressions continuously adds to the somber mood of the movie.

I’ve been excited to see “The Hate U Give” since it was announced and, though I had an idea of what was to come, nothing could have prepared me for the pure anguish that I was going to feel for these characters.

As a young, black American, being just a year older than Starr and Khalil, I felt the fear they felt when the officer pulled them over and I understood the mourning and anger after Khalil’s death. I connected with these characters on a personal level because their situation is not uncommon among black youth and is something we all pray never happens to us.

I specifically connected with Starr trying to find her identity in a predominantly white institution and the constant tug of war between loving her blackness and trying to change the perception of her blackness in society to be more palatable. For me, this movie was more than just a movie. It serves as mouthpiece for the black American community and displays every horrific story of police brutality as well as the hardships of being black in the United States.

It says everything we’ve ever wanted to say.

But this movie is not just for black people, nor is it just for Americans. It is for every and any person, regardless of race, who is willing to see and experience what is a very real and prominent social issue in our time. When watching this movie you will feel uncomfortable and that’s OK. Issues like these are not supposed to make you comfortable.

When watching this movie, you will feel heartbroken, you may even cry like some in the theater did. That’s OK, too. This movie is an experience and it’s a difficult one at that. Every wave of emotion that you feel is valid and is all a part of the greater purpose of the movie, which is to raise awareness, and understanding, as well as to create a dialogue around racism and police brutality in the United States.

“The Hate U Give” is most definitely one of the most important movies that’s come out in the past few years. It’s bringing an issue to light that for too long has been swept under the rug. I highly recommend it and I strongly urge everyone to see it at least once.

Even if you may disagree with it’s premise, it can offer you a completely new perspective that you may have not been aware of. A movie like this is meant to educate us all, so we can step into the future together, as a united country.

Olivia Beauvoir Haggerty is a member of the Raider Times staff.