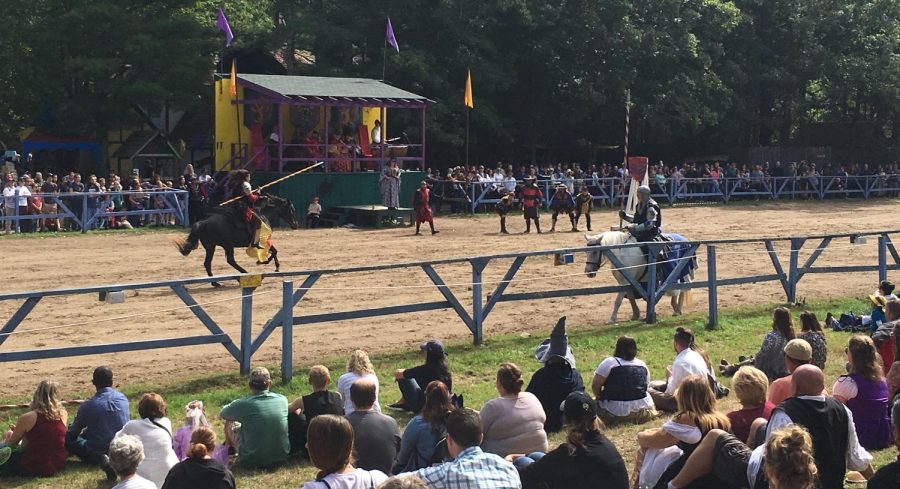 The jousting field is always full of excitement at King Richard's Faire in Carver, Mass.

Walking through the gates of King Richard’s Faire, we entered a new realm. No longer were we in the 21st century; we were transported back in time.

We were awestruck to say the least. Looking around, every person, employee, and guest was dressed for the occasion. A T-shirt and jeans suddenly seemed out of place standing alongside people dressed in cloaks, armor, and peasant dresses.

While the costumes played a role in the ambiance of the faire, it would not be complete without a vast stretch of cottage-like open buildings for guests to explore. Built in the heart of nature in Carver, Mass., trees sheltered its foundation. We almost expected gnomes to pop out from behind a stump somewhere. The architecture of each building did not look like a set piece, but rather an amazing piece of art with the detailing in signs and efforts to make their appearance fit the era of medieval times.

Walking down the road, we felt as though we were warmly welcomed into a kingdom as a subject of the regal authorities, but of the fantasy world of magic as well.

The most exciting attractions for people of all ages were the jousting battles. In the main field, authentic-looking knights in shining armor lined up on their horses, each wielding an impressive lance. The first challenge included spearing through a target and knocking over obstacles. Soon, the knights moved on to the real thing. They galloped at full speed toward each other, stabbing into the shield of their opponents. This went on until one of the knights was ejected from their horse.

The adrenaline rush that the knights must have felt was passed on to the crowd. There is something incredibly unique about watching jousting. It is unlike anything that can be seen in our day-to-day lives. There is excitement in the violence with a simultaneous feeling of whimsicality as the audience is aware that the show is meant to be a depiction of medieval times. It is truly something different that people must experience for themselves in the alternate reality that is King Richard’s Faire.

Everywhere we looked, we saw more and more. There were a substantial amount of shops and services that gave visitors plenty to see and do. From psychic readings to knife throwing, there was entertainment for all kinds of people. We stopped by cloak and clothing shops to marvel at the apparel that seemed so different from what we were used to. In these stores, anything you bought would make you look like you came straight from the 10th century.

We admired jewelry and necklaces with fantastic charms that seemed to hold mystical properties. We watched musical performances with talented groups of instrument-playing minstrels. We were enchanted by fire throwers and weapons specialized for torture. We were never bored, always looking to the next building to discover something new. Adults and kids alike can have a good experience and the staff are very receptive to any kind of visitor. One first-time visitor in our group felt very comfortable but, at the same time, fascinated by the new world she was exposed to.

It wasn’t long before our eyes were caught on the countless food kiosks along our way. Unable to stand the hunger pangs any longer, we gave in. In order to buy food, we had to go get food tickets at a booth nearby. Counting up the number we needed, we gazed along the boards of food. The options were vast, with options for any kind of eater. Fit for vegetarians, children, adults alike, all would be attracted to the feast they would soon consume.

The most popular dish however is exclusively for the meat eaters; the giant turkey leg. Smothered in a sweet sauce, this giant turkey leg takes the cake for an enticing option. A dish we ate was one on the simpler side, a vegetable stew, which, although plain, was quite delicious. After consuming every last bite, there was still some remaining room for dessert.

Our sweet teeth were overwhelmed by the unicorn donuts, soft serve ice cream, apple crisp, and many other sweets that were on display. The ice cream we tried was perfect for dipping french fries into and finished off our day quite nicely.

King Richard’s Faire welcomed us in with open arms. We were invited into a new world of magic and history. We got to experience the world in a way that no longer exists. Although some people are veterans of the Faire and commit themselves to going every year, the casual visitor is more than welcome.

For a day, we got to imagine ourselves as people from medieval times and see the exciting things that they could see. We got to immerse ourselves into an eccentric lifestyle and embrace the unusual things that we came across.

King Richard’s Faire is the place to celebrate the inner history buff within all of us and escape the modern world for one that is a little older and a little more rugged. It also helped us establish a base and when we came across other people, we knew that they were having fun, too. Children were laughing and smiling and generally just having a lot of fun.