Amber Run leaves its mark on Boston during first US tour

Student journalists' anxious afternoon results in concert for the ages 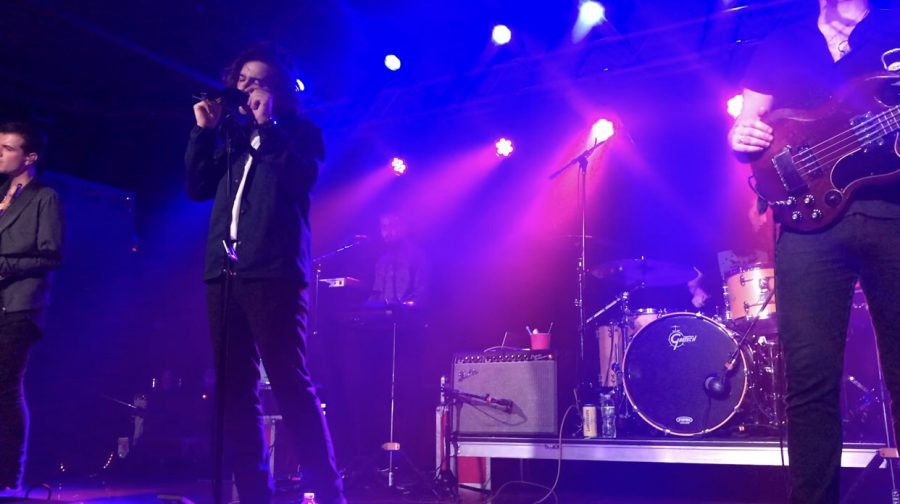 What could’ve ended very terribly resulted in one of the most memorable journalism adventures I’ve embarked on in my three years of writing.

Getting the chance to see Amber Run, an indie rock UK based band on their first US tour at Brighton Music Hall, at no cost with my best friend seemed like a blast. But it proved to be difficult because, although we had arranged for press credentials through the band, there was an 18-plus age restriction at the venue.

Although no plans were certain, we still marked our calendars for Sunday, Dec. 9, as it was too good of an opportunity to pass up. After days of waiting on updates, we learned that we needed a chaperone that was at least 18 years old to accompany us. This information was provided just hours before the show, so the rush and panic of finding someone was setting in. After getting someone to give some sort of confirmation that they would be our chaperone, we headed out — only to be bailed on.

The rest of the car ride to the venue was spent texting everyone we know in hopes that someone was willing to drive and meet us in Boston. Hope was lost very quickly and nobody was willing to help or make the drive over.

We arrived to the Brighton Music Hall 2.5 hours before doors opened in attempt to figure out how to get in without a chaperone. Desperation was so severe that I turned to asking complete strangers for help. Two girls waiting in line for the show were the only viable option. It was either them or the only other person insane enough to wait until 7 p.m. in the freezing cold for doors to open, a grown man clad in a dark jacket standing off to the side alone. For the sake of not getting murdered, I opted for the two girls.

With all the efforts I was making, there was still no luck as they flat out refused. At this point, we could hear the band finishing up its sound check. It was around 5:30 p.m. and no progress had been made on the chaperone front, so I took my chances and walked in with whatever fake journalist confidence I could muster.

Asking in the nicest way possible that I speak to Doug, the tour manager who we had been emailing back and forth with, I was surprised that the employees took me seriously enough to go grab him. This was a major confidence booster and I was set on getting into the show despite the circumstances.

While introducing ourselves, I did not bring up the chaperone situation for fear that we’d get kicked out. As a cover, I said we showed up early to make sure everything was in place. After he assured us that we were on the guest list, we headed outside to figure out a new game plan.

I eventually accepted that I would have to come clean about not having someone to get us in to avoid embarrassment at the door, and, for once that night, something surprisingly worked out in my favor.

Texting Doug and telling him the truth was the smartest decision I could’ve made. He agreed to come out at 7 p.m. and bring us in himself. With this news, our night had been made before the concert even started. Had it not been for Doug being a kind soul and taking time out of his busy day to help us, we wouldn’t of had a chance of getting into the show.

One hour after doors opened, Ellevator, the opening act, gave an amazing performance that riled up the crowd. Frontwoman Nabi Sue Bersche not only stunned us with her vocals (and her green suit which was an absolute power move) but also with the energy her and the rest of the members, Elliot, Tyler, and Mike emitted. Throughout the set they maintained a connection with the audience despite the limited amount of time they had to perform.

When it was time for them to leave the stage, Nabi jumped over the barricade separating the stage and the floor and ran through the crowd, while asking people to join her at the merchandise booth. Although I personally did not listen to them before seeing them live, it was a breath of fresh air to see a band with such talent be so genuine.

Another hour of what felt like agonizing waiting passed by and Amber Run finally hit the stage with their latest song, “Carousel.” The sound of guitars and drums ripped through Brighton Music Hall as Joshua (Joe) Keogh blessed us all with his vocals. Even though it was their first US tour, he seemed extremely comfortable with facing a new crowd and made being talented look effortless, especially when performing difficult songs like “Amen.”

With the floor shaking and the crowd screaming, they moved onto the next song, “Spark.” Hearing these songs online is one thing, but hearing them live is an entirely different experience. The group clearly knows how to get a crowd excited as they had everyone shouting the chorus to popular songs including “Carousel”, “Spark”, “Noah”, and “I Found”.  Hearing “Spark” and “No Answers” were highlights as they are two of my favorite songs the group has released.

“Haze” is also a favorite and one of the more memorable songs they performed, but it was slower compared with the others on the setlist and it settled things down, creating an entirely new atmosphere. It wasn’t a song you could sing loudly to, unlike the rest and that made it stand out. But what really made it memorable were the two girls behind us who had no shame in screaming out the lyrics upon the silence of the crowd listening.

Through keyboard player Henry Wyeth, I was in awe not only because of the skillful playing but also because of the astonishing harmonies he contributed toward the songs. He played a key component in this concert, but the awkward placement of the members was a shame since we couldn’t see him from where we were standing because he was behind the three guitarists.

Tom Sperring, the bassist responsible for “bringing the thunder” seemed to be very into the music, and it was apparent that he was feeling it just as much as the crowd was. Being talented on an instrument is one thing, but being able to present yourself as well as he did is another level of talent.

Touring guitarist Michael Blackwell and drummer Glyn Daniels proved dexterity at this concert. Although they aren’t official members of the band, they were a wondrous addition to the show. I have to give them all credit for having a fun time on stage and jumping around without a care in the world, while still selling a marvelous performance. They’re a prime example of a talented group with stage presence and charisma.

Aside from the musical aspect of the show, Joe made lots of conversation and jokes with the crowd between each song, including the brief intermission to celebrate his birthday, which was the next day. All of that maintained the lighthearted feeling that radiated throughout the venue.

After the concert was over, many stuck around the merchandise booth where Nabi was. Eventually, a few of the Amber Run members came out to greet fans, which I took as my chance to talk to Tom. During the brief interaction he said that they were in fact enjoying America, which leaves hope that they’ll return again for another tour.

In the long run, it was a troubling and stressful experience figuring out how to get in but proved to be worth it for the two breathtaking groups we got to see. If they do end up coming back for another North American tour, anyone who gets the chance to see them perform live should.

We can suspect that another tour won’t be coming for a while, so in the meantime, listening to their albums “5AM” and “For a Moment, I Was Lost” is a must.