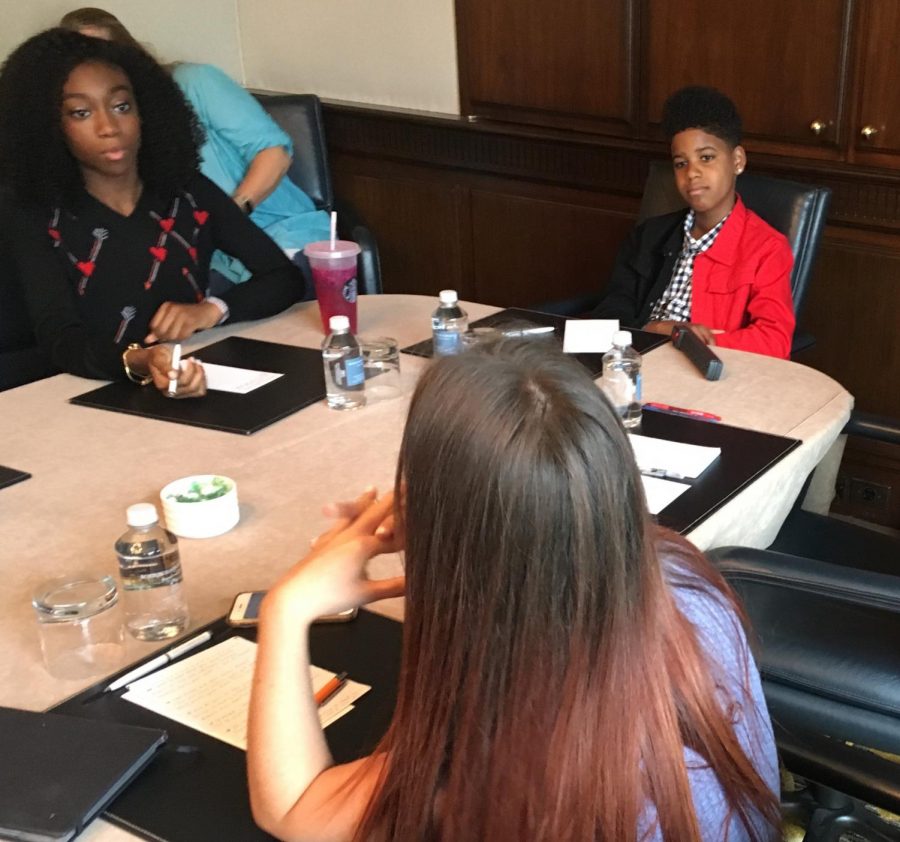 Before the release of Disney’s latest live-action movie adaption “The Lion King,” I was one eight Boston-area journalists who interviewed the two young voice actors, 12-year-old JD McCrary who plays Young Simba, and 14-year-old Shahadi Wright Joseph, who plays Young Nala. Talking with them both felt like just sitting down and talking with friends since they were both so approachable and candid.

Below is a transcript of the roundtable Q & A (Note: Transcript edited for clarity and space.).

Question: When you heard the news that you were being cast as Young Simba and Young Nala in “The Lion King”, how did you and your families react?

I still go to regular school and I have to keep up a perfect GPA because that is how we’re able to get work permits … But I think regular school life is pretty normal.”

Shahadi: My family was with me when we found out that I had gotten the role. We went out to dinner and just had a good time.

Q: On another note: how did your friends react to the news?

Shahadi: Literally, my friends don’t care at all. Like at all.

JD: My biggest friends are my cousins and my brother. There’s four of us: my cousin, my other cousins, my brother, and me.We call ourselves “The Topic”. I don’t know why. And they don’t care. They don’t care at all.

Q: About your school, you said you go to a school where people are “famous”. Do you mind elaborating on that?

Shahadi: Well everybody there goes to auditions, they do a lot of things on Broadway. Y’know it’s like that type of thing. So it’s kind of cool.

It was really awesome to hear my voice for the first time in that movie with that huge audience reacting to everything I said.”

Q: Can you guys talk about the VR headsets you used while making the movie?

JD: Yeah, that was really cool. That was the funnest part of being in “The Lion King”. It was a lot of fun to use. We put on the VR headsets and we could look around. We could see Pride Rock and the savannah. We just saw everything. We saw the watering hole and the elephant graveyard. It all felt real. And it’s all in VR. It was scary looking down cause you were looking down when it’s so high up, but yeah it was really fun!

Q: When did you find out you got the roles? When did the process start for this whole movie?

Shahadi: Yeah, it was like, two years ago. We were very little. We were so young! And we’ve been waiting for this for a long time, so it feels awesome for it to be finally coming out.

Shahadi: I mean, I know both of these projects had amazing directors. Jordan [Peele] and Jon [Favreau], they’re like the best directors I’ve ever had. With these two movies, I’m really glad that I got to showcase my ability as a serious actor before “The Lion King” came out, and I’m really glad I got to work on each project, cause those are some of my favorite genres. I kind of want to explore all different genres in the future.

Q: As far as getting into different mind-sets, how do you compare a horror role to a fun, lively sing role?

Shahadi: I mean, with Disney, I didn’t have to change my personality that much, so that’s easier, and for “Us”, that was the hardest thing I had to do, but it was really fun because it was a challenge and I love challenges. But I think, overall, I had more fun with this movie.

JD: I wasn’t in a scary movie. [Everyone in the room shares a laugh.]

Q: Do you want to be in a scary movie in the future?

Shahadi: I literally got kicked out of the movie theater because I was trying to get tickets to see “Us” with my friends and our parents bought the tickets. We were like, “Can we call our parents? You can talk to them because they have the tickets. Also, I’m in the movie!” They were like, “No, sorry, we’d get in trouble for that type of stuff. We’re going to have to ask you to leave.”

Q: I saw the movie and I thought it was great! It has a lot of messages that we can pull from it today. What do you hope people are going to get out of the film when they see it?

JD: What I’m hoping people get out of this film is that they’re going to love it. Because everyone loves “The Lion King”. It’s a great movie. It’s a priceless classic and they’ve outdone themselves. The graphics look so real. It feels like you’re there. What I hope they get out of it is that they understand the message of the movie and the moral. I hope they just love it.

Shahidi: Exactly. I’ve seen both movies. So it was a totally different experience when I saw the all-new “Lion King”. I cried so much. I laughed a lot more. It was crazy. I hope that families are going to love it. The movie is about family and I hope they have an amazing time watching it.

Q: Can you guys talk about your reaction to  your first time watching the full movie?

JD: It was actually really cool.

Shahidi: He doesn’t think that it was weird.

JD: It wasn’t that weird

Shahidi: It was kind of weird at first, to hear my voice coming out of a lion that looks like an actual lion! Like, it was kind of crazy. I was a little bit shocked and then I was like, “Oh wait, I remember, we did do this.

JD: Y’know, I didn’t think it was weird. It was cool because like “This is me, I’m on the screen right now. That’s my voice!” I was really shocked how it came out. It was really awesome to hear my voice for the first time in that movie with that huge audience reacting to everything I said. It was a dream come true.

Q: Throughout the whole process, your whole “Lion King experience”, do you have a favorite moment? A favorite memory?

Shahadi: There was this room where you could see all of the pictures of the cast and stuff. Like all of the new sketch of how the lions were going to look. That was really awesome. We were very distracted from our [school]work. It was cool.

JD: I’d say my favorite memory was seeing all the animation because there was this whole cubicle and there were all of these people and this was a single cubicle where we could just check it out, walk around, and see all the animations that they were drawing. It was super cool seeing everything going on.

Q: What was it like to work with Beyonce and Donald Glover?

JD: We didn’t work with them.

JD: Wait. Well, we worked with them, but we didn’t get to see them.

JD: We met them though.

JD: And I met Beyonce before she met Beyonce. She always takes the lead on it and says, “Oh, I met her at the premiere.” I met her first. I just wanted to make that clear. That’s the true story. It’s cool working with her though. It was awesome to work with such icons.

Q: So obviously doing voiceover for an animated film is different from working on the stage and screen experience you’ve both had. What was the process for recording the songs? How many takes did it get? What was it like?

I go to a school [in New York] where everybody’s quote-unquote “famous” … Like, my lockermate just won a Tony and we don’t talk about it.”

Shahadi: Well, it was great! We had so much fun recording, “Just Can’t Wait to be King” and I think, in total, we did the song maybe four times?

Shahadi: It was like the quickest and fastest process of recording the music. It was amazing.

Q: Speaking of music, JD, I noticed you’ve done a couple of music videos for Disney. Have you always wanted to be a singer?

Q: How does the education part work when it comes to your careers?

JD: I’m homeschooled. I don’t go to normal school anymore. I went to sixth grade for a semester, just to check it out, lockers and stuff.

Q: What’s next that you guys are working on, that you’re allowed to talk about

JD: I have an EP coming out,after the release of “The Lion King.” I also have another EP that’s out. It’s called “Shine”. All of you in this room, listen to that if you want. It’s totally your choice, but it’s my birthday.

Shahadi: You owe him. It’s his birthday. [Everyone laughs]

JD: I also have two singles out. One’s called “Keep in Touch” and the other’s called “My Name”. It’s not my literal name [everybody laughs], it’s just “My Name”

Shahadi: It’s quote-unquote “My Name” … I have a single out right now, as well. It’s called “Skin I’m In” and it exclusively debuted by Billboard couple days ago, so you guys can go check that out. It’s JD’s birthday, so you do owe him” [Everyone laughs]

Shahadi: No. [Everyone laughs]