There’s a lot of interesting history with Mr. Mastro 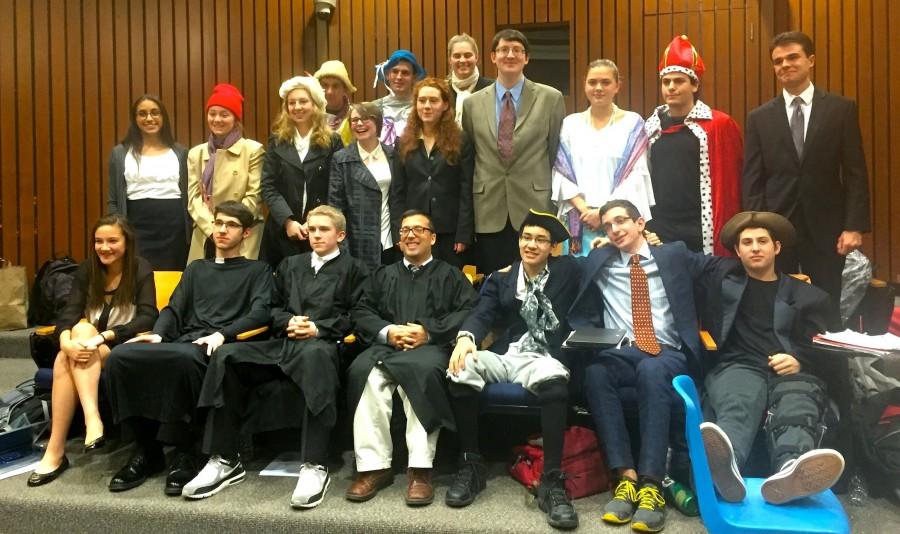 Participants in the annual French Revolution trial put differences aside to pose with Judge Mastro (front row, center) for a group picture in the Watertown High School lecture hall on Jan. 21, 2016.

The first thing you might think about when you think of David Mastro is “Hey, that’s that feisty guy who teaches history.”

While you would be correct about him teaching history at Watertown High (and the feisty part), we have to remember that he is a human being and has neat story to his life becoming a teacher.

Mr. Mastro was born on May 1, 1974, and lived his childhood in a small farm town out of Princeton, N.J. He knew he wanted to be a teacher since ninth grade after helping a friend study, and he taught other students successfully. He was told he had a gift for captivating an audience.

He attended Providence College in Rhode Island, a private Roman Catholic university. He first taught world history at Coyle and Cassidy High School in Taunton, Mass.,in 1996. He taught there for four years, and then came to Watertown High School in 2000.

He taught world history for eight years and has taught US history and AP European history until present. That’s right, Mr. Mastro has been teaching here for 19 years! Really makes you feel old, doesn’t it?

Mr. Mastro has been married for 16 years and has 8-year old twins, Owen and Olivia. The family loves to go to vacation in Hawaii, especially now since they bought a house there last summer. Mr. Mastro tells stories in class about his busy schedule and the fun times he has with his two children.

Mr. Mastro describes himself as “loud and energetic (and a temple of perfection).” He says his goal is to “make class exciting enough for kids to want to come”.

He wants to see his students achieve more toward the goals they choose.

“If they really put their mind to it, students can achieve anything through perseverance and hard work,” he said.

Tobias Magzelci is a member of the Raider Times staff.