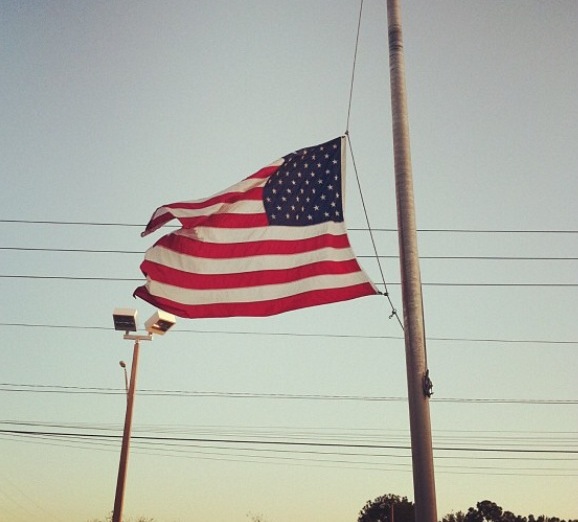 In Florida on April 2013, flags fly at half-staff to show support for Boston after the bombings.

Niko Ohannesian, a junior at Watertown High was on vacation in Florida last April when the Boston Marathon bombings and the shootout in Watertown occurred.

Being in another part of the country while your hometown is being attacked is crazy. Watching the TV and seeing your house in the middle of it is unbelievable.

Niko’s family was in Florida last year a bit before April vacation week. While Niko and his family were away, his cousin Kayla was staying at his house.

On the night of April 19, Kayla was sitting in the living room of the Ohannesians house on Oak Street, right next to Laurel Street, when she heard gunshots. Within seconds, Kayla realized bullets had gone through the house.

Niko was with his dad when his mom called, saying, “Kayla is at the house and she said bullets were shot through our house!”

Niko was watching TV when he noticed his house was on the news channel.

“I yelled at my dad to come and see our house, it was on TV!” he said.

“The marathon bombing was broadcasted on every news channel all over the world, so, of course my family knew what was going on, and I think that scared us even more.”

Kayla handled the situation very well at the time because Niko and his family were very calm, he said.

“She was on the phone with my parents for a while, explaining to them exactly what had happened, how nothing was damaged, and that everything’s fine,” he said.

Niko and his family went home the next day as planned. Once they got home, he said, “Police officers and people were trying to talk to my parents, but it was tough because we weren’t home, so we didn’t have any good answers.”

Kayla was the one everyone really wanted to talk to.

She was the one there when everything had happened. News reporters were hanging around the house for about a week and a half, he said. Even international reporters were interviewing Kayla.

“People from all over Boston would drive by and slow down to see some of what happened on Laurel Street,” he said.

A few bullets had been shot through the wall near his front door.

Another is stuck between his dining room ceiling and his bedroom floor. Because of its location, it is still stuck there.

Niko found three bullets, although the police took them.

“You could find more bullets down the street near Oak Street and Laurel Street intersection,’’ he said. “I also found a bullet on my driveway, but then I lost it.”