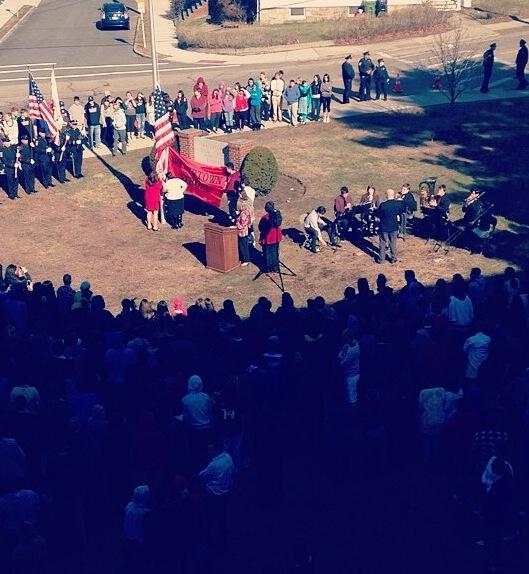 If you ever find yourself driving down Common Street, be on the lookout for the “Watertown Strong” flag that flies under the American flag outside of Watertown High School.

The flag stands as a reminder to the town of Watertown of what our heroes have done. It is a reminder of what the Watertown police and fire departments did in April 2013.

On Friday, April 10, 2014, at 8:30 a.m., the students at Watertown High filed into Shaw Auditorium for a much-anticipated event — the raising of the “Watertown Strong” flag.

Mary Russo launched a new class this year called Transition to Success. The class came up with the idea of selling wristbands so it could have money to buy the flag dedicated to Watertown’s police and fire departments for their work helping capture the Boston Marathon bombing suspects.

(Once the fire department found out about what the class was doing, it offered to pay for the $345 flag. The money the students earned from the wristbands will go to other school events.)

The WHS a cappella choir, conducted by Dan Wulf, started the ceremony with the “Star-Spangled Banner.” Then Ms. Russo gave a powerful speech about the respect and admiration she has for the students she has taught this year, as well as the police and fire departments.

Ms. Russo said Dr. Fitzgerald helped make the event possible and invited her to speak on stage as well.  Then came time for the students of the Transition to Success class to shine.

Senior Mana Farhani started off with a touching piece on how thankful and safe she feels due to the police and fire departments. Farhani gave special thanks to Officer Kelly for her work at the high school.

Caillie Hughes, with her guitar in tow, sang a song she wrote specifically for the ceremony. The name of the song was “Light the Night” and she was given a standing ovation by the crowd.

Chief Deveau and Deputy Iannetta spoke after Hughes’s song, complimenting her, as well. Both thanked the Transition to Success class for being so thoughtful and the whole school for staying Watertown Strong.

Finally came the raising of the flag.

Everyone went out to the flagpole at the corner of Columbia and Common streets. The students lined the sidewalk while the members of the Watertown concert band and conductor Dan Jordan played. The Transition to Success students helped raise the flag. The flag is 4 feet by 6 feet, with a red background and black lettering with the words “Watertown Strong”. Ms. Lundberg made the closing remarks.

Later on in the week, Ms. Russo was honored with The Raider, a doll figure from the “Raider of the Lost Ark” on a stand. It is considered a trophy to the WHS faculty, who pass it on from one teacher to another when they feel someone deserves it.

Ms. Russo has been honored with The Raider for all her hard work and dedication to the new and successful Transition to Success class and the new flag that flies outside WHS.