After the nation’s first primary, backers explain why their presidential candidate deserves their votes 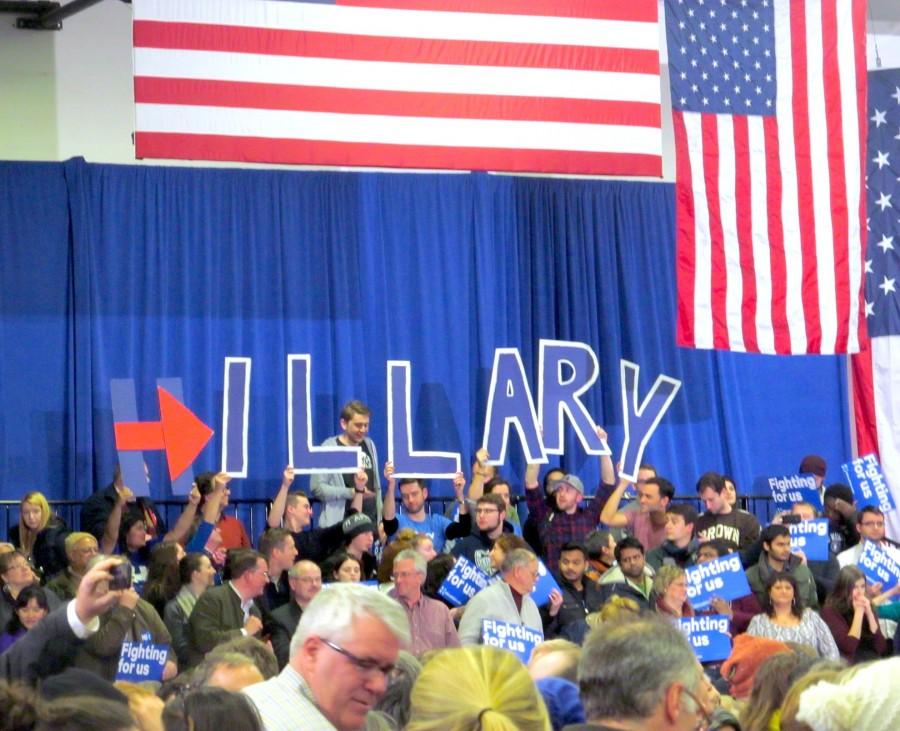 Gallery|17 Photos
Supporters for Hillary Clinton at Southern New Hampshire University show their support before the presidential candidate spoke at her post-election party following the New Hampshire primary on Feb. 9, 2016.

It was a frigid primary night for New Hampshire voters on Tuesday, Feb. 9, 2016, but nevertheless our nation’s fiery candidates were able gather more than enough supporters at their respective rallies. The Raider Times had access to campaign watch parties and spoke with numerous people about this year’s candidates.

The first stop was Trump campaign’s based in Manchester, N.H., where an immense amount of supporters had turned out despite the harsh 16-degree temperatures. So many had showed up, in fact, that they had overcrowded the Executive Court Banquet Facility and created a line that wrapped out and around the building.

Those who had come to see their idolized candidate were sporting quite flamboyant “Trump for 2016” gear. There were people wearing cowboy hats and baseball caps bearing a custom embroidered “Make America Great Again” pattern, young boys and girls waving around “You’re Hired” foam fingers, and most interestingly, a man fully decked out from head to toe in an American flag suit.

The gentleman in the suit, college student Matt, said that he was “most excited to hear the announcement and see Trump in person.” He had never been to a watch party before, and decided to drive to New Hampshire from his home state of Vermont with a couple of his peers.

At one point during the interview, Matt’s friend interjected and asked him to share his views on Trump. Matt said, “Quite truthfully I think [Trump]’s a clown, but I am just happy to be here and see how the theatrics of the Trump campaign unfold.”

Later on, after Trump’s speech Trump supporters inside the function hall were heavily indulging in the cocktail bar and alcoholic beverages, complemented by the music of The Beatles, Rolling Stones, Elton John, and other classic rock artists.

Up the road was Carly Fiorina’s watch party, also in Manchester, at the modest Derryfield Country Club. In contrast to the masses of people at the Trump campaign party, the Fiorina supporters were smaller in number.

“Small in number, but not lacking in optimism!” exclaimed supporter Susan Torrey.

Torrey, a hospitality teacher originally from Lowell, Mass., said, “Fiorina is a business woman distinguished from the others because of her values.”

When asked who would be her second choice, Torrey responded that she did not have one — and that having a second choice meant lacking confidence that Fiorina would win.

When the question of Fiorina’s qualifications came up, Torrey responded by saying that Reagan, too, was an outsider, and Americans will eventually come to recognize Fiorina’s uniqueness.

Even with the supporters’ high spirits, the Fiorina watch party did not come off as an electrifying event.

The Clinton campaign, on the other hand, was a bustling hub of energy and commotion. Before entering the Southern New Hampshire University gym, where Hillary Clinton’s primary night watch party was based, the sound of chants and loud pop music could be heard throughout the building. The chants, which seemed to be spontaneous, ranged from the rhythmic repetition of  “I believe that we will win!” to “When I say Madam, you say President: Madam! President!”

There were certainly a large number of supporters at the event. Catherine, who had an uncanny resemble to Hillary, was given “special guest” access at the watch party because of her volunteer service for the campaign. She explained that has been a supporter of the Clinton family since 1992, and was thrilled at the idea of “a second Clinton in office.” In her opinion, “No person is more experienced to represent America.”

Another supporter, N.H. educator Kevin Fleming, said that he voted for Hillary Clinton because he believes she’s the only Democrat that will win the swing states.

Another reason he approves of the Clinton campaign is Hillary’s support for public education. Proudly wearing his “National Educational Association for Hillary” pin, Fleming shared his fear that a Republican president would will be bad news for educators.

“[Republicans] will want decrease public education spending,” he said “and instead act more in favor of private and charter schools.”

United for Hillary by different reasons, the supporters stood by their candidate after the announcement that she had lost. Clinton addressed the roaring crowd saying, “I still love New Hampshire and I always will!” and “It’s not about getting knocked down, it’s about getting up.”

She walked off the podium to “Fight Song” by Rachel Platten, which was followed by Kelly Clarkson’s “Stronger”. After the speech, Hillary and Bill met and shook hands with supporters. It was time to make one final stop at  Trump headquarters to see the post-victory celebration.

Unfortunately, Trump had not stayed behind, but his supporters were nevertheless very satisfied with results of the night. One woman, who identified herself solely as Lodge, said Trump was on the right path to win the nomination.

Having studied economics and working at the World Bank Organization, Lodge said from a financial perspective, Trump is the most qualified to work on the American economy. She claimed that  “voters are sticking with Trump because he has a concrete strategy that will further America’s position in the global market.”

When asked about how Trump’s inflammatory comments might reflect poorly on his character, she stated that they are proof of Trump’s honesty.

“He says what’s on his mind, and that means people can trust him,” she said. “He is who he is.”

New Hampshire ended up voting for Trump and Sanders. All candidates, however, drew out unique supporters for America’s first primary and helped commence the long journey to Election Day in November.