Even politicians are affected by uncertainty of the times 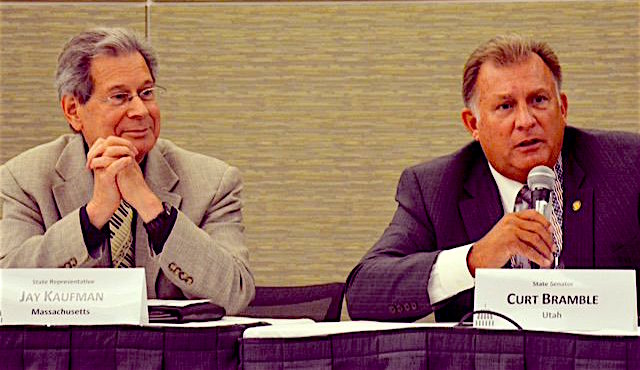 Jay Kaufman (left), a state Representative for Massachusetts, and Curt Bramble, a state Senator from Utah, were part of the National Conference of State Legislators’ 2017 Legislative Summit at Boston Convention Center in August.

In recent months, uncertainty and distrust in the federal government have swept the nation. After a divisive and polarizing campaign cycle — during which many voters were left unhappy with both presidential candidates — the nation has continued to experience deep dissatisfaction. According to a July Gallup poll, the public has a mere 20 percent approval rating of the US Congress.

“What’s going on at the federal level is they’re not getting anything done! And I think the public is sick and tired of that,” said state Senator Nancy Todd, a Colorado Democrat, in a interview.

Todd was one of the thousands of state legislators from across the country who convened in Boston from Aug. 5-9. They gathered for the National Conference of State Legislators’ 2017 Legislative Summit at the Boston Convention Center.  They assembled from far and wide to discuss the issues affecting their respective constituents and to share ideas and strategies for solutions. And, as these politicians gathered to discuss various issues, they were acutely aware of how unhappy constituents are with political movement, both on state and federal levels.

The summit emphasized, however, the importance of state legislators’ impact. One of the Summit’s keynote speakers, Frank Luntz, a political consultant and pollster, said to his audience of state politicians that “The reason why I’m so happy to stand before you is because the public sees you as being the antidote for what’s happening in Washington.”

This dissatisfaction has, for many, dissolved into fear and worry. These are sentiments that seemingly aren’t just plaguing constituents. The Summit’s tone suggested that even state legislators are irritated, uncertain, and nervous about federal politics.

“The fact that I don’t have a clue what’s coming at us keeps me up at night,” said Representative Jay Kaufman, a Massachusetts Democrat who was a panelist at the Summit’s Federal Tax Reform session.

“By the standards established by the social capital index, we are so far behind almost all of the countries that we compare ourselves to, which suggests — to me at least — that the kinds of  conversations that are being framed for us in Washington aren’t even the right conversations,” he said.

Kaufman added that “I am profoundly scared about the future of our democratic institutions.”

This panel, titled “What Could Federal Tax Reform Mean for the States,” focused on how states would be impacted by President Trump’s proposed tax reform policies. Much of the panel, however, was spent frustratedly discussing how the states had very little idea of what federal tax reform could, in fact, mean for them. Since Capitol Hill has been unclear and unpredictable with its plans, the panelists said, states don’t know what to expect and are thus unable to prepare or draw out their own policies.

State Senator Curt Bramble, a Utah Republican, and another panelist, said, “As someone who is involved in the political arena … [and has] been involved in writing about 70 percent of Utah’s current tax structure… I can say quite plainly, directly: I don’t have any idea what is going to come out of this Congress as it relates to tax reform.

“We can talk about the various components and hypotheticals of how [federal tax reform] would impact the state, but in terms of trying to forecast what Congress is going to do? Boy, that’s anyone’s guess.”

Thus, the state of federal policy left the state legislators feeling a lack of control over their own states.

“This Congress has not been able to move any major initiatives … which just drives the uncertainty that we heard from our constituents,” added Bramble.

“In New Mexico, we are dealing directly — and out of my district, my community — with ICE [Immigration and Customs Enforcement] and border control deporting our people,” Soules told Ellison, who is Deputy Chair of the DNC. “And it’s sad. Please include that as you talk, because the rest of the country doesn’t see it and feel it like we do.”

Soules added how awful it was, “In our schools and our communities, having ICE members there picking people up out of churches, schools.”