Standing up — or sitting or kneeling — for what’s right 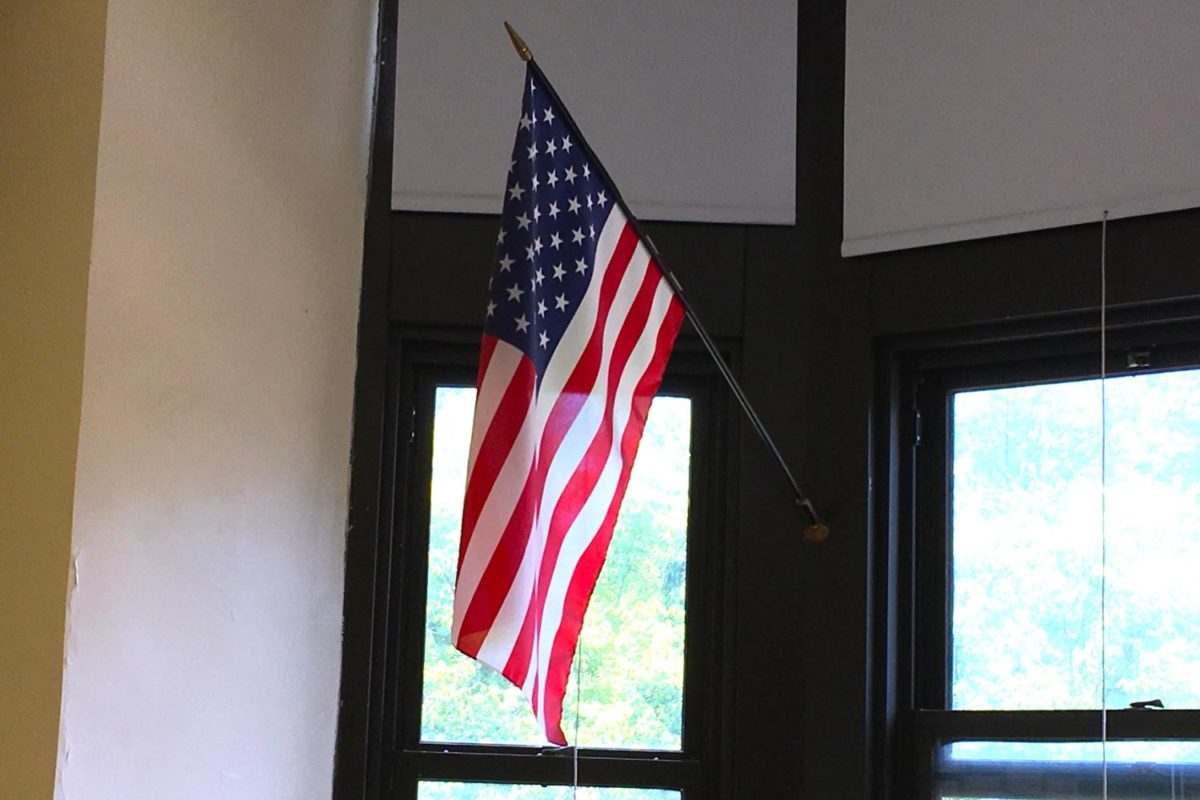 American flags hangs in many of the rooms throughout Watertown High School.

“They are standing up for the right that people have died for, but, as long as they don’t turn their back, I have no issue with it,” Deborah Johnson said.

Ms. Johnson, the foods and nutrition teacher at Watertown High School, served in the Massachusetts Army National Guard and is known throughout the school for her fiery patriotism and love for our country.

Ms. Johnson only has an issue with people who turn their back to the flag or are not being present during the national anthem. She thinks that the flag is a symbol of those who died for our country and kept us free. However, she says, it is their right to protest, so she sees nothing wrong with taking a knee.

Everyday around 8 a.m., right before the morning announcements, the president of Watertown High’s senior class leads the whole school in the Pledge of Allegiance. Students generally rise, put their right hand on their heart, and face the flag in their first-period classroom. This is followed by a moment of silence.

Recently there has been a lot of debate about what people should actually do during the Pledge or when the national anthem is played.

Shirley Lundberg, the WHS principal, was asked if there are any rules requiring to stand while the Pledge of Allegiance is being said in school. Her answer was there are “no hard lines” but the saying of the Pledge is a state regulation.

“If a student doesn’t want to stand, then don’t participate quietly,” she said.

She commented that there are differences and that nobody will be forced to do anything. Principal Lundberg, who is from Canada, said standing is still a sign of respect and she always stands, even if she is not native to the United States.

Brian Brewer, WHS dean of students, disagrees with protesting during the national anthem, but fully supports the right people have.

“I mean this is sports,” he said. “I would never do that, but I am fully with the right [to protest].”

Kraig Gustafson, a US history teacher and Watertown’s social studies coordinator, is conflicted on the topic.

“On one hand, the national anthem and Pledge is not political statement, just an affirmation of American values.”

Mr. Gustafson explained that the treatment of professional athletes in the outside world isn’t equal, and they are provided an opportunity through sports to make a statement in the public eye. The position that they hold — with fans in the millions — can be used to draw more attention to the inequality they still face.

He says that kneeling is harmless, and any type of protesting will get negative attention. On the other hand, he thinks that teams should be united, and they should all be present for anthem.

James Buck, another WHS history teacher, said, “It is perfectly their right to do that.”

“Freedom of speech isn’t just for speech you agree with,” he said.

He believes that that is the reason soldiers fight, so we have a choice in what we do.

Elizabeth Mundy, a science teacher at WHS, has a very strong opinion on the Pledge of Allegiance. She believes that people should have a choice.

“I would never, ever, ever, force anyone to participate in the Pledge of Allegiance,” she said.

Physics teacher Matthew Rose believes that those athletes have a right to take a knee, although he always wants the reasoning behind it.

“Most people don’t understand the First Amendment,” he said, “Soldiers fight for that right.”

Ally Kennedy, a 10th-grade athlete does not support the players kneeling. She believes that it is disrespectful toward America and the flag.

“Everyone should stand because people fight for us everyday and we take things for granted,” she said.

Kerri Toland, a WHS senior, thinks it not such a good thing that people are kneeling. She thinks that they can’t be forced to stop, but knows they are disrespecting our military.

“People should not kneel because respect should be shown towards the troops,” Julia said.

Yoseph Hamad an 11th-grade athlete, shared his pro-kneeling views. He believes that as Americans everyone should have the option and if he saw someone kneeling he wouldn’t mind.

“I’d be fine with it. It’s because they are expressing their freedom of speech,” he said.

Anthony Chebli and Christine Zhu, both 11th-grade student-athletes, at Watertown High School said that they would not mind if others knelt during the Pledge of Allegiance during the school announcements in the morning.

Anthony said, “I agree with what they’re doing and everyone’s entitled to their own opinion.”

Much like Anthony, Christine said, “I would support them because as long as they have sound reasoning behind their actions, and it’s morally what they believe, then I support it.”

Oliver Eason is a 10th-grader with very positive views for kneeling. He was very adamant when he said, “I wouldn’t think that what they were doing was wrong, I would join them.”

Junior Jimena Canales said she thinks it’s a bad way to protest, and thinks it’s disrespectful, but she also knows that it’s their right to stand or not.

She believes that people have the right to do that. What you do doesn’t affect anyone else so why should it bother them?

Freshman Adam Haloui said, “They have the right to do what they want.”

Winter Mahon, a 10th-grader who plays basketball, volleyball, and runs track, believes that kneeling and standing are “both ways to respect the flag and respect America.”

She thinks that kneeling isn’t disrespectful and that people and athletes should be allowed to do it.

Nayeli Torres, a 10th-grader, said, ”Standing or kneeling, you’re still being respectful to the flag and to all those who are serving . . . It’s not a big deal at all.”

Girls soccer coach Ralph Angrand thinks that there’s a good and there’s a bad side of it. He believes that the players are sending out a message by standing up (or sitting down) for what’s right — or kneeling for what’s right. He recognizes that these are protests against police brutality and violence against African-Americans.

He said he believes the message being portrayed is: “We can all come together and make great things.”

Ms. Johnson, when talking about how President Trump handled the NFL players kneeling, said that is a whole other issue. She thinks that as soon as young people are able to cast a ballot, they should.

“Register to vote to change the world,” she said.