The Democrat from Maryland talked Climate Change, President Trump, unifying political parties, and more during 45-minute Q-and-A on May 3

Presidential candidate John Delaney (standing, middle row, fourth from left) poses with students and teachers after a question-and-answer session at Watertown (Mass.) High School on May 3, 2019.

Delaney represented Maryland’s Sixth District in the House of Representatives from 2013-2019, and was the first prominent politician to announce a run for the White House. He formally announced his candidacy nearly two full years ago on July 28, 2017.

On the campaign trail, he visited Watertown High School on May 3, 2019, and talked with a lecture hall full of students and educators. The 45-minute question-and-answer included conversations about Climate Change, President Trump, unifying political parties, and what it’s like to run for president.

Here are highlights from his Q and A at WHS. (Transcript edited for clarity and space.)
John Delaney, on running for president …
“As an elected official, you have the privilege of serving this magnificent country, which is what I think it is: both a privilege, and a magnificent country, even with all its imperfections.  People who have the privilege of doing that really should be doing things to make a difference in the lives of the next generation.

“Our fundamental responsibility is to leave the world better than we found it, and to do that, we actually have to do things.  We have to roll up our sleeves, find common ground, and get things done, and that approach has defined my career in Congress.

“I was always considered one of the most productive/bipartisan members of Congress, which meant I worked with people on the other side of the aisle — I’m a Democrat, but I work a lot with Republicans to get things done because that’s what I think my job is.

Presidential candidate John Delaney talks with students and teachers during a question-and-answer session at Watertown (Mass.) High School on May 3, 2019.

WHS: “How do you think you would be a better president than Donald Trump, knowing that you are also a businessman?”
Delaney: “My business track record is very different than the president’s, so I’ll start with that. I started two businesses from scratch. My dad was an electrician, he didn’t give me any money to start, the only thing he did is he helped me carry in some furniture in my first business, that was kind of the only thing he ever did for me.

“My businesses were very successful, they were very admired in their communities, they always got voted best places to work, and we really were engaged in our communities.  So I’m really proud of what my companies did. And they operated all around the country. They did what I think good businesses do, which is, they hired good people, they took care of their workers, and they were engaged in their communities, and they paid all their bills …

“The second thing is I actually rolled up my sleeves and served in the Congress of the United States, which I think is incredibly important.  I don’t believe I’d have the ability to be the President of the United States if I had never done public service before. But I’ve had six years serving in Congress, and I figured out how the government works. The government’s different than anything else.  You have to actually understand how it works.

“The third way I’m very different from the President, to be honest with you, is I’m a unifier. I think the central issue facing this country is how divided we are. It’s how, increasingly, our political leaders look out at the American people and say: ‘Your enemy is your fellow American,’ mostly because they’re in a different party. So many people, whether Democrats or Republicans, in public service these days, they act like half the country is entirely wrong in everything they believe …. Sure, we have disagreements, and you join one political party because of your views compared to the others, but I really believe we have much more in common with each other than what divides us.” 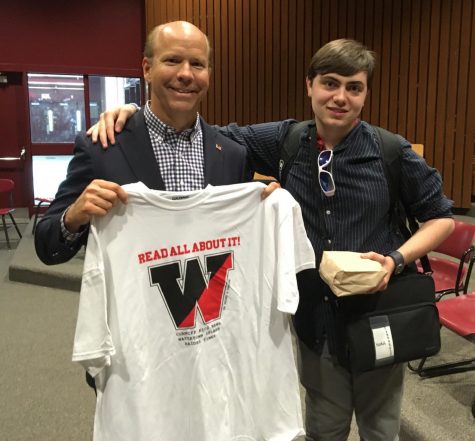 Presidential candidate John Delaney poses after a question-and-answer session at Watertown (Mass.) High School on May 3, 2019.

On national service …
Delaney: “I think every one of you when you’ve graduated from high school should have an opportunity to serve your country. Not an obligation, you don’t have to do it, but a really exciting opportunity to either join the military, do community service, be part of a new infrastructure program to build parks and stuff like that, or become part of something I’m calling the Climate Corps, where you go around the country and you’ll help communities build their infrastructure for sustainability, or help seniors retrofit their homes for environmental sensitivity.

“It would be a national service program where kids’ll sign up for it, and they’d get stationed with other kids all over the country, so some kid from Watertown will mix with some kid from Iowa, and they’ll go to New Orleans, and they’ll work on a park together. And we’ll give them a break on their student loans, if they’re actually doing something with their hands maybe they’ll get a certificate.  I think stuff like that can really bring us together.”
WHS: “How much does it cost to run for president?”
Delaney: “A lot … You break it down in phases. So, the first caucus is in Iowa, that’s in February of next year, so about 10 months.  Pretty much between the start of running for president and the Iowa Caucus, people will spend about $20 million running for president.  And that’s to have a team of people — I’ve got 50 people on my team — that’s to create ads and send out mail and have events and all those things.

“After Iowa, through the rest of the Democratic Primary, it could cost another $50 million.  And then if you’re the nominee? So if it’s President versus a Democrat? They’ll spend over $500 million dollars. It’s a lot of money.”
WHS: “What are your thoughts on Climate Change?”
Delaney: “So Climate Change and Global Warming is a huge issue for your generation. It’s clearly happening … “I think we have to have a goal in this country of getting to net zero by 2050, meaning our net carbon emissions are zero. And it’s a very important part of my administration to get there.  I think I have the best plan to do it, and my plan has a couple of parts to it. One of it is I want to put a price on carbon, in other words a carbon tax, just like we have cigarette tax or alcohol tax. Those taxes make things less attractive. So it will raise the price of fossil fuels, and make renewables more competitive. And I want to take all the tax money and just give it right back to the American people. So I want a disincentive for the American people to use fossil fuels …

“The second thing I want to do is I want to invest in innovation, in batteries, in transmission technologies.  Because we will never be able to get to net zero unless we are able to figure out how to better store energy and move it. Because right now a lot of our renewables — wind and solar — are wasted because you can’t store the energy, and when you transmit it you lose a lot of energy. One of the best ways of producing energy is to conserve all the energy that’s lost. So I believe we fundamentally need new technologies and batteries and storage, and I want to take the Department of Energy research budget and increase it by five-fold, so that we actually can crack the code on some of these technologies.”
WHS: “What about nuclear power?”
Delaney: “I’m all for nuclear. Now nuclear has its issues, which is: How do you store the waste? But if you ask me which problem I’d rather deal with — storing the nuclear waste or dealing with Climate Change — I would much rather deal with the nuclear waste issue. Because if we don’t get our world to net zero emissions by 2050, the world could warm more than 2 degrees Celcius, and none of us know what that means. I don’t think you can be for dealing with climate change and against nuclear power.”

Presidential candidate John Delaney talks with students and teachers during a question-and-answer session at Watertown (Mass.) High School on May 3, 2019.

WHS: “In your experience, what has and hasn’t worked in uniting people across party lines?”
Delaney: “I think there’s a lot of things that we agree with each other on in this country. Let me give you one easy example: infrastructure. Rebuilding roads and bridges. Improving water systems. There are a lot of water systems in this country that are 100 years old and people get poisoned. That stuff there’s a lot of agreement on. Democrats and Republicans together want to do that. But the problem is, our leaders never talk about those things. They only talk about the things that divide us.

“Think about it like, with your friend. Imagine one in particular, and imagine something that your friend does that you don’t like. So imagine if your whole relationship with your friend were talking about those things … and that’s the problem with politics. We never talk about the things that we agree with each other on.  And why don’t we do that? Because it’s not good politics.

“So what that means is right now we have an incentive in our politics not to talk about the stuff that actually matters to people, where we could potentially find common ground, because that’s almost kind of boring. It’s not clickbait, as they say. We have an incentive just to go after the other side, because that’s what gets people going. But what that does, is it also destroys our politics …

“We have a really bad incentive system right now, where the behavior that is rewarded in politics is the exact opposite of the behavior you need to do your job well.  And so, as a result, we have a lot of people in politics who are not doing their job well…