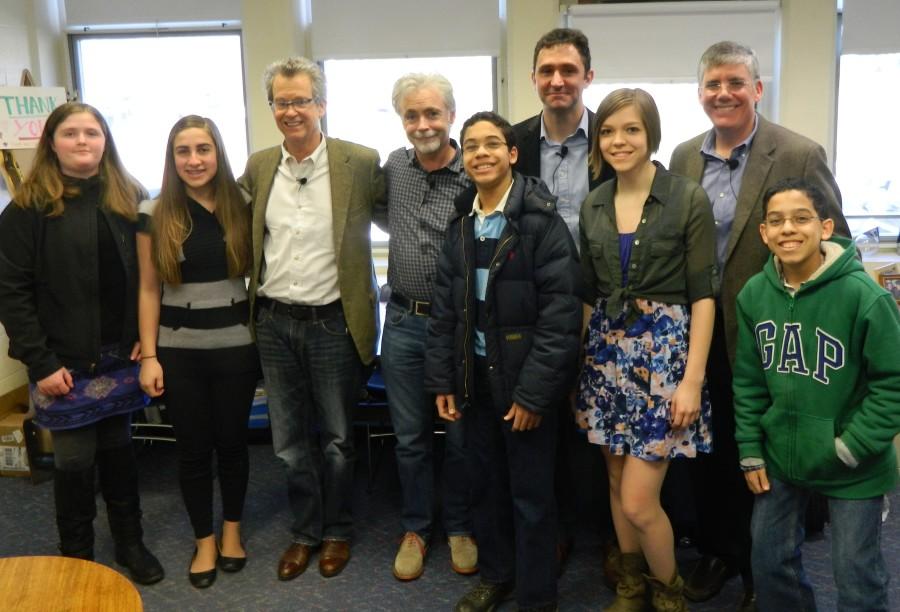 Is the entire culture of the literary world simply an oxymoron?

Books, whether they are nonfiction reference journals about physics or whimsical youth fantasy novels, are generally viewed by the public as a gateway to knowledge, enrichment, and empathy. The collective thought is that reading allows a person to place himself or herself inside the mind of another human being.

Reading can develop social understanding and form connections between people. However the act of reading itself is a very solitary activity, as is the work of the author behind the ink.

Life as a successful novelist typically consists of many long days, sitting at a desk, alone, in an office, alone, sipping tea maybe, or coffee, and hearing little, aside from the clacking of the keyboard and the occasional ring of a telephone. The stark contrast to this solitary lifestyle was the feature of the “Mega-Awesome” event on April 6, 2014, that authors Rick Riordan, Eoin Colfer, Ridley Pearson, and Jonathan Stroud reveled in the most.

This was the first day the four Young Adult authors had ever been in the same room at the same time.

As Ridley wandered the halls, interacting with fans waiting in line, the rest of us sat about in a brightly lit Dana Hall classroom decorated with field trip photographs, art projects, and now a collection of students, teachers, and writers. There was an electric energy that seemed to buzz between the authors.

All three of the men were so different: three different accents, three different writing styles, three very different senses of humor. Eoin would listen to the questions we asked and the careful, articulate responses given by Rick and Jonathan, then he would  slide in his remark at the end, a quick bit of extremely witty, dry humor.

Yet there was a connection between them that very rarely gets to be acknowledged due to the solitary nature of their careers. Coming together for this one-time only event gave the authors a chance to sit down and laugh at the similarities in their own personal stories.

Writers are notorious for lacking self confidence and this was a sentiment agreed on by all of the very successful authors in the room. Rick Riordan, author of “The Lightning Thief,” along with many other popular youth novels, some which have been made into movies, says that before any event he still worries if anyone will show up.

Eoin agreed, saying that there are days when he feels like the novel he is working on is the best one he has ever written and then, just hours later, he believes it is horrible and unworthy of being read by anyone at all. He says that fear is something that never goes away no matter how successful you become, but that an aspiring writer should fight through the fear and not be held back by it.

While Rick spins stories of Greek and Roman mythology, he sits in his new office in Boston overlooking the city which he has realized is quite a bit more distracting than the country. When Eoin sat down to write “Artemis Fowl,” he was in his horse stable that he converted to a studio, which “still smells a bit horsey.” Jonathan is content to write as long as he has some biscuits and tea nearby.

They all chose to take that scary first leap and subject their writing to scrutiny and criticism in the hopes that they would find success. They all chose to travel their own unique path, and be adventurous. And they all found success taking those risks and chasing after their dreams.

Eoin noted that in life society drills people with the expectation that they stop day dreaming, grow up, and become hard-working, mature adults. But, for a writer, it doesn’t have to be that way.