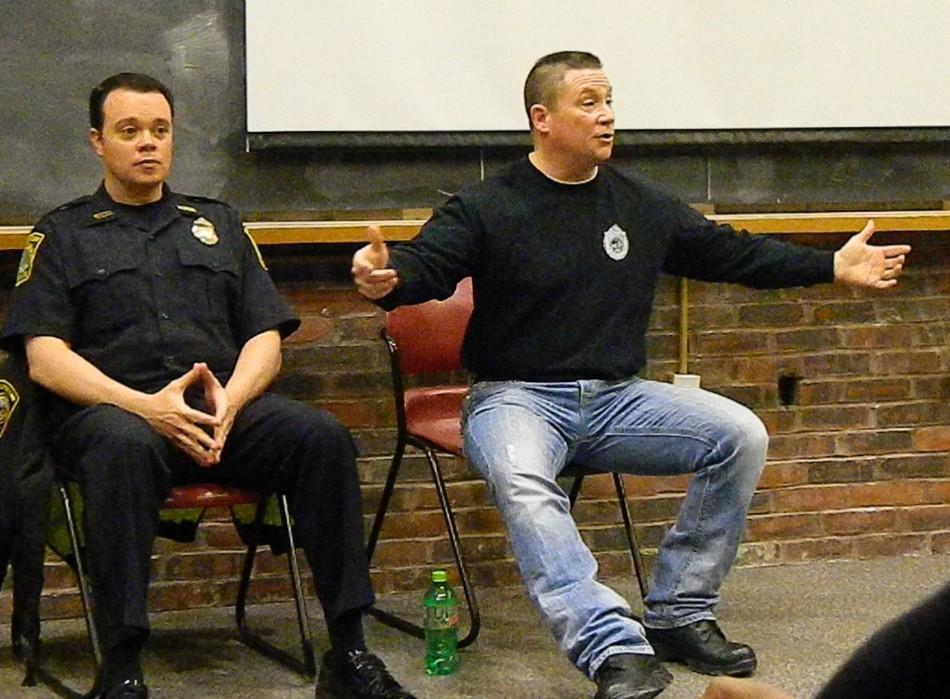 Gallery|7 Photos
Sergeant John MacLellan (right) talks about the events of April 19, 2013, during a visit to Watertown High School on March 10, 2014. Watertown Police Lieutenant James O’Connor is at left.

“This is how I am going to die,” thought Sergeant John MacLellan. 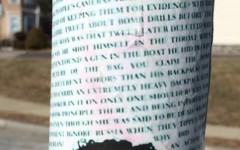 Many police officers thought about this in Watertown during the night of April 19, 2013. The intense look on Sergeant MacLellan’s face captivated the audience, especially when he described when Tamerlan Tsarnaev was mortally wounded and when MBTA police officer Richard Donohue was shot and rushed to the hospital.

Some people wonder how Dzhokhar got away.

The scene got pretty crazy. After getting bombs thrown at them, shots fired at them, and seeing a police officer badly injured, it was hard to find a guy who escaped in a car into the night.

Three members of the Watertown Police Department — Detective Lieutenant Michael Lawn, Lieutenant James O’Connor, and Sergeant John MacLellan — came to the Watertown High School lecture hall on March 10 to talk with students about the gun battle and the 23 hours of searching for the Boston Marathon bombing suspects. Two of the officers, Lieutenant O’Connor and Sergeant MacLellan, are WHS graduates.

When Sergeant MacLellan was telling the story to the students, he seemed to be reliving the unexpected events, from the moment when he first saw the vehicle to the capture of the second suspect. There was never a quiet moment, there was always a bomb going off or the sound of a gun.

Everyone knows about the Boston Marathon bombings and the shelter in place on Friday, April 19, as police searched Watertown for the second suspect. What not everyone knows are the little details about how it all went down.

After the shooting of MIT officer Sean Collier and the carjacking in Cambridge, the scene moved to Watertown.

Sergeant MacLellan was one of the first officers to find the stolen car, having no idea the people in the car were the Boston Marathon bombing suspects.

In the WHS lecture hall, the officers explained the average shootout lasts about 20 seconds. This one lasted for seven minutes.

Near the end, Tamerlan began moving toward Sergeant MacLellan. He was tense.

Tamerlan is tackled from behind. Officers wrestle with him. This is when Sergeant MacLellan thought he was going to die.

“They had been throwing bombs at us,” he said, “so I thought he might have a vest on and was going to blow us all up.”

Instead, the younger brother drove at them. He missed the officers, but ran over his brother.

It wasn’t until after the gun battle was over and Officer Donohue was in the hospital that Sergeant MacLellan found out that these bad guys were the Boston Marathon bombing suspects.

One student asked Sergeant MacLellan, if he could change anything about that night what would it be? He said he wished he was able to get his rifle out. Getting the rifle, he said, could have ended the whole situation a lot faster.

Any police officer who had a huge role in the manhunt took about 16 days off of work and went through therapy to make sure they were ready to come back. The Watertown officers are doing OK, it is a new normal for many. Sergeant MacLellan said it is strange now that people he has never met already know him.

About a dozen Watertown Police officers will run the Boston Marathon April 21. It is one of the many events in the area that will mark the anniversary.

Saturday, April 19  — one year to the day of the shootout and manhunt — there will be the Watertown Police Finish Strong 5K Run/Walk. There will be a lot of people on the streets of Watertown. This time for something fun.

(To register as a runner, walker, or volunteer for the Watertown Police Finish Strong 5K, go to http://www.watertown.racewire.com/event.php?id=1795.)

Leave a Comment
About the Writer
Heidi Rush, Staff Writer