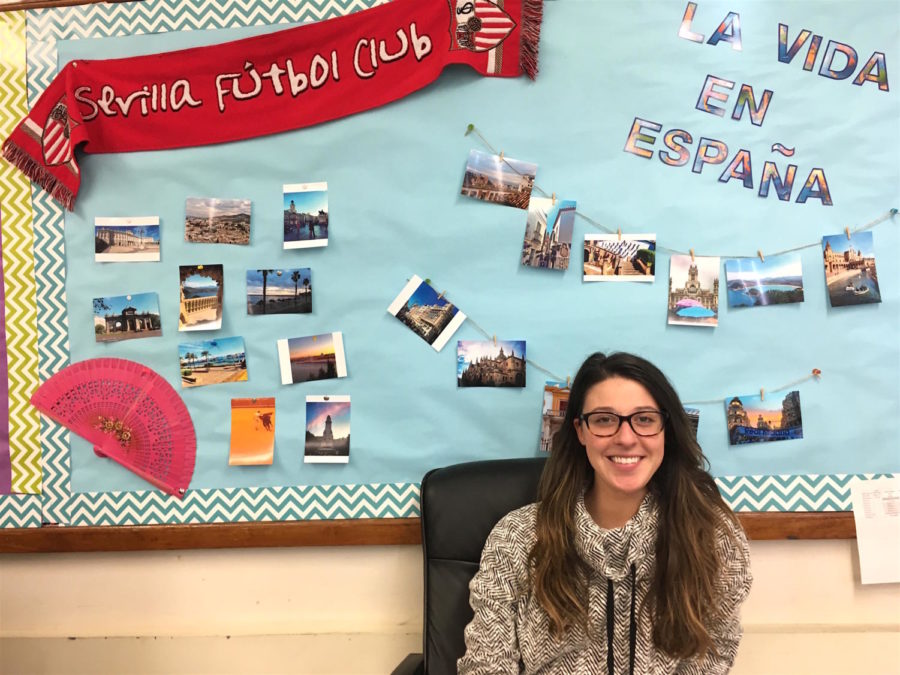 As many students may know, there is a new Spanish teacher here at Watertown High School. Her name is Hallie Lutz and she is excited to start new this year!

Here is everything to know about WHS’s new professora.

Senorita Lutz grew up in Farmington, Conn., and began learning how to speak Spanish in sixth grade. Senorita Lutz went to college at Penn State, where she double-majored in world languages education and Spanish.

After she graduated in May 2016, Senorita Lutz taught English in Madrid at a bilingual secondary school for one year.

After living in Spain, Senorita Lutz came to Watertown on Aug. 28, 2017. She said she decided to move, and teach in Watertown because her sister teaches third grade at Hosmer Elementary School.

Another reason she came to Watertown is that her sister’s husband grew up here and went to Watertown Public Schools. She was inspired to work where her brother-in-law had gone to school. She also really wanted to live in Greater Boston, an area she already knew that she loved.

“After being in a foreign country for a year, I wanted to live in a city that was relatively close to my family in Connecticut,” she said.

In Senorita Lutz’s opinion, the biggest difference between teaching in the United States and teaching in Spain is that “In the U.S,, you can create a better classroom environment,” whereas in Spain she had to teach in different classes.

“It’s more comfortable to have one classroom,” she said.

Another reason is that she feels the students here are more connected to school. “There is a larger sense of community,” she said.

Senorita Lutz said she loves working in Watertown, but her favorite thing about WHS are the other language teachers.

In her spare time she loves to sing and play guitar. She loves music. She also loves to explore and find good restaurants to eat at.

If Senorita Lutz could have any other profession, she said she would love to work in the music industry. (Possibly as a famous singer.) Or she would be a food connoisseur. She would love to travel the world as a food blogger and be able to try new foods and experiences.

As for a special talent, Senorita Lutz says she can talk with her mouth closed.

Senorita Lutz is thrilled to start teaching in Watertown this year, and we can’t wait to start learning!