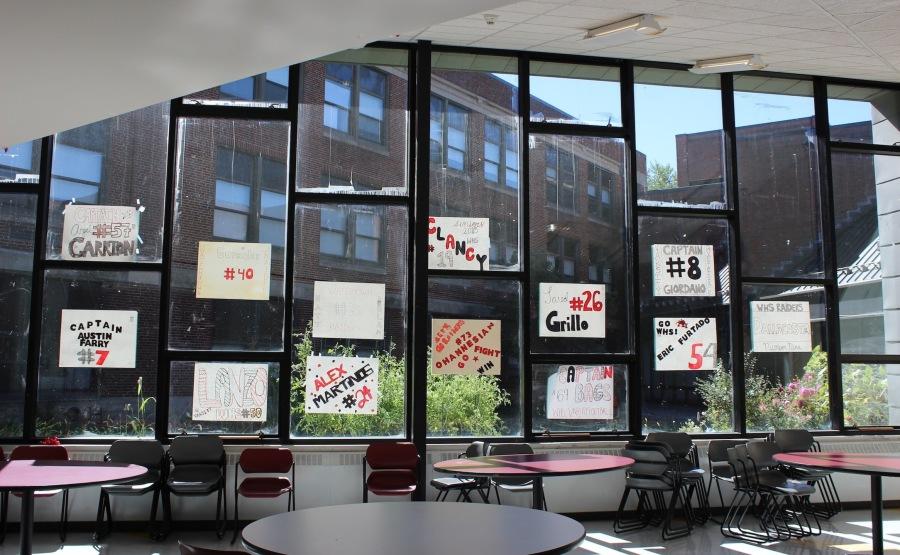 Posters made by the Watertown High cheerleaders hang in the cafeteria bump during school on Friday before the season-opening game Sept. 12, 2014. The Raiders beat Medway, 21-6, at Victory Field.

On Friday, Sept. 12, the Watertown Raiders football team opened their 2014 season with a 21-6 win in a nonconference matchup against the Medway Mustangs.

It was important that the Raiders got off to a good start to their season in this home opener.

The game began as soon as the clock struck 7:05. It didn’t take long for the Raider offense to get on the same page: Senior quarterback Nick Giordano took the third play from scrimmage to the end zone with a 60-yard run to put the home team up 7-0.

It was back and forth for the whole first half, with both teams’ defenses on lockdown. This gridlock ended when senior running back Greg Danehy of the Mustangs took a 58-yard run all the way for a touchdown. The Mustangs missed the extra point, leaving the Raiders leading by a slim margin of 7-6.

On the next drive, Watertown sophomore running back Deon Smith took the handoff from senior Austin Farry on a reverse to the end zone for a 72-yard touchdown.  The Raiders took a 14-6 lead into halftime.

The second half was all about defense. Both teams stopped each other on each drive of the half until Giordano ran for his second touchdown, a 43-yard run.

Both sides put up a tough fight, but the Raiders came out victorious.