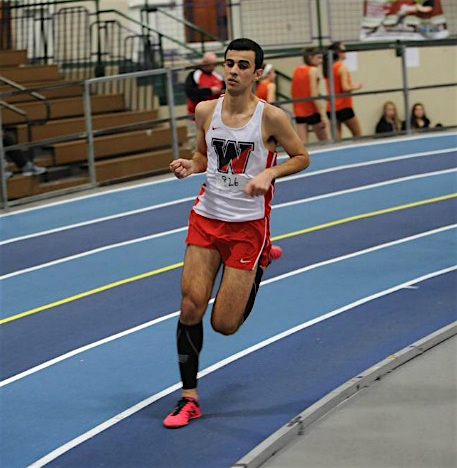 For Amin Touri, sports have always been a must. The range of athletics he’s played include soccer, baseball, and basketball, but his primary talent was that he could run. And not just run, but run well, as evidenced by success on the high school cross-country and track teams.

However, Amin played soccer for his first two falls, and only after suffering from multiple concussions did he move onto to running cross-country. Despite the concussions, some of Amin’s most memorable experiences from WHS athletics come from soccer, as he cited the tournaments as the toughest games he ever played in high school.

“The stakes got higher and higher, and I learned how to perform under pressure,” he said.

And what’s kept Amin motivated to be a 12-season athlete despite the concussions and pressure? “Mostly competitiveness, I like to compete, that’s why I do it.” he said.

To future athletes, Amin advised putting in a full effort and not cutting corners. He believes there’s no substitution for hard work, and says that extra effort put in as an underclassmen pays off later on.

Individually and teamwise, Amin’s efforts have most definitely payed off. He’s had eight Middlesex All Star selections in: cross-country, indoor 1,000, high jump, 800-meter dash, 400-meter dash, and outdoor mile. Amin was also runner-up for Middlesex League Most Valuable Player for Indoor Track, and says that out of all the sports he did, indoor track is his favorite.

“As much as I enjoyed soccer, I was never as good at it as I am mostly running in circles,” he said. “Cross-country’s way too long; outdoor track is really windy…I just love the feel of indoor.”