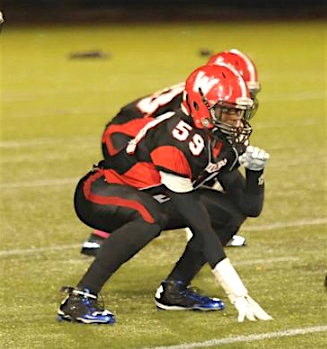 Farid Mawanda has been playing on the WHS football team for four years. Most recently, he was a linebacker and a tackle, but he’s tossed the pigskin around since the third grade.

Farid’s favorite part of the sport was building relationships and making new friends over the years. His least favorite? “Losing those friends when they graduate,” he replied sadly.

Reflecting on all the games he’s played, Farid said that the hardest one was versus Wilmington, when a number of WHS key players were absent. The small number of players who were there had to deal the obstacle, but Farid was able to find strength and power through.

He said what’s been keeping him motivated over all these years is the pursuit of personal improvement and fitness for the game.

Farid was part of the team that became Middlesex League champions in 2014, and last fall helped lead the Raiders to the North finals..

Next year he will be attending Saint Anselm University to study biology, and Farid is thinking of becoming a physician’s assistant in the future.