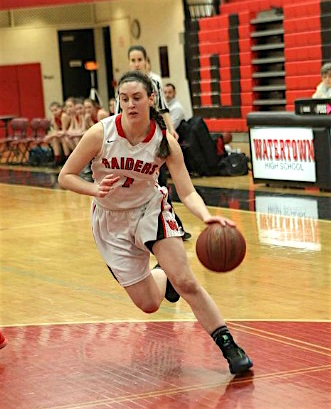 Felicia Korte has been a leader on WHS’s basketball courts since her freshman year. In ninth grade she played a power forward, and finished her season this year as a wing player. Felicia is part of the phenomenal team that made it to the North Sectional finals all four years, winning it in Korte’s junior and senior year.

In 2015, the Raiders lost in the Eastern Mass. finals at TD Garden, but all that changed this year with a victory against Oliver Ames High School, propelling the team into the state final. Though they didn’t win, this year was the first ever for WHS girls’ basketball to make it that far!

Out of all the games she’s played in, Felicia says the toughest one was “definitely the North finals this year against Belmont. Just the intensity of the game, the difficulty, and the commotion that was the crowd.” She also cited the change in venue from UMass-Lowell to Woburn High School and foul trouble as additional challenges the team faced that night.

Basketball, besides being an athletic outlet, she said, has also been a sport that allowed her to “be a better person and build long lasting friendships with people at the school and with outside people [she’s] met.” It was that combination of interpersonal/athletic development as well as a special sibling that inspired her to start in the first place.

In the sixth grade, Korte watched her older sister, Francesca, enjoy playing basketball on the middle school team, which eventually went undefeated. After seeing her sister’s great experience, Felicia knew she wanted to play as well.

Besides the school team, Felicia also plays AAU (Amateur Athletic Union) for the Boston Showstoppers basketball club. With that team, she’s played games across the country, and made friendships she knows she’ll “be living through forever.”

Certainly next year both school and club teams will be missing Felicia as a key player and kind friend.