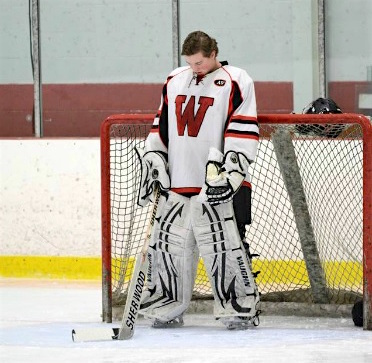 Ice hockey is a classic winter sport, and no one knows that better than goalie Jason Hughes. He’s been playing the sport for 10 years now, and had a crucial role on WHS’s team.

Jason’s best memory was winning the 2015 state championship because it was the goal he’d been working toward all his life. Getting close to this coveted goal three times, but losing the playoffs during his freshman, sophomore, and senior years, are Jason’s worst memories.

Of all the games he’s played, the hardest one was against Burlington this year. Jason says it taught him and teammates “when you play your best and got everybody working together as one, you can achieve a common goal.”

In addition to teamwork, Jason says that hockey has helped him learn the importance of perseverance, and compared being down in a game to being down in life. In both scenarios, he said, “you just got to do whatever you can to get back on top.”

Something that’s helped him with hockey has been the experience of playing multiple sports. With golf, Jason’s picked up the skill of patience, and just like after he’s missed a crucial putt, on the ice he has to refocus after missing a save. With lacrosse, using fast movements and fast legs applies to his role in hockey, where he has to be quick in defending the goal.

Although Jason says hockey and lacrosse are both equally his favorite sports, next year he will be playing lacrosse at Assumption College.