The Raider Times • May 25, 2016 • https://raidertimes.com/sports/2016/05/25/michaela-antonellis-reflections-of-watertown-high-senior-athletes/ 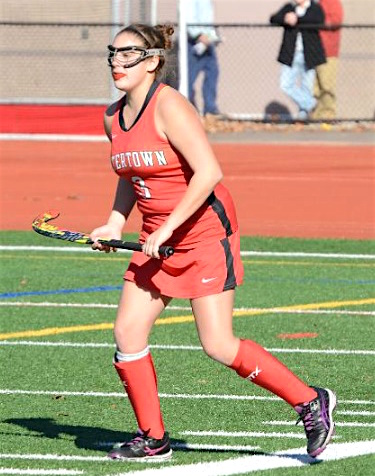 Meet Michaela Antonellis: WHS field hockey sensation. Not only did she start off playing varsity as a freshman, but she also held every position on the team. That’s goalie, forward, midfield and defense — all in one year. As a senior, Michaela finished her final season playing defense.

To say that she’s created a legacy in the WHS field hockey program would be an understatement. Personally, Michaela was a Middlesex League All-Star three times, and for all four years she’s played, the team won the state championship. To top it all off, she helped lead WHS’s girls to beat the national undefeated streak, which currently stands at 160 games.

And the hard work has not gone unnoticed; Michaela’s rightfully earned a field hockey scholarship and will be playing for Stonehill College this fall.

The journey to get to this point hasn’t been easy, she admits. Despite the occasional freezing practices, Michaela’s stayed motivated over the years by coach Eileen Donahue, the challenges that field hockey presented, and also the added pressure to keep up with the national streak.

She says her success comes from an internal motivation to be the best that she can be, and advises players of the future to “worship every second on the field, and never give up”.

In addition to field hockey, Michaela played basketball in the winter, and finds an overlap between both disciplines. The same motions used in field hockey, such as cutting and calling for the ball, apply to basketball, and additionally the coaches have relatively similar styles, she said. Both Coach Donahue and basketball coach Pat Ferdinand place an emphasis on personal improvement in addition to becoming a better team as a whole.

When asked which of the two sports was her favorite, Michaela replied she couldn’t pick, “I’m playing field hockey next year, but I’ve been playing basketball my whole life.”