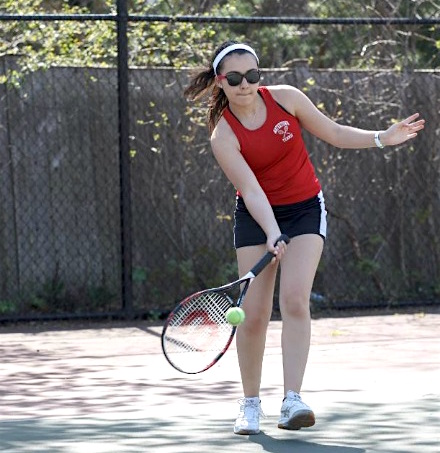 For senior Sofia Farhadi, tennis is much more than a sport. A late starter, Sofia’s been playing on the WHS girls’ tennis team since her sophomore year, and says was the first sport she has played where the team felt like a family to her. It was tough in the initial phases, she admits.

“My worst memory was starting out and just being absolutely terrible.” she said.

But that’s not the case anymore. As a senior, Sofia is now a captain of the team and plays varsity matches regularly. In the past, she was on varsity sporadically, and has lasting memories from the first time, a match versus Winchester. Going up against the No. 1 team in the state, the outlook was bleak, but Sofia learned from and worked hard with her doubles partner, Sedra Katerji.

Sofia recalled, “[Sedra] taught me what’s important is developing your own skills, not worrying about the score, and making yourself better.”

And that individual improvement aspect of the sport, coupled with the goal of strengthening the team as a whole, is what keeps Sofia motivated. Next year, though she won’t be playing tennis on a collegiate level, she is considering continuing tennis on an intramural level.