Dennis-Yarmouth too much for Watertown 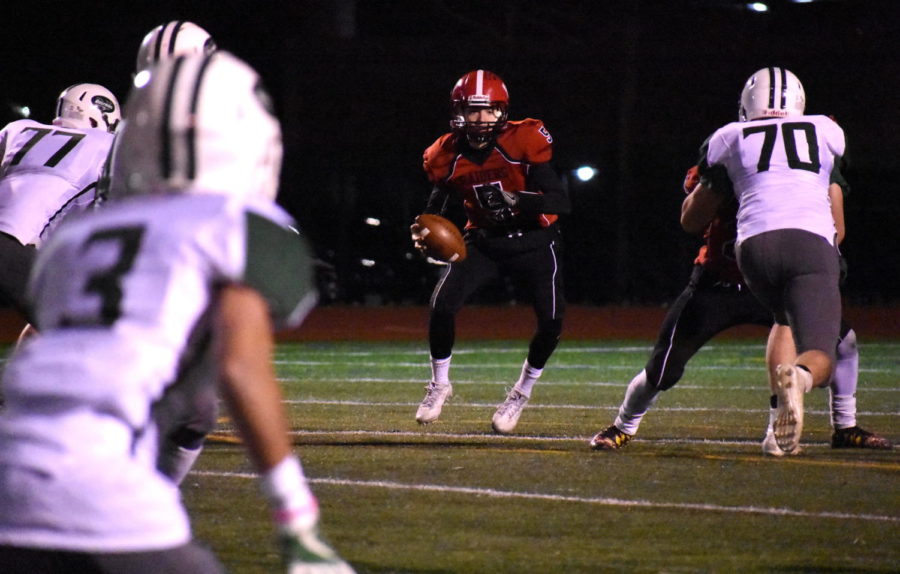 Watertown High lost to undefeated Dennis-Yarmouth, 41-3, in the MIAA Division 5 state semifinals at Hormel Stadium in Medford on Friday, Nov. 17, 2017.

All good things must come to an end.

The Watertown Raiders football team finally met their match, falling, 41-3, to the Dennis-Yarmouth Dolphins in the MIAA Division 5 state semifinals on a cold Friday night at Hormel Stadium in Medford. Riding the momentum from three consecutive upset wins into the matchup, the heart and grit of the Raiders (6-5) was finally overcome by the dominant South champions. Dennis-Yarmouth (11-0) advances to the Division 5 Super Bowl at Gillette Stadium on Dec. 2.

“We came out and gave them everything we had,” said Watertown coach John Cacace. “I’m nothing but proud of these guys. This is one of the all-time great seasons in Watertown history.”

Watertown won the Division 5 North championship this season for the first time in school history.

The Raiders kept it close in the first half, holding the explosive Dolphin offense to just one touchdown with two minutes left on the clock. Talented running back Bobby Evans scored the touchdown, and was a nightmare for the WHS defense all night, as the evasive senior rushed for 189 yards on 19 carries.

Although D-Y seemed like the dominant team for most of the half, Watertown was scrappy and came up with a number of defensive stands to keep the score at 7-3 until near the end of the second quarter. But the Raiders put up only 58 total yards of offense in the first two quarters, as they were hindered by a number of penalties and turnovers.

At the end of the half, the Dolphins roared back to life. Led by quarterback Jacob McCarthy, D-Y put together a last-minute, 65-yard drive with a perfectly executed a lob pass to Daryan Thompson in the back corner of the end zone to take the lead 14-3 going into halftime.

Watertown’s only points of the day came when senior Conor Kennelly drilled a 51-yard field goal with 7:38 to go in the second quarter, making the score 7-3. This broke the thought-to-be school record he previously set at 48 yards.

Dennis-Yarmouth would receive the ball at the start of the third quarter. On its opening drive, Evans fumbled the ball, and the Raiders looked to get back into the game by adding on another score. However, Watertown fumbled it right back to the Dolphins a few plays later, neutralizing the opportunity.

From this point on, the Dolphins kicked it into high gear. Senior Jonah Arsenault punched in a 3-yard touchdown run with 5:28 remaining in the third quarter to make it 21-3, and the Dolphins never looked back. Dennis-Yarmouth would add on two touchdowns in the quarter to go up, 35-3.

The Raiders never stopped fighting, despite the score of the game. They kept frustrating the D-Y offense and kept driving down the field on their own possessions. Although the loss was not the outcome they had hoped for, the Raiders left everything they had on the field, something nobody can take away from them.

Moving on, Cacace and the Raiders are looking at one objective only: Beating Belmont.

The annual rivalry game that takes place on Thanksgiving Day will see the successful but banged-up Raiders clash against the 3-8 Marauders. The Raiders aren’t treating this game lightly, though. Watertown has won the past five matchups and have no desire to lose that streak this year at home at Victory Field.

“From this second forward, that’s our focus,” Cacace said. “It’s a great rivalry and a great tradition that means a lot to many people and our kids. We’re gonna be ready for Thanksgiving.”