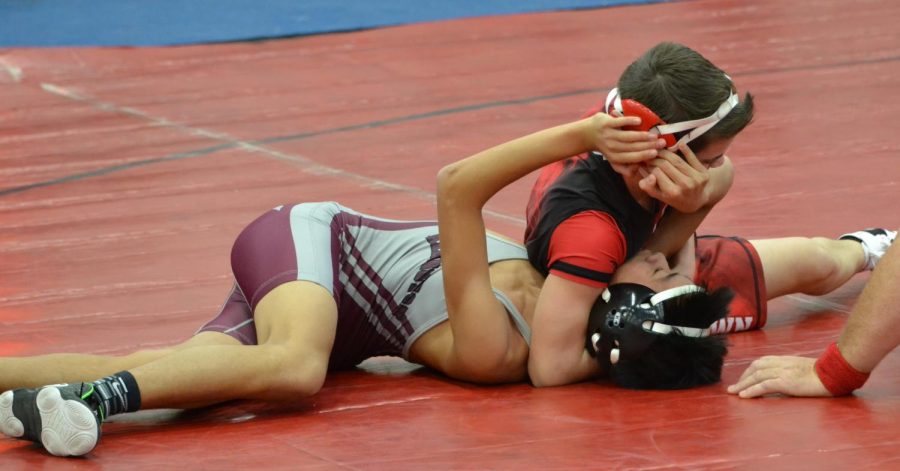 Watertown's Bo Leitner was in control during this wrestling match from the 2019-20 season.

As hockey and basketball players tighten up their skates and shoes to get on the ice and courts, many Watertown High School athletes are scrambling to find a new winter sport or riding out the winter without an extracurricular activity. Among those sports that were excluded from the winter season was wrestling.

When COVID-19 cases went on the rise again, the wrestling season was thrown to the wayside as school and MIAA leaders across the state were forced to choose which high school sports could be played with the least amount of risk.

Wrestling and cheerleading were moved to the spring season and are scheduled to start in April, if conditions allow it.

The Raider Times talked with WHS assistant wrestling coach Brian Foye and sophomore wrestler Bo Leitner about how they they were going to miss most about not being able to participate in wrestling this winter.

“I understand why they cancelled it, but I think there should have been a way to make it happen,” said Bo. “This year’s season was important because of the amount of seniors on the team.”

Bo was asked what is his favorite part of the wrestling season.

“My favorite part of the season was seeing the results of all the hard work we do, such as in matches, and the commitment from the team,” he said.

Mr. Foye was asked if he was optimistic that there will be a wrestling season in the spring.

“As the 2020 catch phrase goes, I am ‘cautiously optimistic’ that there will be a wrestling season in the spring,” he said. “With certain changes and specific regulations, I am hearing there could be a season [possibly outdoors]. I believe some states outside of Massachusetts are planning to have a wrestling season in the spring/summer of 2021. If that can be pulled off safely, then it is great news.

“So, I think it could happen, but I would not be shocked if things were postponed until December 2021.”

Mr. Foye was also asked about his favorite part of wrestling season.

“When I competed, my favorite part of wrestling were postseason/year-end tournaments,” he said. “There is a great energy when wrestlers from all across the state vie for a title, but only one comes out on top.

“Another great part of the sport is the camaraderie shared among teammates. The season is often a grind and it is usually more work than fun. This creates a bond between teammates. If there is no season, I think a lot of kids will miss out on the social aspect of the sport.”

Mr. Foye was asked if he had a message for wrestlers who were missing out this winter.

“Advice I give to Watertown High School wrestlers — veterans, rookies — and wrestlers across the state would be: eat healthy, drink water, stay active [pull-ups, push-ups], remain positive, be respectful to everyone — including family, friends, teachers — and do your homework!”