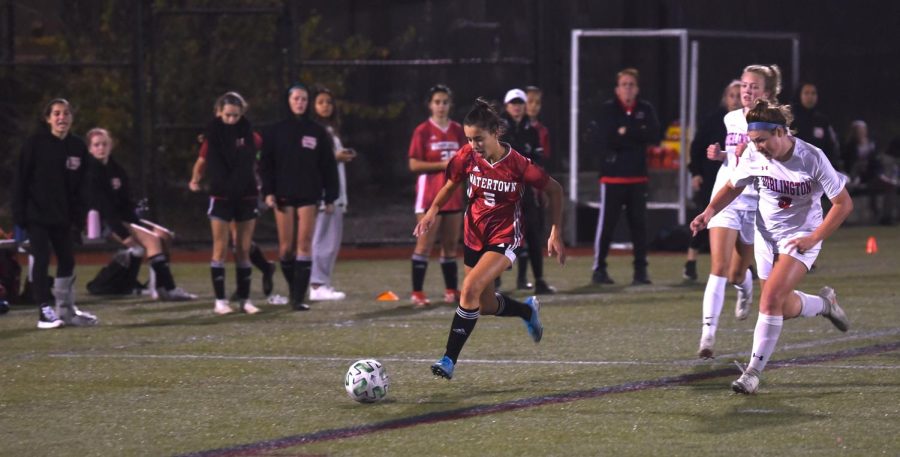 Action from the Watertown High girls’ soccer game with Burlington on Oct. 22, 2021, at Victory Field in Watertown.

Girls’ soccer at Watertown High School is almost like a family. You see the players during the team’s pasta dinners. Sitting down around a long table laughing and cheering as a family does. Fighting over who’s first in line for the dinner and dessert.

“I considered these girls like family,” said Alex Thuene.

Alex, a senior, plays holding midfielder and outside midfielder.

“My position involves a lot of running, playing holding mid you have to be calm,” she explained.

She was then asked about what people get wrong about the WHS girls’ varsity team. She said she thinks people just don’t take girls’ soccer that seriously.

According to Alex, practices are hard. She added that girls’ soccer holds people to very high standards and practice is serious. Still, through practices and games, the girls stick together.

“We have all been there for each other, we’ve all cried together, we’ve been through it all together,” she said. “Going through the worst of times has brought us together.”

“I consider these girls as my family,” she said.

She said the pasta dinners help bring the team together.

Claire plays defense. “Not the most difficult position,” she said.

She said there are girls who play much harder positions than she does, giving the midfielders as an example.

“You can’t let the other team get by you because you are the last line of defense,” explained Elsa.

She was asked if she thinks the position she plays is hard.

“It depends on what your strengths are,” she said. “There’s more to the sport than just running and it’s not ‘too’ easy. To be good you have to work hard to get better.”

Elsa plays for a club team, too, but said she thinks high school games are much harder than club-level games.

“Just as hard, if not harder, since I’m playing with people even older than me,” she said.

As a freshman, was high school soccer what she expected?

“It isn’t now that I’ve played, but it was harder than I expected the first time I played,” she said. “High school games are harder.”

Claire is also one of the captains of the team. She said her responsibility as captain is “to create a safe environment.” She also stated that she thinks is very important for the players

“to understand and respect each other.”

She thinks that this brings a team together and helps the team work together, and who would disagree with that?

Is high school girls’ soccer serious? Yes, according to Claire.

“Hard when first started,” she said.

She was asked, if she had to describe the Watertown girls’ soccer team in one word, what would it be?