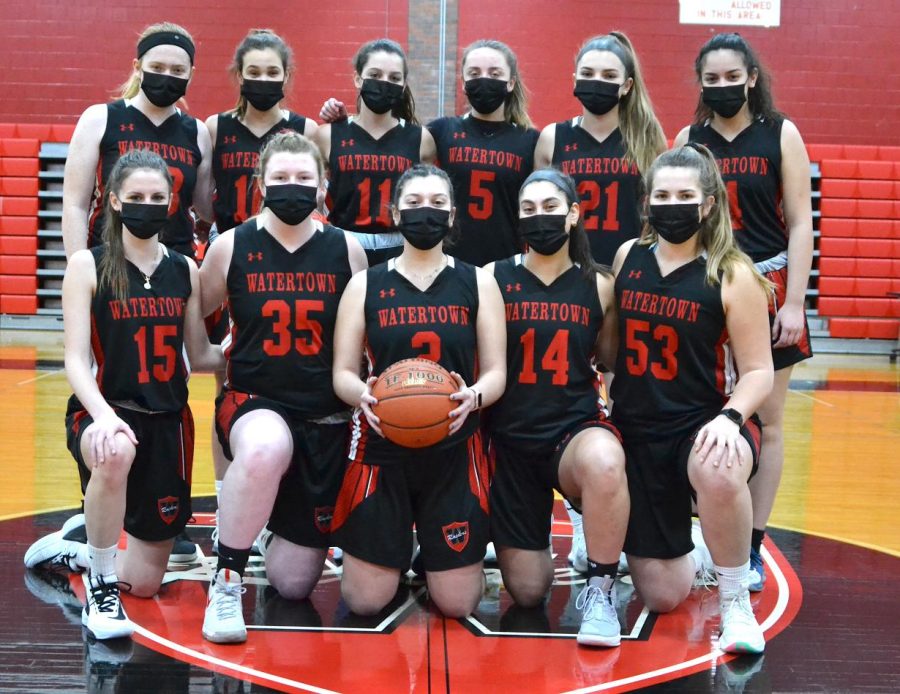 Balls bouncing on the court, sneakers squeaking, yelling where you are on the floor and whistles blowing. Working your hardest to earn playing time. Having trust in one another that you’re there to support each other. The Watertown High girls’ basketball season is only days away.

“I think we have potential to be one of the most deepest team we’ve had in a while,” said Pat Ferdinand, the girls’ varsity basketball head coach.

Coach Pat has been coaching at Watertown High School for 10 years. Now with the upcoming season counting down, Coach Pat and his players are looking forward to having a successful season, especially after being affected by the pandemic last season.

Senior Captain Taylor Lambo, who has been playing basketball since first grade, stated, “I am really excited about this season because we should be back to what it was like before COVID. I think we had a lot of potential last year but the limited practice time and fewer games sort of held us back.”

On the other hand, last year was an opportunity for the eighth-graders since they got to play at the high school level.

Taylor said, “We also were able to have eighth-graders on JV last year so they have all experienced our practices and should be ready for this year.”

The freshmen make the team better by challenging the upperclassmen for playing time, so everyone improves their skills.

Sophomore Sarah Morrissey, who’s been playing basketball since first grade, said, “I’m excited to meet with the new freshmen and see how successful we are this year.”

As for the ninth-graders coming in, they are excited to be with the WHS players since they weren’t around everyone that much because of COVID.

As for goals, Taylor hopes to get far in the playoffs since it’s her last year here at Watertown.

“We are hoping to win the Middlesex League this year,” she said. “We have done better and better each year and I think this year we have a really good shot to win the league.

“I also really hope we are able to be competitive in the [state] tournament. Every year we have made it to the second round of our playoffs. I am hoping to make it further this year.”

Taylor and many others on the team have winning as one of the major goals. As for Victoria, just being able to join the team this year is one of the goals she has set for herself.

“Making varsity would be one of my major goals for this year, but also hoping to get a lot of playing time and contributing to the team by shooting a lot and staying aggressive,” she said.

Meanwhile, the players are continuing to get ready.

Sophomore Lily Lambo, who started in first grade, said, “We do captain’s practices and team lifts, and for people like me and many others on the team also play AAU basketball.”

Coach Pat said he is expecting the players to be working hard throughout the offseason.

“Kids want to be at a certain level, kids want to be up here,” he said, while holding his hand up to his head, “but kids sometimes do not want to do the work to get up there, they do the work that only gets them to maybe lower than half.”

Working hard is extremely important to Coach Pat. No matter what grade you are, if put in the work, he will see that. That is one of Taylor’s favorite things about him.

“Pat also doesn’t play people based on age. If a freshman comes in and is better than a senior, then that freshman will play. This allows for everyone to be competitive with playing time,” she said.

During the season, many of the practices consist of long hours of hard work and getting the plays down. But the coaches make the practices fun and have a good atmosphere.

“Our practices are always very competitive and we work hard,” Taylor said. “One thing that I love about our practices is that we get things done but also are able to have some fun. We are serious, but I don’t dread practices.”

Practices vary, while some drills are used each year. Coach Pat said, “Drills are traditions.”

As a result, WHS girls’ varsity basketball has a bond. There aren’t two different teams, there is one program.

“It has been a great experience,” said Taylor. “Playing against bigger and stronger people my freshman year helped me get better as a player but also has really helped me to mature.

“It was hard at first. I wasn’t taller than everyone anymore and it wasn’t as easy for me to score or just play at this level. I worked to not let it get me upset and worked to change my game to get better. I am really thankful for how much it has taught me.”