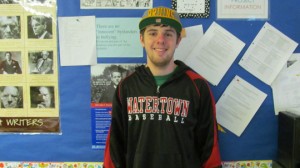 Dylan Feeney, senior at Watertown High School, is excited to be a part of The Raider Times staff for the 2012-2013 school year. Even though this is Dylan’s first time in the media, he loves writing, depicting the current news, and putting in his own ideas. After playing sports his whole life, Dylan hopes to go out for the sports section. Dylan also hopes to gain experience from journalism, “I want to make the story as interesting as possible without altering it and advance my way of writing and gaining a unique voice.” Dylan hopes to take that experience and go to school for journalism after graduating. When asked what he believes his strong point will be in this class, Dylan says believes his writing and editing will be what he’s best at. Dylan loves to read and write, which by default makes English his favorite subject, he says he is “just lucky they were in that class.” After this course, Dylan plans to write about sports and politics.