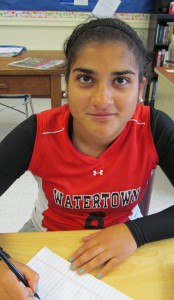 Tenth grader and first time staffer, Sahar Khan, is looking forward to her 2012-2013 role on the Raider Times. Having first heard of the class at the beginning of her freshman year, but being unable to enroll, Sahar is looking most forward to going out in her free-time and doing fieldwork, such as conducting interviews and doing hands-on research, which in the long run she hopes will help with her other classes, and make her a better writer.

Since third grade Sahar has enjoyed writing, and hopes to continue with it in the future, while simultaneously working as a medical professional. Apart from browsing Twitter, reading mystery and romance novels and avoiding television, in her free-time, Sahar enjoys being active, playing numerous sports from soccer to field hockey, which in regards to the Raider Times, she feels she would take pleasure in writing about. As well as writing about athletics, Sahar is also looking forward to writing about the more “factual, creepier news, and not about celebrities.”

Despite her excitement and eagerness to get started, Sahar is most nervous about keeping to her deadlines and above all doing well in the class, as well as going out and conducting interviews and most of all, photography. “I took a photography class last year but I wasn’t very good at it. I think what will make me nervous is taking pictures.”

All in all, it will be a great new year on the Raider Times staff, especially with the help of new staffer, Sahar Khan.