Cast excited by chance to play “The Pajama Game” 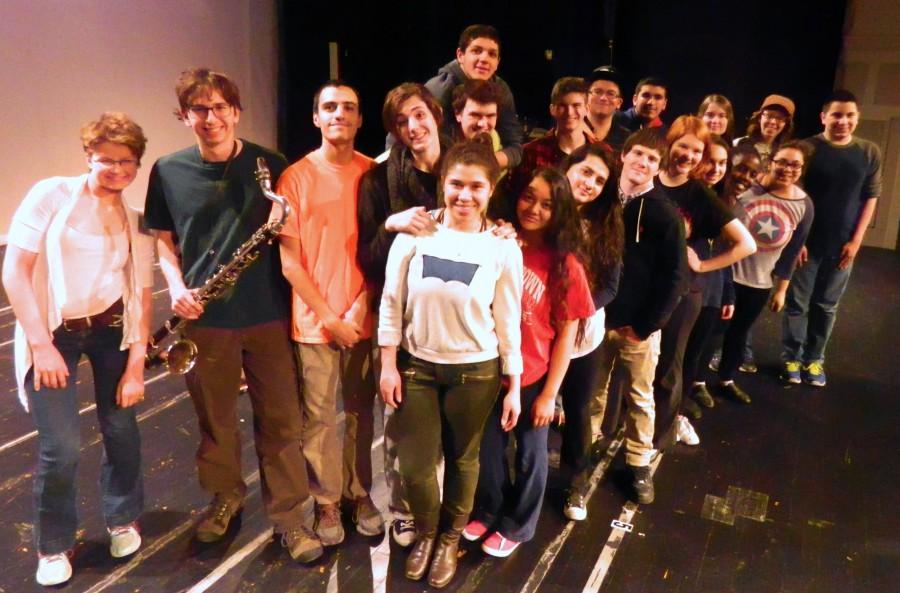 The cast of “The Pajama Game” takes a break from rehearsal to pose on the Watertown High stage. The cast will be in full costume this week when the curtain goes up on the WHS spring musical Thursday, March 19, through March 21, 2015.

We all know 7½ cents doesn’t buy a hell of a lot, and it may not mean much to us nowadays, but for the Sleep Tite Pajama Factory workers in Cedar Rapids, Iowa, in the 1950s, it may just be the answer to solving the Pajama Game.

“The Pajama Game,” a musical comedy adapted from Richard Bissell’s “7½ Cents” is the spring musical at Watertown High School this year, and hits the stage March 19-21. The play follows factory workers with their struggle to obtain a 7½ cent raise from their boss, Old Man Hasler (played by sophomore Asher Harris). Along the way, romance blooms between the grievance committee head, Babe Williams (junior Kira Peterson) and the new superintendent, Sid Sorokin (senior Jake Roche).

For many Watertown High students, this the beginning and end of their high school theater career. Incoming freshman Sandra Chacon, who plays the role of Mabel, says it couldn’t be better.

“It’s my first musical at the high school and it’s honestly one of the best experiences I’ve ever had,” she said. “I love being able to work with people who all have different experiences in musical theater. The entire cast has been super friendly and helpful and, as a freshman, it’s nice to be in an accepting environment that helps me grow as an actor. It’s been cool.”

Nareg Kalaydjian, a sophomore who plays the role of Hines, couldn’t agree more.

“It’s been really good so far. Amazing cast all introduced,” he said. “Now we can tell a great story about trust, love, and honesty.”

But for senior Ghi Coulter de-Wit, it’s anything but a happy time.

“It’s really sad for this is to be my last play at Watertown High,’’ she said. “It’s tremendously depressing. The cast is super fun and I’m gonna miss all the theater kids here, but it’s been a very fun musical.”

“The Pajama Game” will be staged at Watertown High School from Thursday, March 19, through Saturday, March 21, at 7 p.m. each night. Tickets will be $10 at the door.

Whether the audience is big or small, one thing is still for sure: as the days close in for the final performance, cast, tech, and pit can agree that nothing will be quite the same as “The Pajama Game.”