It’s been quite a year for Chris Pratt 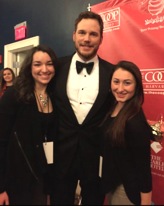 Chris Pratt, Hasty Pudding's Man of the Year, poses with Watertown High School student reporters working for the Raider Times newspaper, at the Man of the Year roast on Feb. 6, 2015.

From playing StarLord in “Guardians of the Galaxy,” to participating in a certain football wager, to making an appearance at Harvard’s Hasty Pudding, there’s no question: Chris Pratt has had quite a year.

The hilarious movie star came from very humble beginnings. Before his career was kickstarted, he lived carefree in a Scooby-Doo van in Maui. His first breakout role was in “Everwood” as Bright Abbott, an attractive, arrogant, and obnoxious jock. Chris then went on to appear in supporting roles in films such as “Bride Wars,” “Jennifer’s Body,” and “Take Me Home Tonight.” Chris never failed to please in his many supporting roles, but got his big break in the hit show “Parks and Recreation.”

Chris played a lazy goofball named Andy Dwyer, who captured audiences with his lack of common sense, and outrageous humor. More recently, his career has skyrocketed, providing him with lead roles in “Guardians of the Galaxy,” and “The Lego Movie,” and this summer he will be appearing in the blockbuster “Jurassic World.”

With the recent success Chris has had, and with his ability to capture audiences, Chris was chosen by Harvard University to be Hasty Pudding’s Man of The Year. Hasty Pudding is the nation’s oldest theatrical organization, and each year it chooses to honor a man and a woman who have made a lasting impression in the world of entertainment.

This year, Chris and his “Parks and Recreation” co-star Amy Poehler were chosen to be Hasty Pudding’s man and woman of the year.

And no, the committee is not biased.

To honor the Man of the Year, Hasty Pudding hosted a celebratory roast Feb. 6, 2015. There was laughter, drag queens, and a surprise lap dance from Chris Pratt himself.

The “roasters” grilled Chris about his not-so-successful films, which he took like a champ, and was quick to fire back like any good comedian would. Chris was a good sport throughout, and he charmed the audience with his good looks and great humor. The hosts of the night then invited Chris on stage, where he was greeted by several drag queens, one of which was the recipient of a lap dance from the honoree. Chris was then presented with his Pudding Pot, for which he was very honored.

Before Chris attended Hasty Pudding Theatricals’s opening-night performance of “Oops!…Madrid it again!” he made his way upstairs to a small room that held a brief news conference. The main topics discussed centered around Deflategate, the Super Bowl, and Chris’s friendly wager with Chris Evans.

Time was limited and only a few people were able to get a question. Fortunately, the Raider Times was able capture Chris’s attention, and asked, “If you had any advice to give to students who aspire to become actors/entertainers such as yourself, what would it be?”

Chris answered every question with thought and compassion and the whole room was taken back by his charm and great personality.  He was down to earth and humble, and it showed with every answer.

While Chris’s main reason for being in Boston was to receive the Pudding’s prestigious award, he also had to fulfill his end of a losing bet. Chris Evans, the star of “Captain America” as well as Chris Pratt’s good friend, was part of a friendly Super Bowl wager. Pratt, a Seahawks fan, and Evans, a Patriots fan, bet that whichever team lost, the loser had to dress up in his superhero costume and go to a children’s hospital of the winner’s choosing. Although Chris Pratt lost the bet, he admitted at the press conference that he gained a newfound respect for Tom Brady.

Not only is Chris Pratt a great actor, but it is clear through his news conference and kind gesture at Christopher’s Haven, that he is more than just a pretty face. Chris is personable, generous, and an all-around great guy.

Emily Carito is in her second year as a member of the Raider Times staff (2013-15). She is currently serving as Classes and Clubs editor and is a member...

Katherine Dolan is a member of the Raider Times staff in 2014-15, and is currently serving on the Executive Board.