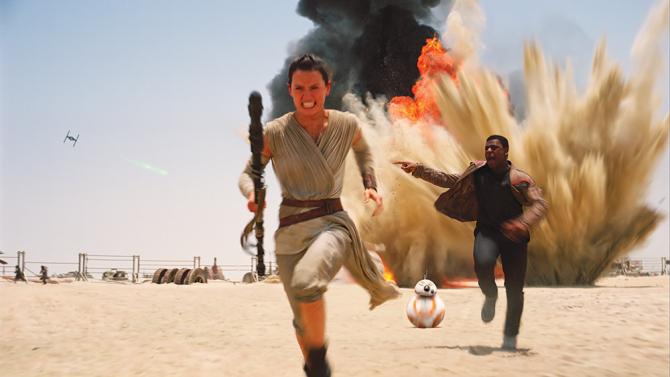 “Star Wars: The Force Awakens” follows Rey (played by Daisy Ridley) and Finn (John Boyega) on an epic adventure across the galaxy.

There may still be some magic left.

Now, 38 years after the original “Star Wars” broke new ground in the realm of storytelling and visual effects, “Star Wars: The Force Awakens,” the seventh film in the series, and the first of Disney’s “sequel trilogy”, opens in theaters on Friday, Dec. 18.

Fans of “Star Wars” series — some of the most dedicated in all of fiction and fantasy — who were so disappointed by the prequels to George Lucas’s original trilogy, will not be disappointed.

J.J. Abrams, who successfully rebooted the “Star Trek” series in 2009, has taken the reins of Disney’s Star Wars sequel trilogy, and he has succeeded.

“The Force Awakens” is a big improvement over the prequel trilogy that preceded it from 1999-2005. It brings a pace the last three releases lacked, and adds stunning visual effects to a story that — though it may not rival Lucas’s original masterpieces — holds its own as the start to the latest epic trilogy in the Star Wars universe.

The plot picks up from “Return of the Jedi,” the 1983 film that is Episode VI in the epic “Star Wars” story arc.

The film, as a standalone, is solid. As the first installment in a three-part trilogy, it serves as an excellent start for a “Star Wars” fanbase still haunted by the widespread shortcomings of the prequel trilogy. The most diehard and nitpicky of “Star Wars” fans will see some minor holes in the story, particularly with some new, unexplained characters, and a clunky reveal or two, but should, overall, see the film as a faithful sequel to some of the greatest movies ever made.

Those who have seen the films, but don’t take it quite so seriously, will really enjoy this film. Audiences who have never seen “Star Wars” and are new to the franchise, will miss out on certain moments, certain nods and references to the original films, but will be captivated not only by incredible visuals, but a compelling story as well.

Overall, “The Force Awakens” is well-directed and well-acted, though a touch predictable. It boasts some of the most impressive visuals in film, something the “Star Wars” saga has always excelled at.

Apart from one casting choice I personally disagree with — a thought I don’t believe I will be alone in thinking — the new cast of characters give strong performances, and will help expand of the most successful movie franchises of all time.

“The Force Awakens” will undoubtedly be one of the biggest box-office successes of all-time, and it is a thrilling hit of nostalgia for audiences who saw the originals more than 30 years ago. It is faithful reboot for the biggest of “Star Wars” fanatics and an excellent starting place for new audiences experiencing, for the first time, a taste of one of the greatest stories ever told.