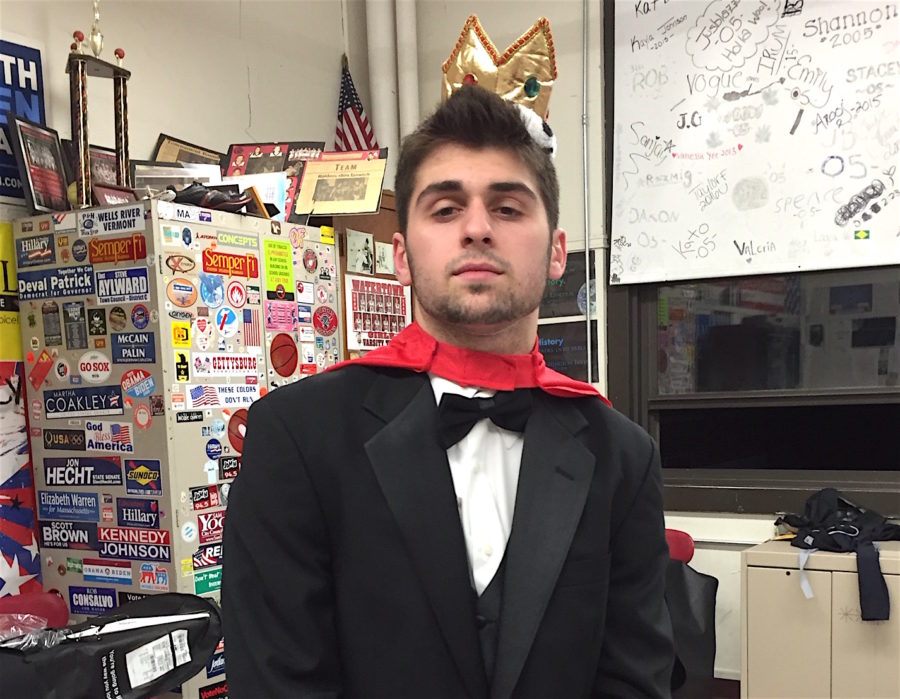 Mr. WHS is a goofy competition where students use their humor, talents, and looks through a variety of acts to determine who truly deserves a crown and the title of “Mr. WHS.” It’s a tradition that started many years ago when, according to dean of students and Mr. WHS judge Brian Brewer, students had seen another school do a similar contest and pushed to have their own version here.

To qualify for place in the competition, all the boys had to do was fill out an application form. The preparation for the show, however, was not so simple.

The candidates only had three official meetings to organize their performances. The first one was just to determine logistics of the night, such as music choices, what acts the students would be performing, and the time constraints for each segment. Next, there was a practice after school to try out routines, fix mistakes, and solidify any remaining details. And then a dress rehearsal only a few hours before the actual show.

There were four segments that the boys had to prepare for: Casual Wear, Talent, Formal Wear, and a Question and Answer. Who was judging the boys? None other than WHS’s own faculty! This year’s panel consisted of Mr. Brewer, Mr. Spillane, Ms. Trenholm, Ms. Hoffman, and Mr. Madden, who all had VIP front-row seats.

Before the competition, a rather long video was displayed showing the contestants’ baby photos and candid video clips of students in the high school. Some of the footage included pre-competition interviews of the candidates, scenes of staged judge bribery, and student opinion on who would ultimately win Mr. WHS.

Then, with the first act of Casual Wear, Giordano and Hughes gave brief, humorous descriptions of each contestant. One highlight was Farrar strutting around in his Batman get-up, garnering laughs from the audience and judges alike. Giordano said that when Danny’s not in class, “you can find hanging out in the library with Ms. Morgan and flirting with all the senior girls.”

Also making an impact was Kennedy in his warm-up basketball uniform, under which he also sported an “S” for Superman T-shirt. Maybe it was an indication of the strong lead he would hold onto for the rest of the night.

Next off, in the talent portion, Amirbekyan showcased his amazing grocery abilities by bagging of a large variety of groceries in a very short amount of time. The skill, obviously honed and perfected through countless hours of dedication, was well received by the audience. Korte’s synchronized swimming, however, was a feat for the ages. To classical music, John and his assistants were able to pull a polished routine, featuring many jumps, and a final lift in the air to seal the act off.

Farrar showcased his dancing in a mixed routine filled with songs that ranged from Rihanna’s “Work” to “Jump on it!” by the Sugarhill Gang. Clancy took a risk with this section, attempting a standup comedy performance meant to showcase his well-known funny personality.

Next, after a brief intermission, the boys were escorted back on stage with various teachers and friends to show off their formal wear. Margosian was escorted on by Felicia Korte and had on an all-black suit, vest, and tie, accented by his Gucci glasses. The remaining contestants also wore black suits, and once all on stage, passed out roses to audience members, with their mothers being the most popular recipients.

Shortly after the hosts announced the start of the Q-and-A session.

Meant to be relatively low pressure, the judges asked the boys a range of questions from what it meant to be a gentleman to whether they’d travel to the future or past. It was at this point where the the front-runners, Kennedy and Farrar established their dominance.

Kennedy was asked about what book changed his life, and he responded that as a child reading “Diary of a Wimpy Kid” altered his perspective on what it meant to be a different size than his others. Farrar, on the other hand, had a question more pertinent to WHS life. He was asked which teacher influenced him the most and why. He confidently answered Ms. Morgan, and cited that he’s spent probably the majority of his school days hanging out in the library, and consequently learning the most from her.

With all the events over, the judges, who had been scoring the boys on a scale from 1-10 points per category, then began tallying up their marks. Meanwhile, the hosts took in some audience feedback, and got some interesting predictions and parent shout-outs.

Finally, a decision was made.

Kennedy was the first runner-up and Farrar emerged as Mr. WHS 2016. Included in his prize was a prime parking spot in front of the school and a free tuxedo rental from Men’s Wearhouse of CambridgeSide Galleria. (Men’s Wearhouse was a prime sponsor of the event.)

In a conversation with candidates after the show, Mr. WHS himself said, “It was probably during my dance routine when they poured water on me in the end that won it.”

As for his weakest moment, Farrar thought that “Maybe the answers about the competition in the video segment could have been better.”

Korte, when asked if he would compete again next year, responded, “I’m saving my talent for senior year.”