“Burn All Night” a party to end all parties 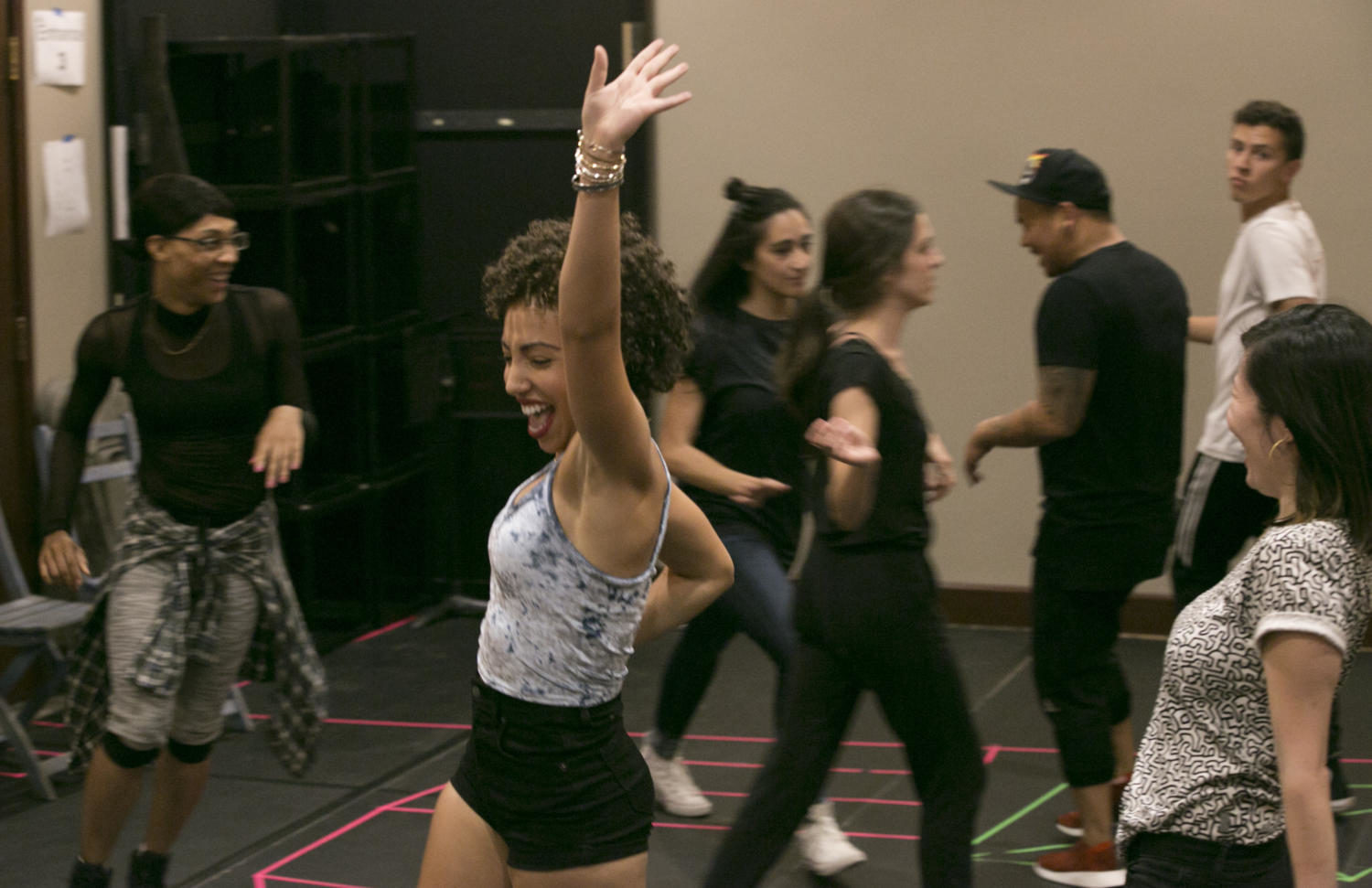 You don’t set out to watch “Burn All Night” like with any other musical. As soon as you step into the Oberon Theater, the show — even before its opening number — promises to be different.

Clinks of glasses emanate from the bar, fuchsia neon light bathes the space around you, and disco balls glitter above your head. Soon, the dynamic cast — scattered among audience members — begins to dance around you, with you, and for you. For the next minute or so, you can barely distinguish audience members from cast members as everyone dances together. The performers then mount the stage to complete the lively opening number.

“Burn All Night,” with book and lyrics by Andy Mientus, had its world premiere Aug. 18, 2017. The show is directed by Jenny Koons and choreographed by Sam Pinkleton, with a score by Van Hughes, Nicholas LaGrasta, and Brett Moses. It is staged at the American Repertory Theater’s Oberon, right in Harvard Square. The nightclub-like space fills with pop-rock music, and you’re simultaneously in a Boston theater, an edgy nightclub, and right there on the New York streets with the characters.

Regardless, “Burn All Night” offers the audience an experience unlike any other: a glitzy night steeped in theatrics, glamor, and youthful antics — and an acid trip for good measure. Kitschy, inventive, and entertaining, it delivers everything you’d want from a night at the theater.

You don’t simply watch these characters navigate their lives, but you participate in their lives. At some point, you become a part of their lives.”

Simultaneously, it realistically unpacks all the complexities that enshroud the life of the millennial.

The show’s backdrop of end-of-the-world earthquakes doesn’t feel too far-fetched given the environmental chaos that has now become synonymous with 21st-century life. To further complicate their lives, each of the characters — true to the average millennial — have large amounts of baggage to deal with (or rather, to ignore and not deal with). Themes of damaged parental relationships, domestic abuse survival, parental loss, and economic hardship plague these characters. They’re left dysfunctional and deeply flawed as they navigate through their daily lives.

Will is here for a good time, not a long time. But when it comes down to it, he hasn’t had a good time in a long time. He parties, enjoys himself, and lives for the moment, but all the while manipulates his relationships because of his own issues and feelings of loneliness. He’s enjoying himself, but is he really?

Zak, on the other hand, is decidedly incapable of enjoying himself. Your classic tortured-artist type, he’s neurotic, consistently surly, and intensely talented. Evoking Jim Morrison with every strum of his guitar, he miserably skulks through his life, breathing but not living. At some point you realize that he isn’t just mopey; he’s dealing with real issues and probably needs therapy. In fact, all the characters need therapy, not another drink.

But these two contrasting characters serve to examine the dichotomy that runs through the entire show. What’s the point in living a hollow life of “fun” if you’re left with no real relationships and a flimsy grip on reality? Or, why bother taking this troubling world as seriously as it should be taken, if you’re just going to be depressed in the process?

This examination feels as topical and necessary as ever. With Nazi rallies in 2017, increasing environmental uncertainty, and troubling levels racial and gender inequality, youth today have a whole lot to grapple with.

To be young, however, doesn’t mean to ponder the dire state of the world (though this may be a familiar experience for many millennials). Rather, to be young means to party, let loose, and enjoy yourself. Said partying can also be a welcome escape from the troubles of millennial life. And “Burn All Night” doesn’t just depict the partying. It is a party.

The club environment and standing audience allow for an audience experience that means you’re not just watching young people let loose, but that you let loose right along with them. You don’t simply watch these characters navigate their lives, but you participate in their lives. At some point, you become a part of their lives.

Oberon Theater’s unique set up makes it so that when the characters  dance, they’re dancing right next to you and with you. When they communicate with each other, they speak from one side of the theater to another, with the audience standing in their midst. Watching the show feels intimate and inclusive, and as a result the show goes from feeling relatable to feeling like your own life.

“Burn All Night” — with its flashing lights and catchy score — depicts the party, celebrates the party, and throws you the party. Then, it takes a cold, hard look at the party. It asks, “How does one be young in a world so troubling? How does one enjoy themselves while dealing with their own personal issues?”

“Burn All Night” succeeds because … it doesn’t totally allow you to escape to some fantasy, glitzy world. It doesn’t tear you to pieces inspecting sorrow, either. ”

“Burn All Night” doesn’t offer you an answer, but, perhaps more realistically, just shows you what it’s like to try. (Although, a guidebook would be pretty handy. If the world needs anything right now, it’s for “How to Succeed in 2018 Without Really Trying” to hit Broadway.)

Earlier this year, many people compared and contrasted Oscar contenders “La La Land” and “Moonlight.” “La La Land,” an ode to jazz and old hollywood, was the glamorous escape that the world in its current climate desperately needed. “Moonlight”, on the other hand, took a hard and necessary look at the tragedies of life in a world fraught with injustice and atrocity.

In comparing the two drastically different films as they competed for the Best Picture award, some argued that “La La Land” should win because it was a stunning feat of movie magic, while others felt “Moonlight” should win because it was an impactful, necessary reflection of society. Again, this argument asks what we value more: charm and escapism, or the real, terrifying inspection of our world.

“Burn All Night” succeeds because it doesn’t succumb to being on either end of the dichotomy. It doesn’t totally allow you to escape to some fantasy, glitzy world. It doesn’t tear you to pieces inspecting sorrow, either. Instead, it moves from “What’s the point of taking the world seriously? We should just party!” to “How can we just party? The world is ending!”

Eventually, it leaves you with the hushed realization that though world’s probably going to continue to be less than ideal, you just have to continue regardless.

(For information about “Burn All Night” and American Repertory Theater, go to http://americanrepertorytheater.org/.)