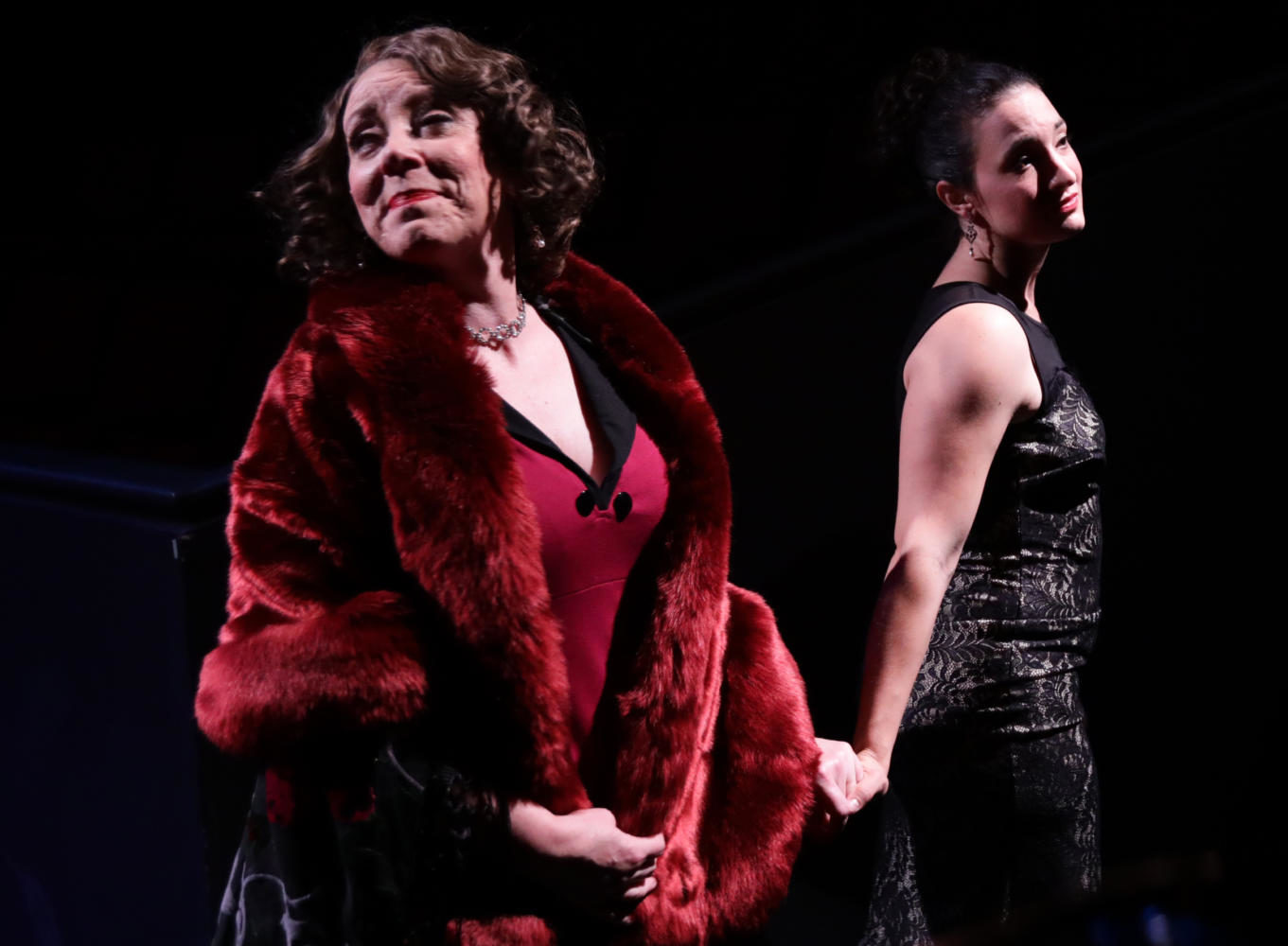 Leigh Barrett (left) is Rose and Kirsten Salpini is Louise in in Lyric Stage’s production of “Gypsy” though Oct. 8, 2017.

“Gypsy” opened at Lyric Stage on the first night of September and was a big old Broadway jewel in a very intimate nook of Back Bay.

Lyric Stage, Boston’s oldest professional theatre, was founded in 1974 by Ron Ritchell and Polly Hogan and recently has had some smashing successes such as “My Fair Lady,” “Into The Woods,” and “Avenue Q.” The 234-seat theater is such a small space that the back row can see even the slightest facial contortion. Before the show, producing artistic director Spiro Veloudos spoke to the audience face-to-face about kicking off his 20th season at Lyric with “one of the best musicals ever written.”

“Gypsy: A Musical Fable” is a story about archetypal stage mother Rose and her quest to take her family vaudeville act to success, with music by Jule Styne, lyrics by Stephen Sondheim, and book by Arthur Laurents. “Gypsy” draws inspiration from the autobiography of famous striptease artist Gypsy Rose Lee, one of Rose’s daughters. Leigh Barrett stars as Mama Rose, resuming the role 10 years after her performance in “Gypsy” at Stoneham Theatre.

Act 1 follows Mama Rose parading her daughters June and Louise around the vaudeville circuit of the 1920s. June, played by Kira Troilo, is a darling ham filling the spotlight, and Louise, played by Kirsten Salpini, is her shy and awkward antithesis. After Rose charms an ex-agent into rejoining the theater business as their manager, her troupe starts an act called “Baby June and Her Newsboys.” The story moves forward several years to find the troupe performing nearly the same act until all the kiddies, now grown up, decide to leave — except Louise.

Act 2 sees Rose attempting to make Louise the star of a new kiddie act, yet between her obvious lack of talent and the downfall of vaudeville, the troupe is going broke. After the act is inadvertently booked at a House of Burlesque, Rose promises to let Louise leave the business after two final weeks of performing. Yet, when an opportunity for stardom, even in burlesque, arises, Rose can’t resist volunteering her daughter, catapulting Louise’s successful striptease career. In the aftermath, Mama Rose loses not the act, but both her daughters and her manager, with whom she fell in love. The musical fable closes with Louise forgiving Rose.

In her Lyric Stage directorial debut, Rachel Bertone opened the show with an original twist. Rather than introducing actors at Uncle Jocko’s kiddie show, the famous overture saw dancers closing what appeared to be the end of another show, and Mama Rose frozen in its spotlight. The show then proceeds with tradition, anticipating the famous “Sing out, Louise!” In the Q&A session following Sunday’s performance, Bertone explained that her emphasis on storytelling motivated her to offer deeper insight of Rose off the bat.

The young actresses playing Baby Louise and Baby Rose were precious and certainly filled the shoes of their predecessors.

Between the brassy Broadway band and Barrett’s powerhouse vocals, the music captivated the cozy Lyric space. In the final number of the show, the quintessential “Rose’s Turn,” Barrett occupies the whole stage and more as Rose undergoes maybe her one moment of true self-reflection. Barrett doesn’t make it easy for the audience.

During several scenes, such as that before “Some People,” the blocking felt perhaps overly simplistic, but Tulsa’s “All I Need is a Girl” choreography built up to the ostentatious Broadway gush the show is adored for.

Maybe the best part of the production was the Burlesque House number, “You Gotta Have a Gimmick,” featuring strippers Tessie Tura, Mazeppa, and Electra in their horrible and wonderful garb. Actress Kathy St. George, playing Mazeppa, hit every beat on the nose and had the audience roaring. Adorned with an excess of tacky jewelry and frills, the fairy godmothers gone wild were costumed authentically, not too clean-cut.

Lighting could have been utilized more to up the brassy flashiness, but was keen and unsettling red during “Everything’s Coming Up Roses,” and the vanity-esque lightbulbs illuminating “Rose’s Turn” were a good touch.

The show appeared to run smoothly aside from a few technical issues: scene changes, a distant ringing noise during a few scenes, a prop rolling around during a dance number.

Despite the familiar and important themes of identity, dreams, and family, I would wait a few years before bringing young children to see “Gypsy”. Strippers and other harsh realities of show business are more PG-13 than G-rated. (And Lyric Stage policy bars children under 5 from seeing shows.)

Overall, Lyric Stage’s “Gypsy” was an entertaining and intimate production. I would recommend it to musical aficionados and theater-viewing amateurs alike.

Emma James is a correspondent for the Raider Times.