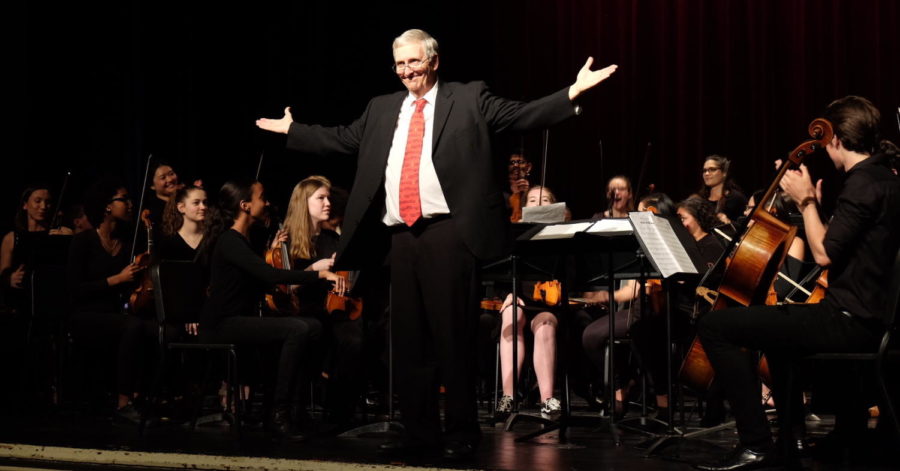 Gallery|19 Photos
Raider Times photo / Lucy Capone
Dr. Frederik Schuetze, who is retiring at the end of the school year, takes a bow after leading his students in “Nimrod,” his last piece during Watertown High’s annual Spring Concert on May 16, 2018.

The Watertown High School auditorium filled with excitement May 16, 2018, for the annual spring concert as audience members enjoyed performances by students in the jazz band, band, chorus, string ensemble, and the a cappella group, the Watertones.

However, this spring concert marked the last WHS concert for Dr. Frederik Schuetze, strings teacher and conductor of the string ensemble at the high school, who also travels around to Watertown to teach at the middle school and all three elementary schools. he is retiring at the end of the school year after 14 years in Watertown.

More than two dozen of his former students joined this year’s string ensemble on stage to perform together.

For his last piece of the concert, Dr. Schuetze conducted “Nimrod” from “The Enigma Variations”, a piece he had saved for many years as the last piece he would ever conduct. He explained beforehand to the audience that “Nimrod” was an Edward Elgar piece that tied him to his father, and he reminisced on the times where he would sit by his father’s feet and listen to recordings of classical music, “Nimrod” being one of them.

His father would forever live in his memory, and Dr. Schuetze will live forever in the memories of the audience at the concert.

Lucy Capone is a member of the Raider Times staff.