“Luzia: A Waking Dream of Mexico” at Suffolk Downs in East Boston through Aug. 12 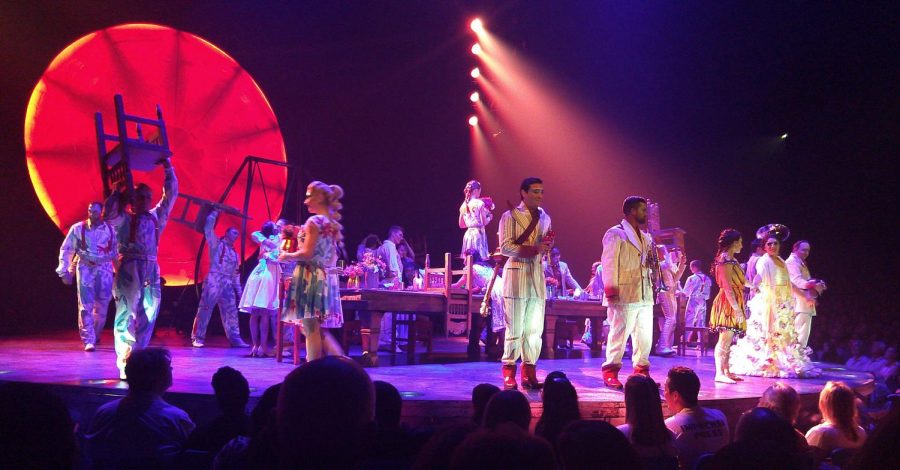 The rotating stage is one of the many creative twists in "Luzia", the newest show from Cirque du Soleil, at Suffolk Downs in East Boston through Aug. 12, 2018.

What if you found a key in the middle of the desert, would you turn it? Well you don’t have to wonder because “Luzia” will turn the key for you, all you have to do is go and see it.

“Luzia: A Waking Dream of Mexico” is the newest Cirque du Soleil show, and it is at Suffolk Downs in East Boston from June 27 to Aug. 12, 2018. The show revolves around a man who is skydiving and stumbles upon a wind-up key that he decides to turn, which shows him a new world.

It is a theatrical show with hidden surprises everywhere. There are many extravagant acts such as pole climbing, hoop diving, ariel acts, and contortion. In every act is always a hint of the show’s theme, Mexico. Whether it be the music, the cacti trio, or the various animals, they all help create the ambiance of Mexico.

All of the acts on Opening Night were very good, even though there were a few minor errors but the performers recovered quickly and continued with the show. The atmosphere is very fun, and not your average circus. The event is inside a giant tent with two rooms — one where popcorn, snacks, and souvenir items are sold, and the other being the arena for the performance.

There was a lot of thought and effort put into creating the show. The costumes that the performers wore were beautiful and for the most part resemble some sort of an animal. There were fish, birds, a butterfly, and many more. The show was stunning, it was full of bright colors and it had a very versatile set. Depending on the act, the stage would be arranged to have what was needed for that act, whether it be large swings or a clear stage to allow for room, and the stage was always moving.

Another cool component was it rained on stage. At one point in the show, they even used the water to create shape and images as the water was falling. The water helped accentuate the acts to make them even more impressive.

The show also used a few gorgeous puppets that were shaped as animals, although they weren’t used nearly as much as they could have been.

Overall, I really enjoyed the show. It is a family show that has something for everyone. I have seen a few other Cirque du Soleil  shows and I think that this one is very good. If you have seen a lot of their other productions, many of the acts will overlap. The acts I have seen before in other shows included hand balancing, contortion, swing to swing, juggling, and many of the aerial stunts. Of course, “Luzia” did have some new acts that I had never seen before, such as hoop diving. However, the overlap in the acts doesn’t take away from uniqueness of the show. My personal favorite act was the contortionist (Alexey Goloborodko) who is known as the most flexible human in the world. His acts was truly astounding and left me without words.

The show the show is ruining from now to Aug. 12, 2018. If you are a huge fan they are selling VIP tickets to this shows.The VIP ticket includes early entry, catering in Mexican cuisine, an open bar, and the best seats in the house. There are also other tickets that allow for the same view as the VIP tickets without the other benefits for a much lower cost. Parking is available for $20.

(To buy tickets of for more information, go to the Cirque du Soleil’s home page at https://www.cirquedusoleil.com/luzia.)