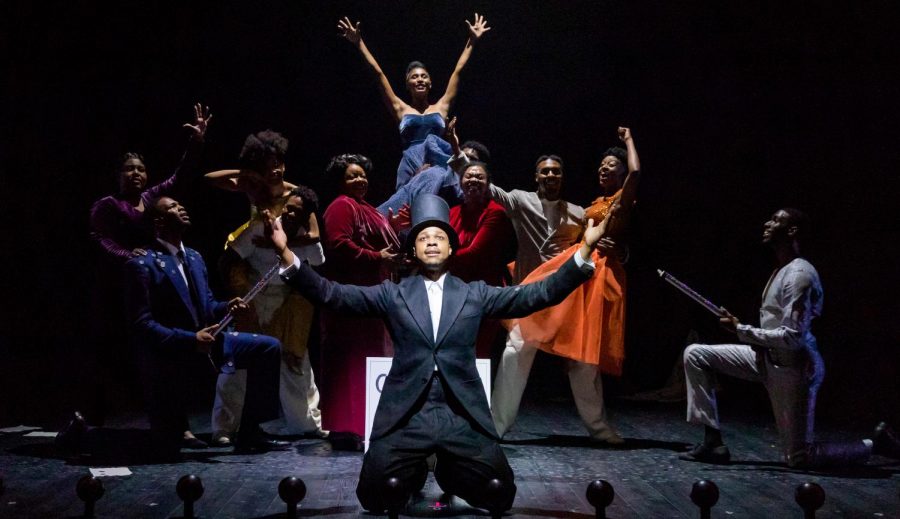 The cast of “The Black Clown,” which is playing at the American Repertory Theater in Cambridge through Sept. 23, 2018.

“You laugh because I’m poor and black and funny.”

This is the powerful opening line of the Langston Hughes poem entitled “The Black Clown,” and also the first line the audience hears in the new American Repertory Theater production of the same name. “The Black Clown” at A.R.T. consists of a diverse cast that uses the narrative of Hughes poem as its script, as well as new music and lyrics written for the show, taking the audience on a journey through the struggles faced by the black community, from slavery to modern day.

Davóne Tines leads the cast as “the black clown,” narrating the story and breaking the fourth wall, with a performance that is reminiscent of a ring leader in a circus. Tines’s bass-baritone voice is breathtaking, but some of the most powerful moments within the show are when he is completely silent, looking directly into the audience unmoved.

The ensemble of this show brings vibrancy and excitement through their dancing, and all around commitment to the story, being able to transform from an upbeat, lively number, to one more serious and dark.

Chanel DaSilva’s choreography performed by the cast plays a huge role in the show, by adding movement that resembles a ventriloquist dummy, highlighting an underlying theme of the restraints people of color are faced with. Not only that, but a stunning solo movement piece during the song “Sometimes I Feel Like a Motherless Child,” brings raw emotion, not only from the cast, but also the audience, to an already emotional sequence.

The cast, choreography, movement, and songs highlighted the metaphors created within the poem, as well as new ones, relating to the overall theme of the piece.

The minimalistic set design and interesting costume choices for the cast create the overall atmosphere of the show. The musical uses screens and silhouettes during a portion of the show that transports the audience back to the time of slavery. Shadows of the actors performing what looks like field work and other images are portrayed to the audience through the separation of the screen, implying that the barrier is the barrier created by oppression. The screens are then pushed back during a sequence that documents the signing of the Emancipation Proclamation, creating the metaphor for the illusion of freedom, with the ever-looming walls of oppression and racism standing in the background.

In a powerful conclusion, the screens are torn away by the cast in a moment of joy and freedom. The minimal set allows for a stripping down, drawing all of the attention to the cast and the story, making every set piece purposeful and carry more than one meaning to the story.

In addition to the set, the costume design creates clear transitions in the show, with the cast wearing all black outfits to later colorful outfits of the same style.

The show ends like the poem, in a powerful conclusion that symbolizes a regaining of freedom with the simple words: “I’m a man!”